Trevalgan is a hamlet between St Ives and Zennor off the B3306. It was historically a mining and agricultural area. The easiest way to now locate the chapel is to ‘sat nav’ ‘Trevalgan Touring Park’ or ‘Trevalgan Holiday Farm’ which occupy the original farming area. The farm is run by Russell and Melanie Osborne who also keep bullocks. The chapel is now a garage/store which stands on the right at a fork in the lane before you get to the touring park. This profile of Trevalgan Primitive Methodist Chapel has been compiled by Val Thomas of St Ives Old Cornwall Society. 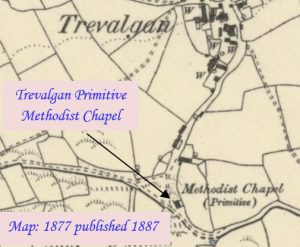 1835 The Chapel was founded and had seating for 110. It is listed as number 49 in ‘My Primitive Methodists’.

1841 From the census I count 67 people as living in Trevalgan: mostly tin miners and farmers. There is 1 fisherman and 1 school mistress as well.

1851 John Stevens was steward at the Chapel. A John Stephens is listed on the Tithe map as being at “Great Croft”, an arable farm on nearby Rosewall Hill.

1872 February 10th. The Royal Cornwall Gazette, Saturday.  “…Missionary services were also held at Lelant, Trevalgan, Nancledra and Balnoon. Sermons were preached on the Sabbath and meetings held during the week in each place”.

The Rev. James Hawkins 1835 -1885 was born in Gloucestershire. In 1857 he became a local preacher. He was Superintendent at Penzance in 1861 with the Rev. C.T. Harris of Penzance who said he was “a kind a judicious superintendent.” He stayed for 2 years. Then in 1863 he moved to Bath, 1865 St Day, St Ives in 1866 for one year, 1867 Seend Cleeve, 1869 St Austell, 1873 Monmouth then back to Penzance in 1876 for two years and 1878 St Ives for three years before being moved out of County again. While in St Ives for the second time he had a serious illness which prevented his ministerial work for 3 months. He had 8 children. 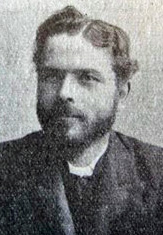 The Rev Frank Shergold 1857-1921 was born in Wiltshire to parents John and Harriet. John worked the land. He began as a boy preacher at the age of sixteen in the Salisbury Circuit. His circuits included: St Day 1877, St Ines 1880, Penzance 1883 and then he moved to Dunstable in 1886.

1883 Kelly’s Directory of Cornwall. St Ives (1) – “The Primitive Methodist chapel in Fore Street, erected 1831, has 800 sittings, and there are smaller chapels at Balnoon and Trevalgan.” 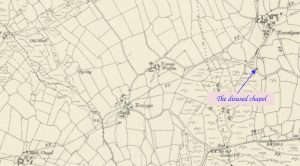 1906: The chapel is no longer listed as being in use. The building is still shown, however.

1907 Most shafts in the area are now abandoned and marked ‘old shaft’ on the map. Wheal Racer was briefly reopened in 1907.

2021 The building is now a garage/storeroom. 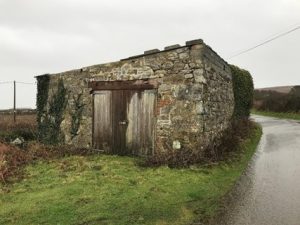 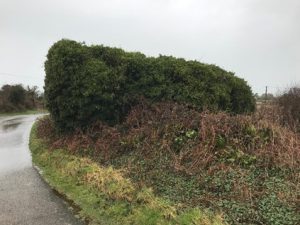 The back of the chapel is covered in ivy and is almost invisible from the lane before turning off to the farm. There was no way to get to the other side. 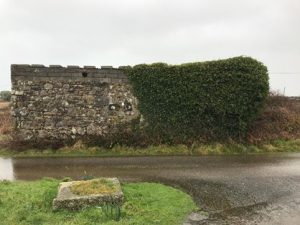 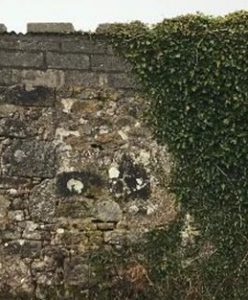 The roof would originally have been pitched so to fit a sloped roof the right side has been built up with concrete blocks. There is also evidence that a window has been in-filled with granite to the left of the ivy.

I can find no records at Kresen Kernow for the chapel, and no records of it being part of an Estate to be sold. It would have been on land owned by Edward Hain’s ‘Porthia Estate’ which was sold by his daughter, Mrs Bullivant over a period of years. Prior to that it would have belonged to another large estate; perhaps the Bolton Estate.

The image and text below are from a book on ancient inscribed stones -Cornish Archaeology nos 37-8 1998-9- Hendhyscans Kernow. 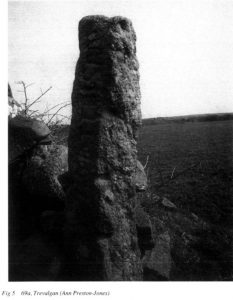 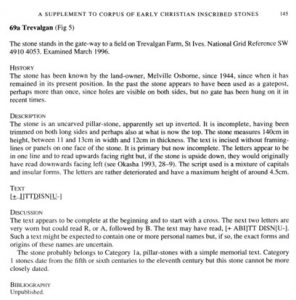 ‘Find my Past’ newspaper articles.