The hamlet of Hicks Mill is a short distance to the east of Bissoe. This profile of Hicks Mill Bible Christian Chapel has been compiled by Tony Mansell.

“The origin of the Bible Christian Society that erected a small sanctuary close to the corn mill has been mentioned in several previous publications including Bourne’s ‘Life of Billy Bray’ and Maker’s volume entitled ‘Cob and Moor Stone’. It is as clear from these records as from Bible Christian Magazines that the activities of the Society became so rapidly progressive to render several extensions to the structure very essential. When the Church was at the height of its powerful influence the total premises were so inadequate that certain weeknight meetings were held on the premises known as ‘Chycoose Vean’…” (Hicks Mill Methodist Church Website)

Circa 1807: “The family of Thomas Tregaskis purchased the Hicks’ Mill…A thatched barn (no longer thatched but probably still standing?) adjoining the mill became a ‘Bethel’ to him…The first chapel was erected a little way from the barn ‘on the same estate’. Obviously ‘Chapel Farm’ and the mill originally belonged together as one holding.” (Hicks Mill Methodist Church Website)

1821: “Having ‘secured the necessary materials and with the assistance of a few of his friends, Tregaskis commenced to build a church’. By August 19th 1821, the work was done.” (Lawrence Maker in his ‘Cob and Moorstone’)

1831: “The Bible Christian Conference was held at Hicks’ Mill Chapel.

1851: “The Bible Christian Conference was held at Hicks’ Mill Chapel.

The chapel was “enlarged a third time, being raised higher, with the addition of front and side galleries. Commodious Schoolrooms had also been erected adjoining the chapel’. These were completed with [the 1861] Conference in mind. (Hicks Mill Methodist Church Website)

1861: “The Bible Christian Conference was held at Hicks’ Mill Chapel.

1871: “The Bible Christian Conference was held at Hicks’ Mill Chapel.

1888: “Hicks’ Mill Bible Christian Chapel. This chapel was re-opened on Thursday June 7, after extensive alterations. The Bible Christian cause here is of long standing, the first chapel dating as far back as 1821. This was built by the late Mr Thomas Tregaskis and was opened by the venerable W. O’Bryan and James Thorne. The congregation rapidly grew, and in order to meet the society’s requirements the chapel three years later had to be enlarged. Other alterations and enlargements, including the erection of galleries, &c. were subsequently made from time to time…The chapel has been entirely re-seated on the ground floor, the interior newly decorated, the old doorway built up and an entrance made from the north end, with access to the galleries on either side of the lobby; the front cleaned and pointed, and new windows put in. Altogether it presents a very attractive appearance. Re-opening services were held on the 7th inst. The day’s proceedings commenced 11 o’clock, when an admirable sermon was preached on the miracle of the loaves and fishes by the Rev. J. Dymond, of Exeter. This was followed by public luncheon, to which a large number sat down… The total cost of the improvements will be about £290, one half of which has thus been raised in cash and promises.” (Cornubian and Redruth Times – Friday 15 June 1888)

1909: “Hicks Mill Chapel. Hicks Mill is situated in the parish Gwennap, Cornwall, about mid-way between Truro and Redruth. The population is small and sparse. The locality probably received its name from a mill, occupied for many years Thomas Tregaskis. The Bible Christian Denomination had but few chapels in its early days. Our fathers proclaimed the great verities the Gospel where and as they could by the roadside, under wide-spreading oak, the village green, in the humble cot and farmhouse kitchen. Straw-covered barns, too were made use of. The one adjoining the mill referred to had often been to the miller a Bethel, and granted to others the privilege sharing there in the same blessings. Within its mud-built walls were frequently proclaimed the glad tidings of salvation through the blood of the Lamb. Hicks Mill has been famous in Bible Christian history. The first chapel was opened on August 19th, 1821, and the preachers were Wm. O’Bryan and James Thorne. The congregations were large – hundreds were unable to enter – and the services were marked by great spiritual power. In the ‘New History the Bible Christians’, the Rev. F. W. Bourne says, ‘The chapel was erected chiefly through the zeal and generosity Mr. Thomas Tregaskis. It soon became the birthplace of multitudes of souls, so that its enlargement became necessary, and in 1824, when it was re-opened, William Reed preached the first sermon. Subsequently other enlargements and alterations were made, until it came to be the spacious, square-built structure, capable of holding four or five hundred persons.’ In the ‘Jubilee Volume’ of the late B.C. Connexion, where Hicks Mill figures somewhat prominently, it is said that the enlargement of the chapel was ‘the first time’ by adding to its length; the second time by adding to its breadth. A commodious schoolroom was built in 1861. There are also vestries…” (The Cornish Telegraph – Thursday 15 July 1909) 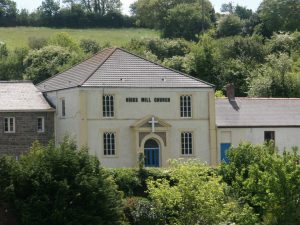 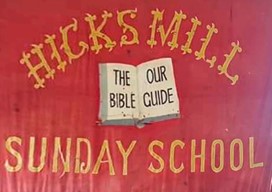 For a fuller story of Hicks Mill Methodist Church you can visit their website: http://www.zen181726.zen.co.uk/hcksmll.htm#The%20History%20of%20Hicks%20Mill%20Methodist%20Church