Callestick is a hamlet about 5 miles (8.0 km) north-west from Truro and about 1 mile (1.6 km) south of Perranzabuloe. The manor of Callestick was recorded in the Domesday Book (1086) when it was held by Robertm Count of Mortain from Bodmin Monastery; before 1066 it had been held by a thane from the monastery. This profile of Callestick Wesleyan Chapel has been compiled by Tony Mansell.

“A small congregation gathered at Callestick in the home of Samuel Lawry, around 1799. Catherine Cowlin, the host’s young sister-in-law sat at the back of the room…” (A History of Cornish Methodism by Thomas Shaw)

1896: Lease for 99 years or three lives, Callestock Chapel in Perranzabuloe

Parties: 1) William Withiell, gentleman of Perranzabuloe / 2) Hambly Inch, yeoman of Perranzabuloe. Plot of waste ground measuring 46 feet from east to west and 26 feet from north to south, upon which 2) has lately erected a chapel or meeting place; excepting a pew in the north west corner of the said chapel which 1) has built at his own expense to be used by 1) and his wife Constance for the term of their natural lives. Term: 99 years or the lives of Paul Clarke, son of Paul Clarke, gentleman of Perranzabuloe, aged 21 years; Nicholas Cowling, son of William and Ann Cowling of Callestock in Perranzabuloe, aged 12 years and Richard Inch, son of Hambly and Jane Inch, aged 12 years. Consideration: the erection of the said chapel and rent of 2 shillings 6d per annum.(Kresen Kernow AD1097/3/1) This plot of land is too small for the 1899 chapel. It does say “lately” but maybe this word should not be considered literally in which case it may relate to an earlier chapel.

The chapel had its own burial ground. 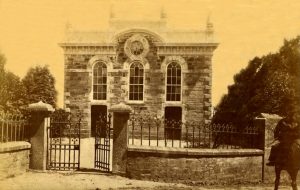 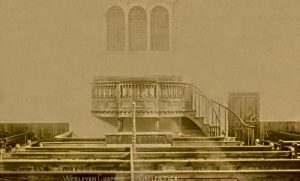 The name of the hamlet of “Callestock” was changed to Callestick because the postal service was muddling it up with Calstock. (Chris Easton, President Perranzabuloe OCS)

Noncomformist Chapel (19th Century to Unknown – 1850 AD) / Sunday School (19th Century to Unknown – 1850 AD**) Sunday Schoolroom surviving behind mostly demolished Wesleyan Methodist chapel. Circa mid C19. Now in the process of being redeveloped on the chapel site as a house. Stone rubble walls with brick arches; slate roof. Original sash windows with fanlight heads. Road-frontage walls. (Cornwall Council Interactive Map) **Could the Sunday school have been an earlier building which had been used as a chapel?

The Sunday school was converted into a dwelling.

Susan Coney of Truro said, “The gate posts and the railings are those of the former chapel [1899 chapel]. My partner attended there in the 1950s and 60s for harvest festivals as it was his parent’s chapel before the war when they farmed at Lambriggan. He said it was a beautiful chapel, very much like a miniature St George’s Chapel, with a choir and balcony.”