Rejerrah is a hamlet near Cubert east of the A3075 main road to Newquay. This profile of Rejerrah Wesleyan Chapel has been compiled by Tony Mansell. 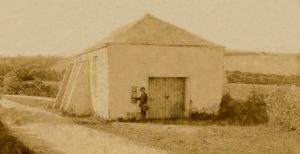 1901: “Rejerrah Wesleyan Sunday School – Laying of Memorial Stones. The memorial stones of the new Wesleyan Sunday-school at Rejerrah were laid on Thursday last amid the reverent and heartfelt joy of the members of the denomination. Lying almost equidistant from Cubert, Newlyn and Zelah, the church at Rejerrah meets the spiritual needs of a large and isolated agricultural population… The Sunday school, established in 1890, has been carried on in the old chapel, several hundred yards from the present sanctuary, but the dilapidated condition of the building compelled the stewards to find safer and more comfortable home for the School, and modern and commodious structure is being erected to the rear of the chapel, so that public worship and Biblical teaching will be conducted under one roof. The school building will be of elvan with granite facings, the elevations and internal fittings corresponding with the chapel, communication with which by a door on the north side. The scholars on the register now number between 50 and 60, and the new school will provide accommodation for nearly 150. The building will probably be opened near the 1st of December. The raising and haulage of the stone, and the clearing of the foundations representing financial value of over £l00, was done entirely by members of the church, and the contract for the building was let to Mr. W. Tippett. Newquay, for £220, the plans being prepared by Mr. Sampson Hill, Redruth. Prior to Thursday’s ceremony a balance of £75 stood the credit of the Sunday School trustees, and it was hoped to increase this to over £100 during the ceremony and services. Typical September weather favoured Thursday’s function. The sun shone brightly from cloudless sky, emblematic of the brightness which filled the hearts and was reflected in the faces of the sturdy sons and daughters of Methodism who assembled in front of the rising walls of the new building. The Rev. W. Hodson Smith, supt. of the North Cornwall Mission, conducted the proceedings, which were throughout hearty and reverent and free from pomp and ceremonial. Rev. Lewis Thomas, resident minister, and the Rev. J. B. Gratton, Perranporth, supported their chief minister. The honour of laying the memorial stones was gracefully bestowed, irrespective of creed, on individuals who have proved themselves true friends of Methodism and the selection of Mr Alfred Rowe, of deserving tribute was paid to a gentleman who, though devoted member of the State Church, has lent his sympathy and support to all genuine philanthropic and religious effort in the district, whether by Church or Dissent.” (Royal Cornwall Gazette – Thursday 3 October 1901) 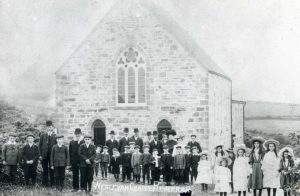 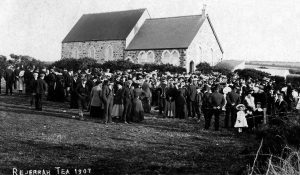 Chapel and Sunday school converted into a dwelling.

An early Sunday school is recorded at the location shown on the cover map, the associated chapel is located to the east (MCO32310). A building is recorded in the same footprint as that of earlier maps suggesting possible survival. Google Streetview (June 2009) captures a single storey sloping corrugated asbestos roof. On the roadside there is a brick and concrete blocked-up window in what appears to possibly be part of an earlier building. The eastern end has a block-built wall with a wide door, possibly used as a garage, but more likely a store. (Cornwall Council Maps) 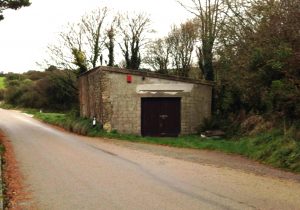 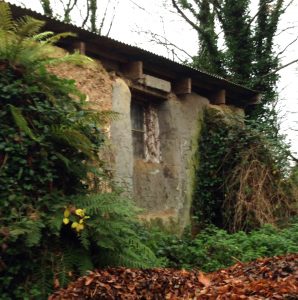 Wayside Wesleyan chapel and attached Sunday school, all now converted to a house and side elevations of chapel altered to provide 1st-floor fenestration. Late C19. Local killas with granite dressings. Unusual Gothic style example with plate tracery to large end window of chapel; pointed-arched doorways to ground floor. Methodist Chapel is annotated on the 1st Edition 1:2500 OS map c1880 with Sunday School recorded against a separate building (MCO56783) to the west at the crossroads. Sunday School (western side of building) and Methodist Chapel are annotated on the 2nd Edition 1:2500 OS map, suggesting that the school was added between c1880 and c1907. (Cornwall Council Maps)