Madron is a village in west Cornwall, a few miles west of Penzance. This profile has been compiled by Val Thomas of St Ives Old Cornwall with information from Colin C. Short’s book ‘In Spite of Dr. Borlase’s The Story of Methodism in Madron.

The Primitive Methodist Chapel is on the north side of Fore Street and is now a house call ‘Old Chapel House’ and is on the right side of the village before the 1960’s estate which has been built. It is opposite the cemetery. One of the earliest societies in this area was established in Boswednan in 1928, but Penzance and Newlyn dated from about the same time. We don’t know when a Society began in Madron. There are references to preaching in the village in 1830 and again in 1843. In 1843 a Penzance circuit separated from St Ives but it was not until 1857 that a Penzance Primitive Methodist Circuit was established on a more permanent basis.

1839 Mount Street chapel was the first chapel opened. (No longer used for worship.) 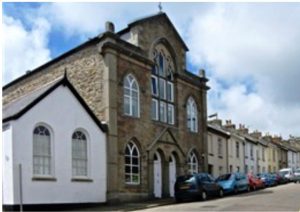 1847 The chapel was built in Madron. Like the Wesleyan Chapel it was held on a lease as all the land n the north side of the road was owned by Ambrose Taylor, Parish Clerk and the son of the Church Vicar.

1851 The Religious Census declares the 60-seat chapel to be about four years old. It also indicates that services were held in the afternoon and evenings with 20 to 25 worshippers at each service on census day. There was no Sunday School at this time. The return was signed by Henry Nicholas, Leader, of Crankan, Madron. (Crankan is on Bone Valley, Heamoor now, but would have been deemed to be in Madron at that time).

1857 Until this date the Bible Christian Chapels formed part of the St Ives Circuit. In 1857 Penzance became a ‘Branch’, and two years later, in 1859, it became an independent Circuit.

1858 A Primitive Methodist plan dated July 18th – October 10th shows Madron in third place on the list after Penzance and Newlyn with a service at 6pm on Sundays, and every fortnight, midweek on a Wednesday. It also mentions, on August 8th, a Camp Meeting. These open air meetings were characteristic of Primitive Methodists and Bible Christians and holding them was the reason that Hugh Bourne was expelled from the Wesleyans. The meeting started at 2pm with speakers taking it in turns. The speakers on this occasion were Edward Powell, J. Whitford of Penzance, C Kessel of Coombe and T. Pascoe of Gulval. The meeting at Madron concluded with a Love Feast in the evening, which was a fellowship meal with a Love feast Loaf, often specially baked and a Loving Cup containing either water or tea passed around as a common cup. Normally Love Feasts were held in the chapel. The quarterly Membership tickets, similar to the one below, were issued at the Wednesday class starting at 8pm with Rev. Edward Powell. 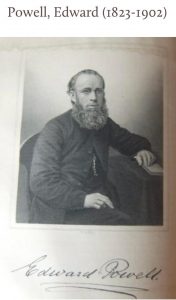 The Rev. Edward Powell died in 1902 in Glamorgan. He was active in many circuits around the Country including: 1846 in Ramsgate, 1854 in St Austell, 1858 in Penzance, 1865 in St Ives. He seems to have retired in 1887. Information from ‘My Primitive Methodists’. Author:  Geoff Dickson. 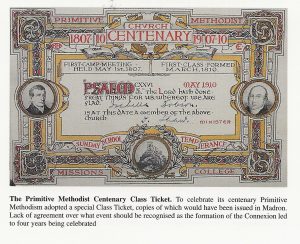 1859 Chapel Anniversary was held on Sunday October 17th. The preachers were the Superintendent Minister, Rev. Edward Powell and Mr J. Whitford, a local preacher from Penzance. He spoke again at the public meeting that followed the tea on the Wednesday. On Wednesday 19th September Henry Worth, from Newlyn, held a Temperance meeting which took place once in the quarter in every place in the circuit having a midweek meeting: except that Newlyn had two! 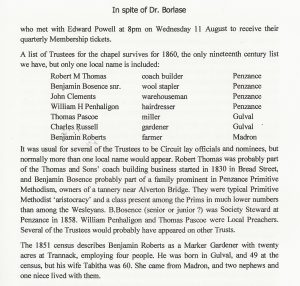 1865 A ‘Prayer Leaders Plan’ for the quarter April16 to July 19 survives. It is a printed document naming ‘Prayer Companies’ of a leader and 4 others who would promote prayer meetings among the societies. The Madron Company is listed for 8am on Sundays, three times in a quarter and fortnightly on Wednesdays at 7.00pm.

1875 The Cornish telegraph newspaper reported the reopening of the chapel on June 20th after painting and decorating. On the Sunday the preacher in the morning was Mr P. Lobb of Madron and Mr J. Britchland of Chester was the evening preacher.

1895 January. Permission was asked to use the Council room on Wednesday evening for a choir supper.

1903 Chapel anniversary was celebrated in April with a ‘service of song’ rendered by the choir in the afternoon to a good congregation. Master S. Buckley presided at the harmonium. A platform meeting was held in the evening. On Good Friday 100 people sat down to a public tea. In the evening a platform meeting was held accompanied by the Mission band. The choir sang and the collection was for chapel funds.

An interesting evening was spent in March watching a lantern service. The pictures were chiefly of the Boer War.

1905 A flower service was held and the chapel was tastefully decorated. Penzance Primitive Methodist chapel choir sang in the afternoon and was greatly appreciated by a large congregation. Mr W.C. Bosence presided at the organ. (Had the harmonium been replaced?) Miss Hocking, a blind lady preacher, led the evening service.

1908 The Cornish Telegraph of April 16th reported that an enjoyable musical service was given on Sunday afternoon by Newlyn Primitive Methodist Chapel choir. Mr J. Vingoe occupied the chair in the absence of the Rev. Howlett who was indisposed; Miss Weeks ALCM ably presided at the organ. The collection was in aid of chapel funds.

On Thursday September 24th the chapel held a harvest festival. Sermons were preached both morning and evening by Mr Oates of Heamoor. In the afternoon there was a ‘service of song’ rendered by the Heamoor Bible Christian Chapel choir under the conductorship of Mr John Laity. Mr J Bennetts Jnr. gave the connective readings and Mr E Symons presided at the organ. A public tea was held on the Monday afternoon with a public meeting held that evening with addresses and the choir singing. Miss Ethel Cock presided at the organ. Afterwards the fruit and vegetables which decorated the chapel were sold with the collection towards chapel funds. The services were well attended and greatly enjoyed.

1914 July. Mr Bosence at the organ and Mr R. Matthews directed the choir in a service of song in the afternoon. This is the last newspaper article for the Primitive Methodist Chapel. It does not say it was well attended! (Many families had, by this time emigrated, mostly to through New York to become miners or market gardeners as my relations had. Also many of my family had died around this time of a cough!) 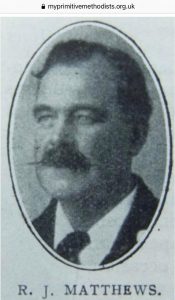 1916/1917 The chapel was finally wound up. Warwick Cock, who had, with his family, been very prominent, had been killed the year before in an accident at Ding Dong mine and his son. Thomas James Cock was on First World War service in India. Certain ‘assets’ went to Newlyn Centenary Chapel.

1932 The final reunion of Methodists took place, reuniting the Primitive Methodists, the Wesleyans and the United Methodists.

1966 The Chapel was being used as a carpenter’s workshop.

The Primitive Methodists became Wesleyans. Thomas James Cock’s son, William Warwick Cock was baptised at the Wesleyan chapel in 1924. In 1931 Thomas James Cock became a trustee of the Methodist chapel. His wife Agnes Mary and son Bill and became trustees in 1949. (The organ in the new Wesleyan Chapel is in their memory) and Bill’s wife Esther became a Trustee in 1961.

This is a Google view of ’The Old Chapel’ in 2020. It is immediately opposite the gates to the cemetery

This 1906 map is inaccurate in the positioning of the chapels. It correctly shows the new Madron Wesleyan in the correct place but has labelled the Primitive Methodist chapel without the word ‘Primitive’.

A Dictionary of Methodism. dmbi.online

In Spite of Dr. Borlase. The Story of Methodism in Madron. Colin C. Short

Find my Past newspaper reports.