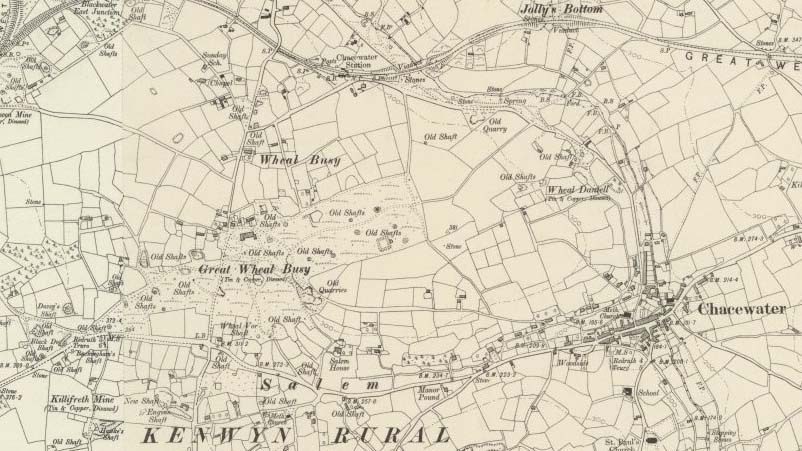 Tony Mansell brings us the story of Wheal Busy Mine and a lesson that it does not pay to celebrate success too early.

Chacewater Mine is in the area referred to as “the richest square mile on Earth and during its lifetime it produced enormous amounts of copper and to a lesser extent, tin and arsenic. Its output rose during the 1720s and from then until its closure in the 1920s, it experienced both good and bad times. Unusually for Cornish mines, it smelted its own copper but not continuously.

There was considerable optimism in 1856 when the mine was restarted. Huge celebrations were followed by a feast in nearby Chacewater when a whole ox was roasted and enjoyed by the residents. The euphoria was short-lived, however, and within a few years the mine was again unprofitable. From then until its closure, it mirrored the fortunes of many other Cornish mines where success was so often followed by disappointment.

“Another Uproar at Chacewater” was written circa 1900 by George Tallack and C Varker, both of Mount Hawke. It is included here by permission of Rodney Grant, George’s great nephew and read by Tony Mansell. It reflects the event of 1856 and includes a clear warning that such celebrations could be premature.

4 thoughts on “Wheal Busy Mine with “Another Uproar at Chacewater””