Emily Thornhill explores the past realities and human history of Cornwall in her second article for Cornish Story entitled ‘Sacred Places’. In this photographic essay she looks at the remains of pre-historic times within the landscape in the form of megalithic sites.

The purpose and use of such places has always been a mystery to us and look like they always will. Despite extensive scientific research and endless conjecture, the theories we have today for their creation are just that; theories. Naturally, when such knowledge is lost to the mists of time and ways of life begin to change, many different interpretations explaining their presence have formed throughout history. A certain mystical quality surrounds these sites, as they now serve as relics of a forgotten past, once home to its own traditions and customs that are little known to us. This series celebrates the ways in which we have attempted to understand these places through storytelling, folklore, myth and legend.

Cornwall, with its flag representing the black ore and white metal of tin, symbolises just how tied to the land its people are and always have been. Its very survival has long involved a deep understanding and respect for the natural world, with fishing, mining and farming forming important sectors of its economy through time. Its unique and remote geography strengthens a distinct cultural identity, reflecting a landscape steeped in history that is almost entirely surrounded by open water and subject to the full force of the elements. Being never fully colonised by the Romans apparently ensured the survival of many megalithic sites that date back to Neolithic times, with Cornwall being home to one of the highest concentrations of upstanding prehistoric remains in Britain.

For me, the inspiration behind making these images came from the folk traditions and mythology of Cornwall, that are so familiar for me from growing up here. These peculiarities are so abundant that it seems every single town and village has their own tales of giants, mermaids, piskies, fairies, witches and beasts that roam the nearby wilderness. It is said that parts of this mythology are derived from seafaring pirates and smugglers who travelled to far away places and returned with tales of bizarre and fascinating creatures. However, many of these legends also centre around the abundance of old stones that are found here, which are both physically and figuratively embedded within the land itself, forming a complex tapestry beneath our feet that connects us to former landscapes and realities. The countryside is littered with a whole range of different enigmatic sites, that have instilled a strong mystical tradition and an emphasis on the sacred into the very heart of Cornwall.

Dolmens, a type of chamber tomb that consist of vertical stones supporting a large capstone, are common in Cornwall, with a high concentration surviving on the Land’s End Peninsula. The table like structures are thought to have once been covered with earthen mounds, with the area below the capstone forming a chamber. General theories centre around these sites being used  within burial and funeral traditions, despite there being an absence of clear evidence to support this. In Cornwall, however,  dolmens such as this are affectionately referred to as quoits. The name derives from a local legend that tells of the stones being thrown into position by Cornish giants whilst playing a game of quoits. One of the most striking quoits of Cornwall is Lanyon Quoit, where it is said that King Arthur ate a meal before his last battle, the Battle of Camlann, sat on  top of the stones. As well as this, the bones of a giant are also said to be buried beneath it. 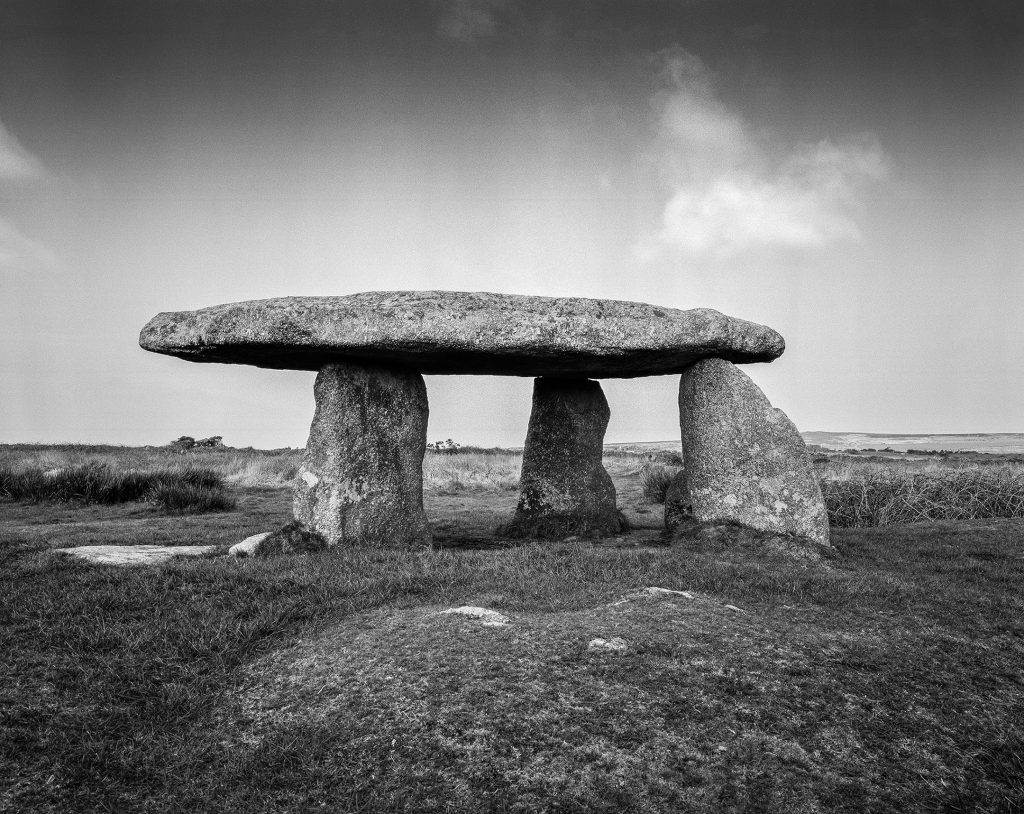 Not far from Lanyon Quoit is Mên-an-Tol, whose name translates to ‘the stone of the hole’. Although these stones are relatively rare, prehistoric holed stones can be found all over the world, with Cornwall being home to quite a few. Mên-an-Tol is thought to date to the Bronze Age and has many legends attached to it. Holed stones have long been used in fertility rituals and it is said that if a woman passes through the stone 7 times backwards under the light of a full moon, she will soon become pregnant. The site is also said to be home to a guardian piskie, capable of curing ailments such as rickets, back pain and tuberculosis. Children are known to have been passed through the stone 9 times naked  in order to sooth these illnesses, a tradition that has taken place for centuries. According to one story, a changeling baby (a fairy child that had been left by fairies in place of a human one they had stolen) was passed through the hole in the stone, with the hope that the mother would have the real child returned to her. Evil piskies had changed the child, but the ancient stones had the power to reverse their spell and the child was safely returned to its mother.

The Merry Maidens of Boleigh Stone Circle gets its name from a story that dates back at least to Victorian times. The circle is said to be all that is left of a group of nineteen local girls who were caught dancing on the Sabbath and petrified as punishment. The two musicians who played for them heard the nearby church clock of St Buryan striking midnight and began to run away but were also turned to stone. They now form the two standing stones found nearby, referred to as The Pipers. The Cornish title ‘Dans Meyn’ was given to all recorded Cornish stone circles pre 1900 and translates to ‘dancing stone’, which is thought to have led to many in the region being associated with dancing rituals. However, variations of this story are also common across the whole country, and it is thought that they were fabricated by the Church in an attempt to eliminate Pagan activity from continuing at these sites. There are around 1300 stone circles across Britain and Ireland, however this circle differs from others when it comes to the regularity of spacing between its stones, making it a truly circular form. The stones themselves were carefully chosen and positioned as they gradually diminish in size from southwest to northeast. This waxing and waning in size is believed to mirror the cycle of the moon, suggesting that they were used for ceremony and astronomical observation. In earlier times there was another stone circle located 200 metres away from today’s surviving circle, but this had sadly been destroyed by the end of the 19th century. 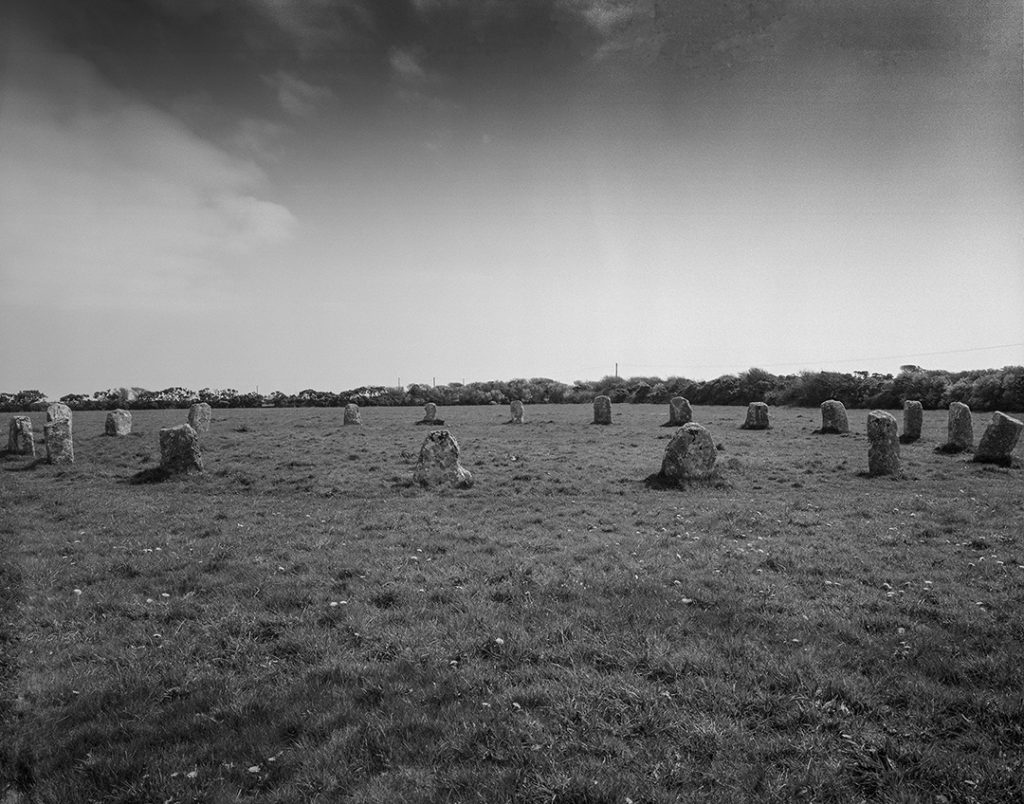 Like most British stone circles, the Merry Maidens has a gap in the eastern section that connects to a path leading to the nearby Tregiffian Burial Chamber, a chambered tomb with a walled and roofed entrance passage leading into a central chamber. This grave is of special interest as unlike quoits it is covered with a mound of soil, leaving only the entrance uncovered, which is lined with stone slabs. One in particular bares 25 rare cup-and-ring markings, a form of prehistoric art that is found all across Europe. It is thought that the 12/13 combination of hollows are directly connected to the cycle of the moon, as in any given year there are either 13 or 12 full moons. This points towards the area being considered a holy place for its creators. Excavations that have taken place within the grave unearthed evidence of human cremation and burial, as an undamaged funerary urn still bearing ash and bone was discovered, which suggests that the site was used over a long period of time as a community grave. 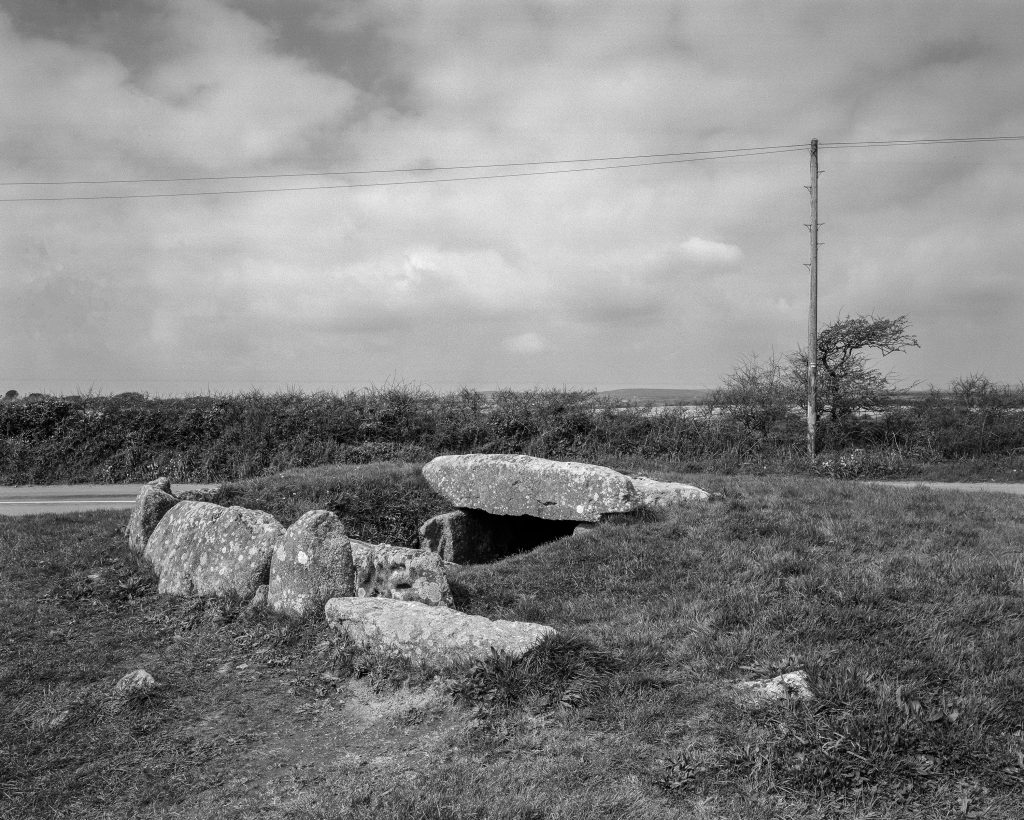 Finally, Chûn Quoit, meaning ‘house on the downs’ sits on picturesque moorland overlooking the sea. It is thought to have been used in tribal and religious ceremonies due to the fact that from its position, the setting midwinter sun is perfectly framed by a rocky hill on the horizon called Carn Kenidjack. Its name means ‘hooting cairn’ and according to local folklore, when the wind comes racing in from the sea in a particular direction, the rocks of the carn actually howl. The carn and the moorland surrounding it, referred to as the Gump, have long been considered to be haunted. Stories of local men being tempted off the path by irresistible music are told, as well as tiny bands of fairies who play little pipes and wear hats made of flowers. However, not all of these stories are so cheerful, with the Gump being said to be home to the ghost of a witch called Old Moll and the carn itself being the home of the dead. A tale of two local miners hearing strange noises whilst walking home across the Gump is known locally. They found themselves being led up to the carn by a strange shadowy figure on a horse and watched as two devils fought each other in the shadows of the rocks. Like other Cornish dolmens, Chûn Quoit is associated with giants. The giant Old Debris the Hurler was said to have lived within Chûn Castle but was killed in a wrestling match by a local man named Tom. From his victory, Tom inherited the castle, but only on the condition that he buried the giant at his favourite seat (the quoit) on the hill looking out to sea.

Whilst making this work, it was important for me to capture these places in relation to the landscape they are a part of, as their position was obviously incredibly important to their creators. At the time of their construction, groups of people were becoming more and more settled and stable, and sites such as these portrayed their heritage and ownership of the land whilst creating their own tribal identity. Many of the quoits found here are in locations that have panoramic views, often spanning across hills, rivers and coastline whilst sitting just below the peak of hills themselves. The alignment of many sites is also intentional and portrays the knowledge of the landscape that these civilisations had, with certain places being deemed sacred and of the utmost importance. In order to communicate this within my photos, I used a large format analogue camera to contain as much of the surrounding environment within them as possible. This camera is very slow and cumbersome, but I enjoyed spending many days walking through landscapes that fell like they had not changed in hundreds of years, with it strapped to my back in order to take these photos. 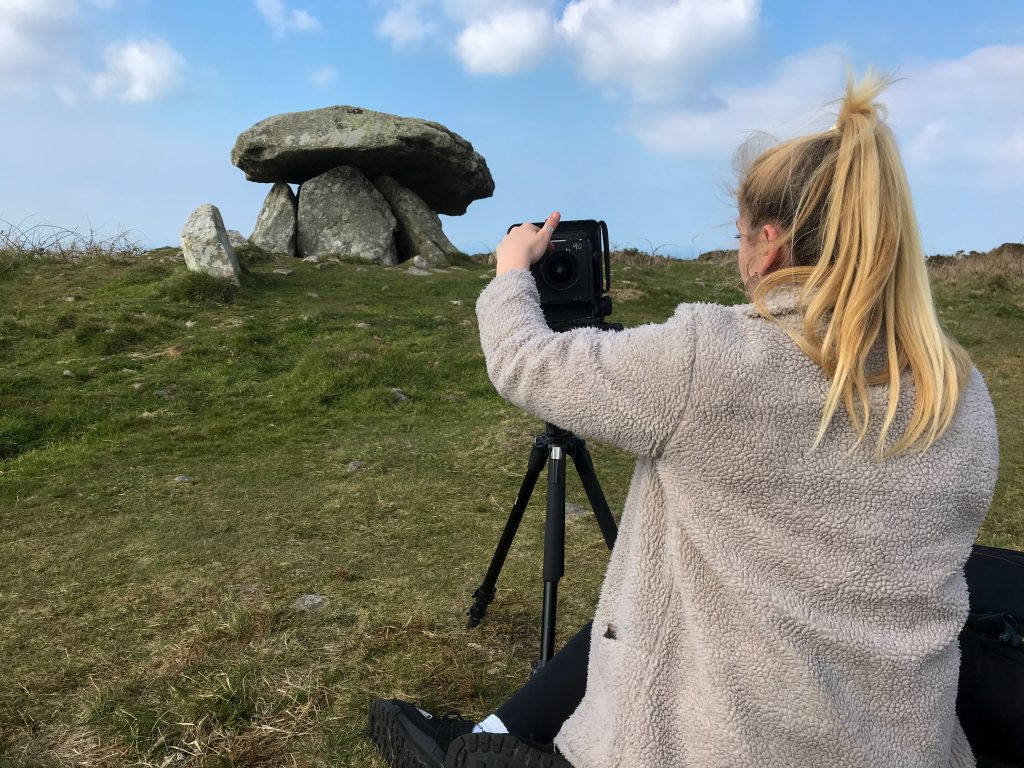 Emily Thornhill is a photographer and visual artist based in the South West. Her practice is heavily influenced by her love for the natural world and the conservation of everything within it, through a childhood spent in Cornwall. She has recently graduated from the University of the West of England with a First Class Honours degree in Photography. 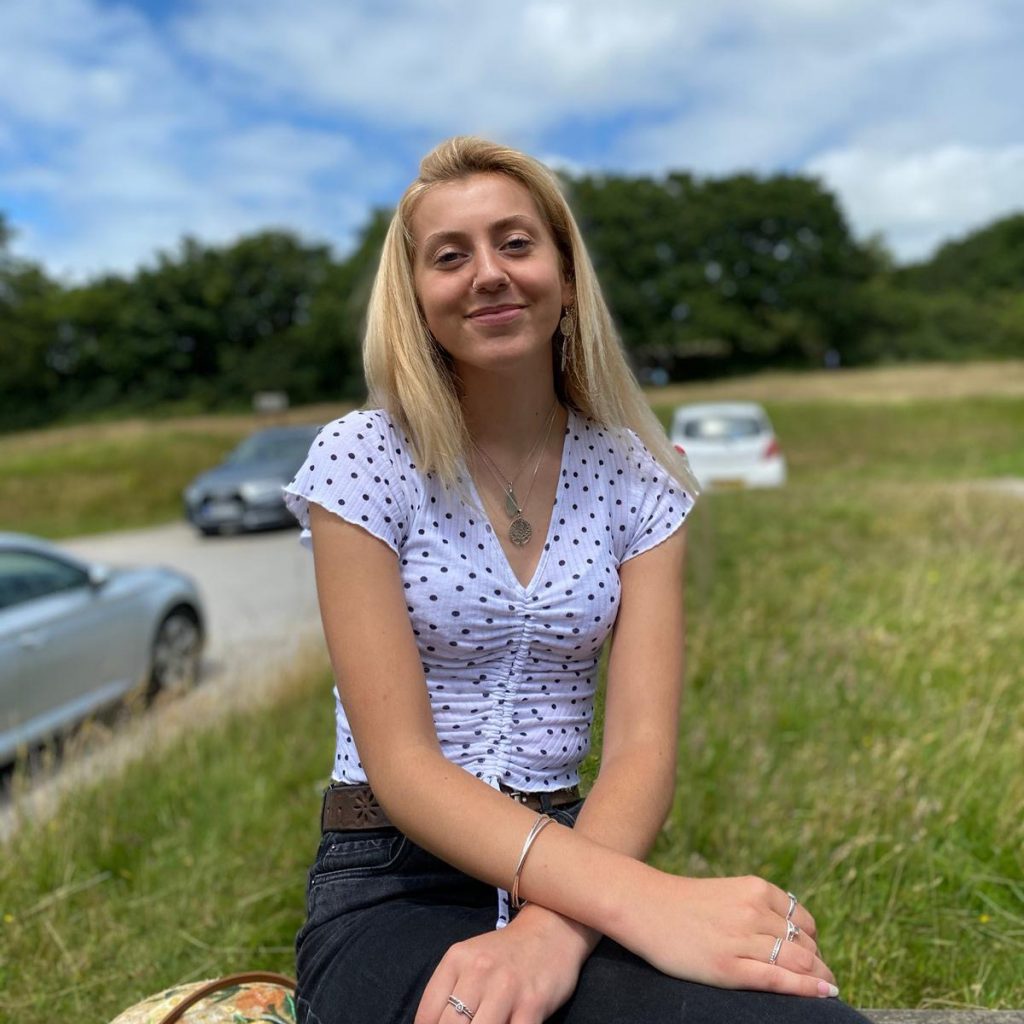