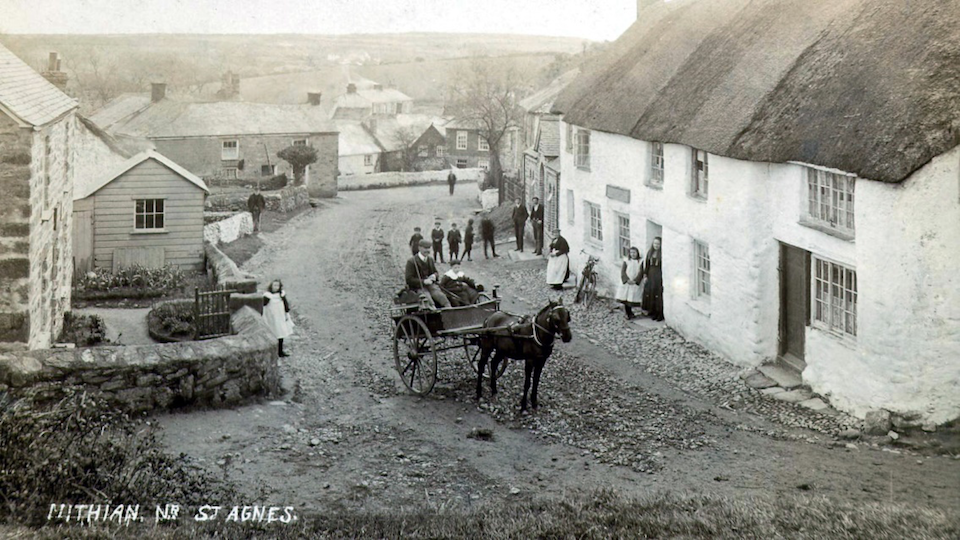 Much has been written about our villages and whilst the smaller ones haven’t been ignored, they sometimes fade into the background at the expense of the larger and better-known communities. In this series the contributors will attempt to remedy that by presenting a picture of life in some of our smaller villages.

Whenever I deliver a talk on growing up in a Cornish village I receive the same response, “That was exactly how it was in my village.” It seems to matter not where folk are from, the reminiscences and stories of village life seem to flick a switch in the memory and the fondness for their place of upbringing comes flooding back.

Of course, it wasn’t all a bed of roses back then, times were tough and in many cases money was short but perhaps that was why special days and events were really special. Presents and treats were not an everyday thing and village celebrations stand out in our memories as important occasions. It was a time of baths in front of an open fire and trips to the little building at the bottom of the garden. Central heating was in the future and even electricity was a luxury. Food was mostly homemade with most of our needs delivered to the door or maybe bought from the little corner shop.

Most villages were built around farming, fishing or mining depending on their location. Metalliferous mining was mainly a thing of the past but it is the stuff of memories albeit often over-romanticised. For the Clay District, of course, the activity of extracting the precious kaolin from the ground was still happening, as it is today.

It seems that no matter how small the community, there was a rugby or football team, and perhaps a choir or a brass band. There was great pride in the achievements of such organisations with those who took part in them raised to the level of local celebrities. There was fierce rivalry too, both on the playing field and on the contest stage but whether it was a morale-boosting win or disappointing defeat it was soon washed away in the local public house – until the following year!

Methodism was strong and the chapel was a place for all things both spiritual and secular. Few village events failed to involve that place and in so many ways it had a tremendous influence on our lives.

The junior and infant schools often catered for a number of smaller communities and were where the young folk gathered together to learn, to play and to forge friendships which would last a lifetime.

Each village had its own character, someone who was known by everyone. Their demise always seemed to bring forth the comment, “We won’t see the likes of they again”. These folk often provided the colour to the community. They were someone to chat with and, of course, about. They were the ones “in the know”, the ones who spread the news, both good and bad. After all, what was wrong with a bit of scandal? Often they relied on the old Cornish adage of, “If tid’n true then it oughta be”.

Above all though, it was the people and their Cornishness which really made our villages distinct: the dialect, the sayings and the humour combined to leave an indelible impression on our minds. Perhaps our friends from the towns were more street-wise than we country youngsters, but I can’t help feeling that they missed out on the unique spirit that existed in the rural communities. Whether that is right or wrong I don’t know but it was certainly how we felt.

Things change, however, and whereas most people once relied on their village for work and play they now find themselves travelling larger distances and mixing with folk far beyond the boundaries of their own little village: easier transportation has changed life for ever. There were changes back then, of course, but they were slower: life was slower. Now, they seem to happen in a blink of an eye.

We hope that this series will revive memories: for those who live in a Cornish community and for those who, for one of a hundred reasons, now find themselves far from their place of upbringing.  The memories will be personal but I feel quite certain that common themes will wend their way through them and that you will recognise them from your very own Kernow village.

Join us next month as we explore the first village in our new series. You can find Tony’s previous series, ‘Music Kernow’ here, and also follow us on Twitter and Facebook to keep abreast of our upcoming content.