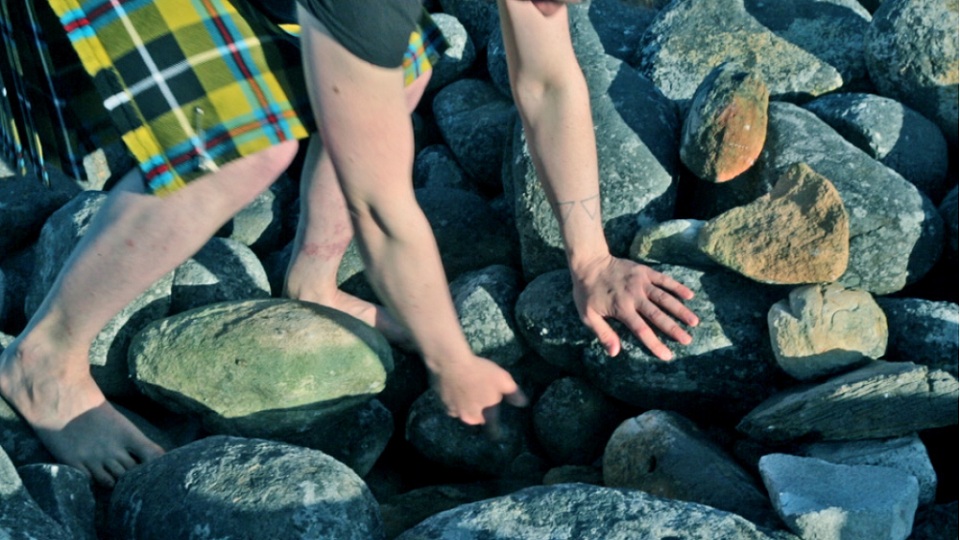 This month, Simon Pienaar, a third-generation Cornish South African writes about the effect that his Cornish ancestry has had on his art and his own sense of identity.

My name is Simon Pienaar (I also work under a family name, Tamblyn). I am an artist and a Cornish South African. Most of my work revolves around the ideals and ideas of home, family and land. But what has piqued my interest recently, is how these three aspects combine in constructing human identity. Through my work (see Figures 1 and 2), I continue to interrogate the definition of myself through the name and identity of a piece of territory that I have never visited. That territory is Cornwall. I have never been to Cornwall (I would love to visit) but it is not a place in my memory. What is in that Cornish soil – or really any soil – that allows me to define myself and my family with it?

Allow me to elaborate. Finding out about my Cornish great-grandfather – who came to South Africa at the turn of the twentieth century – was like finding a missing puzzle piece. Like so many other Cornish folk, he came to work on the mines. He worked in Beaconsfield and Warrenton in the Northern Cape and had his first child with my great-grandmother, at the age of forty-one. Their eldest daughter, my grandmother, then had her last child, my father, at thirty-nine. So, by the time I was born when my father was thirty-three, my cousins were already parents.

Being born into an “old” family wasn’t something I could describe properly when I was younger. But, in a strange way calling myself a Cornish South African has made the most sense to me in this context: there are only three generations between me and nineteenth century Penzance, something I still find utterly fascinating.

The little I now know about my great-grandfather’s life has illuminated what I know about my own identity, my family’s identity and how we fit into the world around us. It doesn’t matter so much that we know every little detail about where he was from (we are pretty certain it was Newlyn), it’s more about understanding the identity of diaspora. Through a series of triangulations, I can say I have a rough idea of where my culture is from on a map, and like so many other members of diasporas, it wasn’t from where I was born.

My birthplace was Johannesburg, South Africa. I was born in the early 1980’s – a tumultous time in the history of our young nation.1 However, my family didn’t stay in the city for long, we left before I turned a year old. By the age of five, we had moved to Cape Town, the city I’ve lived in since. I describe myself as a third-generation Cornish South African. Which is something I often get interrogated for – understandably so, excluding my family, I can count the other Cornish South Africans I know on one hand.

Through my visual arts studies in my late twenties and early thirties, I started investigating – thanks to the modern marvel that is the Internet! – exactly what it meant to be Cornish. While I would like to feel that more of my culture was ‘preserved’ (how I wished to have found a Cornish phrase scribbled in our family bible!) the reality is that much of it wasn’t. The best we have is my father’s memories of his mother’s pasties.

So, with memory being unreliable, I can describe my family’s current state of identity in abstract terms, as follows: a familiar absence that was once there. We can recognise what it once was by the impressions it has left on surrounding matter, like a lost rock’s cavity in clay. But, a large part of the actual object is no longer there, and we are attempting to fill it with what fits best.

I have tried to describe a part of this feeling in my art, working with the very rocks that make up the land. Attempting to describe the almost undefinable relationship between the real geography and human meaning. In my third year art exhibition, in a body of work called Fathers,2 I created a work called Combing the Cwm: a sculptural installation, a filmed performance and animation depicting the act of scouring and exploring a coastline, looking for something that perhaps cannot be found.

So, why is there a yearning for the knowledge of an origin point?3 Is it because the past is knowable, while the future remains permanently opaque? The truth is, our pasts inform our present and we can say that all identities are constantly created in the present. We are always carrying little pieces of history with us as we travel and move across the land.

Relating to the land in this way is not something that is preventable, or negative, but it is an aspect of humanity that is often taken for granted. It assists us in creating meaning and perhaps even purpose. My family and I have inherited the implications of a migration that took place more than a hundred years ago. Remarkably, it still occupies a space in my identity and “…within the sphere of identity, there is a constant dialogue at work between movement and fixity, between dynamism and stasis” (Jansen 1998:107). This idealistic echo of a place in the mind of the diaspora is at the core of the concept of diaspora, its the image of a remembered home that stands at a distance both temporally and spatially creating an ‘ideology of return’” (Stock 2010:24). I am not only separated from Cornwall by geographic distance, but also by time. I remain a removed part of it, and one day, hope to find out exactly what is so special about Cornish soil.

Find out more about Simon and his art by visiting his website here.

Simon Pienaar
Simon Pienaar was born in 1983 in Johannesburg, shortly after his family relocated to the Western Cape. He has lived in Cape Town since.

Simon is a third-year UNISA (University of South Africa) Visual Arts student, expecting to graduate at the end of 2018. Pienaar works as a graphic designer in the education sector and lives in Plumstead, Cape Town with his partner and their German shepherd.