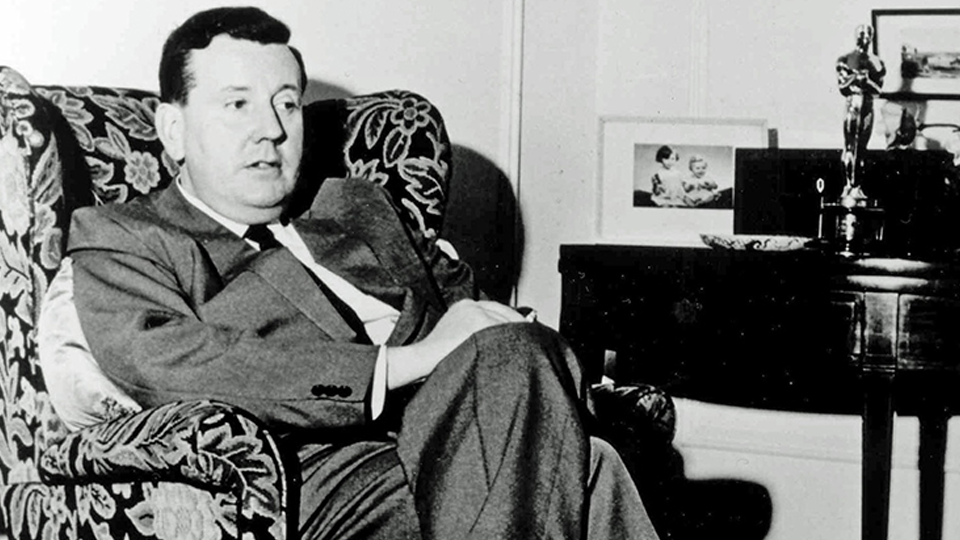 In the sixth article in the Music Kernow series, Phillip Hunt recounts the life and successes of an inspirational musician who had an enduring influence on all who played under him.

“Happy but not idyllic – there’s nothing idyllic about writing music and bringing up a family”. That was how Malcolm Arnold described the years between 1965 and 1972 when, with his second wife Isobel, he lived at St Merryn in Cornwall. Eager to escape the pressures of living in London they moved just after their marriage to Primrose Cottage – actually a row of three-hundred year old fisherman’s cottages converted into one – in the small village just outside Padstow. It was in Cornwall during that period that he had his closest and most enthusiastic contact with the Brass Band World.

Malcolm Arnold had spent several holidays in Cornwall, indeed during his student days at The Royal College of Music he lived for a short spell in Plymouth, just over the border in Devon. Following a row with Sir George Dyson, the Principal of the College, Arnold in his own words, “ran away with a very beautiful Welsh art student with red hair from The Royal College of Art. We went to Plymouth, where I decided never to do music again, and just live the life of an artisan. But music got the upper hand and I got a job as a trumpeter in a dance band in Union Street, where I was very happy until I was found by private detectives”.

It was during the years in Cornwall that Malcolm Arnold wrote some of his most popular and successful orchestral and film music including his ‘6th Symphony,’ ‘Peterloo Overture,’ ‘Four Cornish Dances’ and ‘Fantasies for Trumpet, Trombone and Tuba’. The self-doubt that led to periods of mental frustration and illness had not really surfaced during those years when he was still, at least outwardly, an ebullient and gregarious character.

With his new wife and infant son Edward, who was born in Cornwall, he threw himself enthusiastically into the musical life of the County, in particular Brass Bands and specifically the Cornwall Youth Brass Band. The 1966 Annual Course of the Band took place at Fowey with Geoffrey Brand as Course Director. One of the pieces chosen for the course was Arnold’s ‘Little Suite for Brass,’ which he had written for the National Youth Brass Band of Scotland in 1963. In a foreword to the concert programme he wrote “I have known some of the Brass Bands and Choirs in Cornwall for many years, but it was not until I came to live here that I became aware of what a living tradition of music there is in this part of the world. I am certain that such an organisation as a youth brass band not only does so much good for talented young musicians, but its influence will be far larger in a social sense, than only a musical one”.

So impressed was Malcolm Arnold by the Cornwall Youth Brass Band, led on that course by Brian Minear, that he offered to write a work for them for their next course. Naturally, the offer was gratefully accepted and on January 19th 1967 the score and parts of ‘The Little Suite No 2 for Brass Band’ were received by Reg Trudgian, the Chairman of the Band. On the original handwritten score, Malcolm Arnold wrote “All players should play in all parts (even in pianissimo passages) unless otherwise indicated”. The new work was premiered at Fowey on Easter Sunday that year at the end of Course Concert with the Composer himself conducting the work, with its three movements, Round, Cavatina and Galop.

The Suite was received with great acclaim prompting the composer to write to Reg Trudgian a few days later that “The Concert was a great experience which I shall never forget. Every player excelled themselves and made me realise what a wonderful thing music is”. The ‘Little Suite’ was repeated the following year when Malcolm Arnold, to the delight of the Committee and Band, directed the whole course himself, an occasion fondly remembered by one of the baritone players Terry Sleeman who said that he was “someone you looked up to, he was jovial, but always serious about the music”.

His interesting choice of music for the Course included, ‘Tintagel’ by Denis Wright, who had died earlier that year and ‘Music for a Brass Band’ by Martin Dalby as well as lighter numbers such as ‘Sandpaper Ballet’ and ‘Stardust’. Malcolm Arnold refused any fee or expenses for his services and was quoted in The Cornish Guardian as saying ”These seventy young people have given me more than I have given them”. There was such a demand for tickets for the Saturday end-of-course concert that an extra performance was laid on the following day.

Though born in Northampton, Malcolm Arnold found himself in great sympathy with the Celtic spirit of Cornwall, which he memorably described in a programme note for the first performance of his ‘Four Cornish Dances’ as “a land of male voice choirs, brass bands, Methodism, May Days and Moodey and Sankey hymns”. In The Western Morning News on October 17th 1969 he is quoted as saying, “I am now aggressively, chauvinistically Cornish” and he felt immensely proud and flattered by his adopted county when he was initiated as a Bard of The Cornish Gorsedh at Liskeard that year with the Cornish Bardic name of Trompour, translating as Trumpeter in English. The choice of name reflected his early career as a trumpet player, particularly in the London Philharmonic Orchestra, which he had joined as a teenager and became principal trumpet of at the age of twenty-one, before giving it up to dedicate himself entirely to composition some four years later.

Such was his interest and involvement with the Cornish musical scene that after coming across the music of Thomas Merritt he enthusiastically promoted it to the extent of personally organising and conducting a concert of his works in Truro Cathedral. Thomas Merritt, scarcely a familiar name in British music, though well known in Cornwall, was born into a poor mining family in 1863 in the parish of Illogan, near Redruth. A miner himself from an early age he was a self-taught musician and became a prolific composer and conductor before dying in 1908 at the age of forty-six.

For the concert, which took place on 16th March 1968 to mark the 60th anniversary of Merritt’s death, Arnold assembled the combined forces of the St Dennis and St Agnes Bands as well as the Cornwall Symphony Orchestra and several choirs. The programme included Merritt’s ‘Coronation March’ and several of his hymns, carols and anthems all arranged by Malcolm Arnold himself for the combined forces. In addition he went to the trouble of composing a work himself called ‘Salute to Thomas Merritt,’ which is listed as his Opus 98. The five minute piece, scored for two bands and orchestra, is in essence an extended fanfare and the various ensembles were dispersed around the Cathedral.

This almost led to a break down in the music when the St Agnes Band were making their way up a narrow stone spiral staircase to a gallery high above the nave to play their part. Eric Lobb, one of their bass players, managed to wedge the bell of his instrument firmly between the stones halfway up. With most of the band behind him it took some time before he could be freed, in the end by brute force, just in time for the band to take their places and come in on cue.

There is no doubt that Malcolm Arnold’s concert march the ‘Padstow Lifeboat’ must be one of the most popular brass band pieces ever written. It has gone around the world taking the name of the small Cornish town with it and has been transcribed into wind band and orchestral versions. It is in fact a very personal work, written by Arnold in 1967 specifically for the launching of a new lifeboat in Padstow by the Duke of Kent.

In an interview he gave on Padstow Quay, which was broadcast on Radio Three, the composer said, “The lifeboat here is very much part of everybody’s life. They do some tremendously heroic rescues, I know the crew, I know the Coxswain – Coxswain Elliot, most of them are friends of mine and I was struck by their heroism and it being very much part of the town I thought I would like to write a march, that’s all”.

On the day of the launch the first performance was given by the St Dennis Silver Band, whose Musical Director, Eddie Williams, handed over the baton to the composer to conduct. Following the formalities he took the whole band into the nearest pub and treated them to several rounds of drinks, ensuring that the march was well and truly launched in a way the band members have never forgotten. Nor have they forgotten the day he came to adjudicate their Solo and Quartet Contest. St Dennis not being the easiest place to find in the Cornish lanes, he became completely lost and ended up driving down a narrow public footpath where his car became jammed against a stile.

Since his youth, Malcolm Arnold had always been a restless figure and by the early seventies felt the desire to move on. His time in Cornwall had been productive musically but on the personal front had been marred by the discovery that his son, Edward, was autistic, a condition about which little was known at that time. To widespread regret from the brass band musicians of Cornwall he moved in 1972 to Ireland, settling just outside Dublin.

Despite the fact that his orchestral music has not always been widely accepted by the musical establishment, Malcolm Arnold has always been a popular figure in the brass band movement with both players and listeners alike. With many arrangements of his orchestral works available for bands as well as his original brass band compositions he figures regularly in concert programmes and at Contests. Living quietly in retirement in Norfolk he continued to take a keen interest in the Brass Band movement until his death on 23rd September 2006 at the age of 84.

Music Kernow will continue in next month’s issue when Tony Mansell turns the attention to Phillip Hunt, who is himself a key contributor to the Music Kernow series and the author of this very article. Find out more about Phillip in his biography entry below.

Philip Hunt
Phillip Hunt has had a lifetime interest in Cornish music, particularly brass bands, playing in them, writing about them, and broadcasting his weekly Sounds of Brass programme on BBC Radio for over 30 years. He is a Bard of the Cornish Gorsedh, with the Bardic name, Lef A Vrest, Voice of Brass.