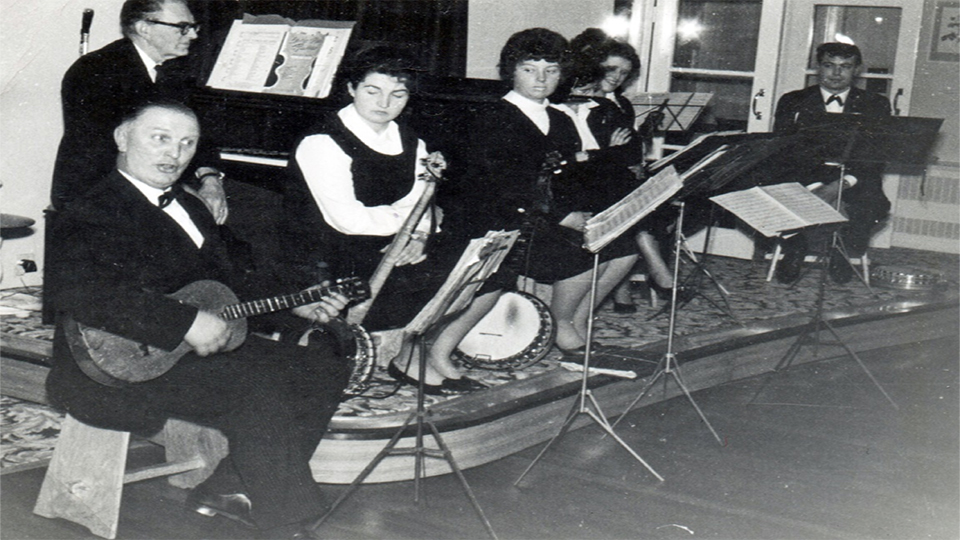 Our series on Cornish Music is back, join Tony Mansell as he shares his memory of a group of musicians and entertainers that thrilled their audiences with their home-grown talent.

Halls warmed only by the folk who had braved the wind and rain, curtains faded by time, paint peeling off walls but it mattered not, the entertainers were on stage and tonight it was the famous ‘Goonhavern Banjo Band’. They had travelled far and the audience who waited in excited anticipation would not be disappointed.

The question that immediately springs to mind is, ‘Why the banjo?’ In most Cornish communities the brass band was the automatic choice but at Goonhavern (situated between Perranporth on the North coast and the A30) that was not the case: here, it was the banjo. The answer quickly becomes apparent when you consider one man’s enthusiasm for the instrument. His passion, fostered many thousands of miles away, in the USA, led to a life-long interest and to the formation of the Goonhavern Banjo Band. That man was Fred Eplett.

In the coming years the Goonhavern Banjo Band would attract many players to its ranks and fill countless halls with people eager to hear its distinctive brand of music and humour. The Band was based in the little village of Goonhavern but its reputation was Cornwall wide.

Former player, Marina Golley recalled, “There were about 30 members in the 1950s. We practised in Fred Eplett’s bungalow in Goonhavern and travelled to engagements on a Newquay Motor Company coach.”

So, when did it all start: when was the Goonhavern Banjo Band formed? It has been suggested that the first strings were plucked as long ago as 1920, just after the First World War but this possibly relates to Fred’s brother’s interest in the instrument rather than anything as formal as an organised band. Indeed, Derek Brooks of Goonhavern said that Fred Eplett formed the Band in the mid-1930s following his return to this country and this is given credence by an article in the Goonhavern Gazette which states that Fred Eplett was greatly helped in setting it up by a Mr and Mrs Baden Powell of Newquay and by Frank Bogden, a professional musician, who was its first musical director.

Another view proffered is that the Band was formed immediately after the Second World War and whilst this is undoubtedly incorrect we can readily forgive the error as its activities were suspended during the years of conflict and it was necessary to virtually start all over again. A more appropriate statement would be that it was re-formed then. 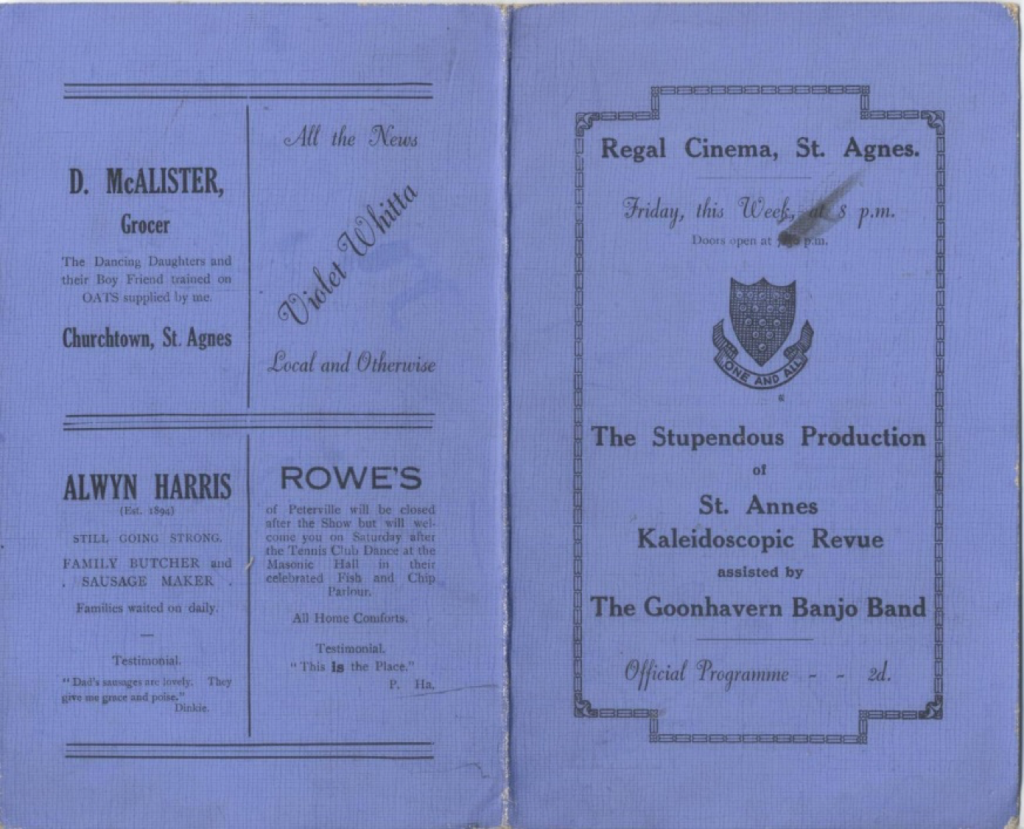 Although the banjo featured in the name of the Band, there were many other instruments which contributed to the unique sound. Furthermore, if we consider that the performances included music, comedy, magic acts, Cornish readings and even a spot of juggling it soon becomes clear that an evening with the Goonhavern Banjo Band was an entire variety show. The banjo was the chief instrument and in the next article in this series John Roberts will provide us with an insight to its history and techniques.

Bookings came from far afield and when the coach arrived the large troop set off to locations from Stenalees to St Buryan and from Veryan to the Lizard. A concert at Ruan Minor meant a rather lengthy journey and for most of the members it was into unknown territory. The clock was ticking as the coach made its way along the country roads and the pressure increased as they became aware that they had no idea where they were. They decided to ask the way and former player Marina Golley said that when they came across a large building with lots of lights Fred Eplett jumped out to investigate. He could be seen peering in the windows, checking to see if they had actually found the hall. Unfortunately, when he returned to the coach, he had to tell them that it wasn’t the venue, it was a shed and the only audience was about 300 chickens staring back at him.

The Band’s repertoire was as varied as the instrumentation. Many of the items were typical banjo pieces but some weren’t and these needed some clever transposing to suit the Band’s composition. It seems that one piece began with a drum Roll and the audience stood as they thought it was the National Anthem. It wasn’t, so they all sat down again. The music was of a different age and some of the titles would not pass the politically correct rules that we live by today but back then they seemed innocent enough and no one appeared to take offence.

As mentioned previously, the first musical director was Frank G Brogden. This is confirmed by a brief history in the 1967 edition of the Goonhavern Gazette which goes on to say that he was followed by Miss Rosa Loader, Mr Frank Cuss and Mr L Taylor. However, it then implies that Mr Moyle took over in 1955, a statement which Marina Golley refutes as she says, “Mr Moyle was certainly in post when I joined in 1950”. Considering this, we feel sure that he was the musical director from circa 1950 until the late 1960s.

W (Billy) E Moyle was a brass bandsman. He was born in Camborne in early 1904 and began his musical career with the famous Camborne Brass Band. In 1922 he moved to Newquay to work and joined Newquay Town Band as solo cornet. Shortly after he moved to Canada where he played trumpet and piano in a travelling circus – possibly Barnum and Bailey. Illness forced his return to this country and in the late 1920s he attended the London Guildhall School of Music where he gained his LGSM qualification. He then moved back to Newquay where he played piano for the silent films at the Old Pavilion Cinema and led a dance band which won the Championship of Cornwall in the 1930s.

The activities of Goonhavern Banjo Band were suspended during the war and it seems probable that the man who resurrected it was Fred Eplett, the original founder. Whether it was Mr Taylor or Mr Moyle who then wielded the baton we cannot be sure but Mr Taylor’s inclusion in the 1950s photos surely points to his continued involvement despite Mr Moyle having taken over by then.

Clearly, Billy Moyle was a major factor in the Band’s success. He was never satisfied with anything less than a good performance always reminding the players that the public did not want to pay for a ‘yard of pump water’.

Terry Knight of St Agnes, formerly of Troon, Mr Moyle’s nephew, recalled that it was always a big occasion when the Band came to their village. He said, “I suspect that they might have come to Troon more than some other places because of my uncle’s family connections. The concerts were held in St John’s Wesleyan Methodist Chapel, in the Sunday School Room. It would have been in the mid-1950s, before television had really taken a grip, when a good quality light entertainment event would fill the hall. Village concerts with locals performing at the chapel were a frequent occurrence and always well-supported but the Goonhavern Banjo Band was that bit special: these people had travelled! I guess that it was an exciting time for a young professional musician and Billy Moyle probably took to some of the American music trends. I’ve always imagined that his interest in the banjo and dance bands might have been encouraged there but I’m not aware that he ever played the instrument, certainly not well enough to teach it.”

We began with a description of a location where the band was always welcome. It could have been anywhere but it was the little Cornish village of Silverwell, a scattered community in the parish of St Agnes where few people lived within easy walking distance of the venue. The curtains concealed the stage but it was almost time to start and as the drapes swept back there were the ladies in their black pleated skirts, white long-sleeved blouses, black waistcoats and white sashes with GBB (Goonhavern Banjo Band) embroidered in red. The men, too, looked the part in their black suits with a satin stripe down each trouser leg.

During its existence, many players played in the Band, too many to list in this short article. There are two, however, whose appearances were always eagerly awaited and this story would not be complete if they are not given a special mention. Glen Pedlar was a guitarist, a hillbilly singer, folk singer and comedian. Many people looked forward to his slot on the programme and he always received a huge round of applause. He joined in the early years and was still appearing as a soloist in the late stages of the Band’s life. The other played lead banjo and invariably performed a solo at the many concerts. Rita Jacka, Fred Eplett’s cousin, was the Band’s brightest star. She achieved considerable success at the All-England Championships in London and her name was synonymous with that of Goonhavern Banjo Band. Listen to her play ‘Ain’t She Sweet’ by clicking play below.

Returning to the 1960s concert at Silverwell Chapel it is clear that the good folk have enjoyed their evening and now, as the last strains of music fade away, the concert draws to a close and there is the reassuring sound of a singing kettle. It’s time to put away the instruments and enjoy the typical Cornish spread which the ladies have prepared. Soon, the players will be clambering back onto the Newquay Motor Company Coach and making their way back to Goonhavern having notched up yet another concert.

The 1960s marked the end of an era. Local talent had once filled village halls but now, radio and television brought the superstars into our living rooms. Brass bands and choirs were faced with dwindling audiences and although the Goonhavern Banjo Band was still popular, it was increasingly viewed as of a different age. Sadly, the Band closed in 1972. Looking back there is no single reason why but by then Fred Eplett had died, there was no drummer and with players leaving for various reasons the enthusiasm simply drained away.

So ended the Goonhavern Banjo Band; it had delighted audiences for over a generation, achieved a near-cult following and forged a reputation which persists to this day.