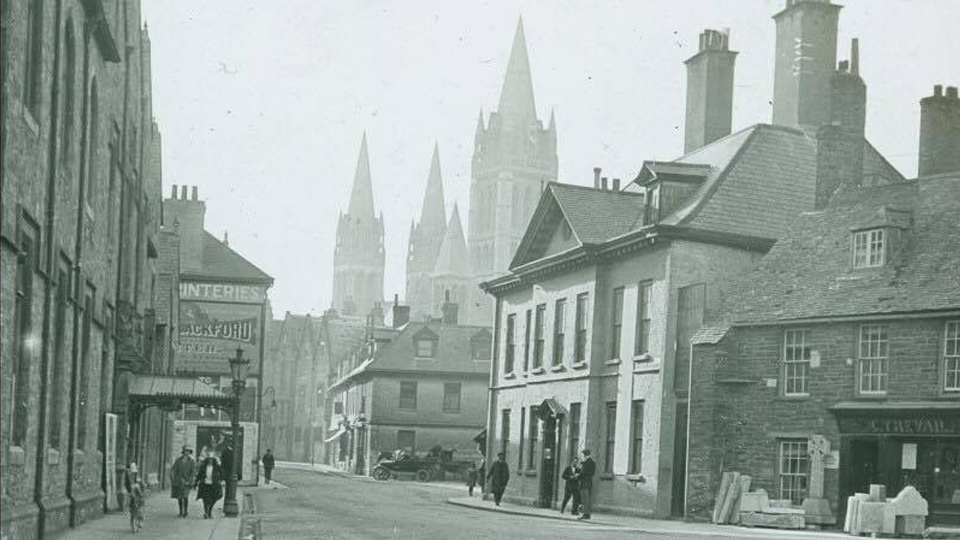 Paul Caruana discusses the benefits of Social Media in raising awareness of local nostalgia and heritage.

Can Social Media really have an effect on the way we both learn and teach our local history? Is It the correct medium to utilise if we wish to maximise exposure and reach out to the masses? Is there enough interest out there to justify the work involved undertaking such tasks? The answers are yes, yes and yes!

The Facebook group ‘Nostalgic Truro – Old shops’, was created in 2013 out of the interest shown by many Truronians who wish to see local nostalgia reintroduced to the community. From humble beginnings, interest grew and grew until almost five thousand members were enrolled. Soon after it reached its peak, something happened that is the blight of many Facebook groups – an Admin fall out.  this resulted in another group being formed to undertake the task and role, simply called  ‘Nostalgic Truro‘ whose aim was to reintroduce peace and harmony within those interested group members who wished to use the site, but not be tied up in group politics. I am glad to report that this is the case and more than 1700 members use the site regularly to stay in touch with Truro’s recent and distant past.

The site has an archive of over eight thousand photographs, all supplied by its members, with some photographs dating back to 1880. Many of its members use the site as their window to the world as they are housebound, live in distant places or simply do not have the opportunity to socialise openly. The real benefit of this was that literally thousands of images were posted onto the site displaying both the lives of everyday Truronians over the past one hundred years and the more recent changes that affect the lives of those who currently reside in the city. A wealth of information and interest has been generated and exchanged, something that may never have occurred had it not been for social media usage. The one huge benefit of asking members to post all of the images was the fact that they actually had them. In today’s digital age, many, indeed most of those taken are simply deleted, erasing what could potentially be a future historical record of events as they occurred. As a photographer myself, this is a problem of which I am all too aware.

In February 2014, a challenge was set with the intention of promoting Truro’s history and heritage in the form of a Truro open day. In September 2014, following much hard work by all involved, we saw the introduction of what is locally known as ‘Truro Day’. It is an event that is put together by local volunteers, for local people who are entertained by local musicians and acts. It was to be a day for Truro, by Truro for the enjoyment of residents of Truro. Furthermore, more than fifty local groups and societies decided to use the event to publicise their own opportunities and skills to the local population. All in all, it turned out to be a very successful day with over 5000 people attending. The centrepiece of the event was a display of five hundred photos of old Truro which was packed all day. The interest in local nostalgia was alive and kicking. The real question was whether or not it could be sustained on a long term basis. The answer is a resounding yes. The City Council saw the benefit of getting communities back together and asked for the event to become an annual one, which it now is.

We had proven that nostalgia wasn’t dead and buried and that all it needed was reigniting. The task then was how to get it out it to the wider population, especially the younger generation. The big question now is whether or not it can be sustained on a long term basis.

Introducing nostalgia to primary schools has to be the way forward in the form of ‘now and then’ type presentations. Many children will recognise the current landmarks around our city, however, how many are aware of the landmarks that have disappeared within the last fifty years? How many would recognise those landmarks in photographs or film? Very few I would guess. Introducing slide shows of days gone by will stimulate interest, engender a sense of belonging and encourage our children to embrace our history and heritage. It will help them to understand and appreciate that their city has existed for many more years than they could possibly be aware of and that there are images to prove it.

Social media has been an excellent tool in assisting the fundraising necessary to support days such as Truro Day. The one point that sticks out, is that there are hundreds, maybe thousands of people in our community who wish to be involved in retaining and promoting our nostalgia, but would prefer not to be directly involved. They may lack the confidence or skills to be actively involved, but are more than happy to assist by volunteering their labour or making donations to what they see as a good cause. The support that we have received as a social media initiated group has been immense. Engagement within the community would have been much more difficult had social media not been available to facilitate it. It is important to remember that every Facebook group member has a large network of friends and family that see shared content and posts pertinent to ‘Nostalgic Truro’. In the pre-social media age, the local press would if you were lucky, publish a post on your behalf. A form of engagement, but a limited one without the reach of modern social media platforms. The huge benefit of having a successful social media site is that its members are able to pose questions to a wide audience in their quest for up to date information.

Can social media be used as a tool to help look after our heritage as well? It certainly can. A local site known as ‘Sunny Corner’ hosts one of Truro’s most recognisable landmarks – the old bathing hut which is at least 105 years old. A recent visit found it in a rather dilapidated state of repair. Enquiries as to who actually owned it resulted in a meeting with the local Harbour Authority, who in short wished to have the building knocked down, rather than maintain responsibility for its upkeep. Agreement was reached on the immediate future of the bathing hut – a friends group was formed to maintain and refurbish it before taking ownership. This was true localism at work. Local people accepting responsibility for looking after their own heritage site. Within four weeks, the group was formed, working parties instigated and funds raised. In total, more than £4000 was raised to complete the renovation. All within four weeks. The power of social media proving its worth once again.

Paul Caruana
Described by the West Briton as "Truro's very own Mr Nice guy, who was the driving force and lynchpin behind the popular Truro Day", Paul Caruana was born and bred in Truro where he still lives today. Following a period of service with the RAF, Paul returned to his beloved city, where he has been involved in community projects ever since. He was presented with a certificate at the Cornwall Council Civic Awards in recognition of his service to the city of Truro.