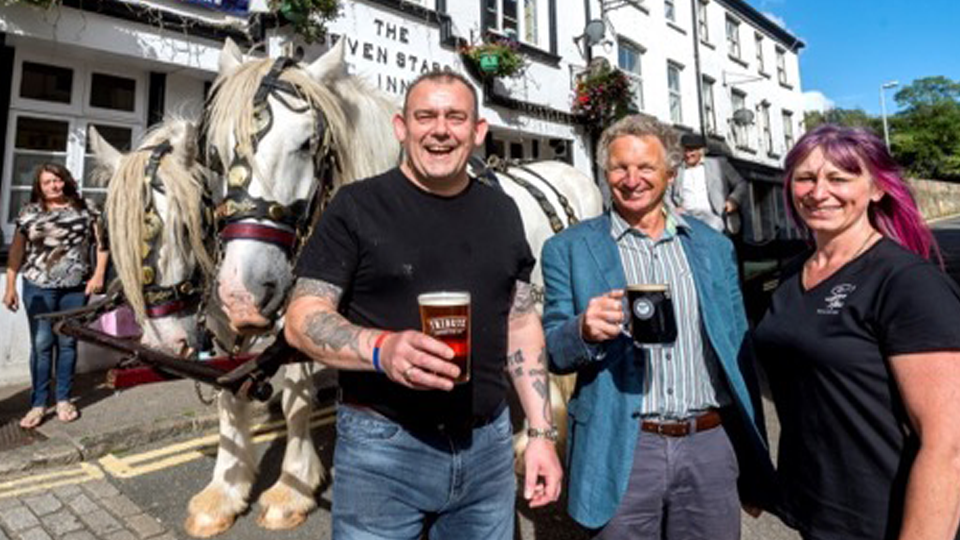 Continuing the series covering the history of Cornish hostelries and ale houses, Isabel Robinson takes us on journey to explore the roots of St Austell Brewery.

‘St Austell Brewery’ has become a symbol of the Cornish hospitality industry which today spans the length of the county and beyond. But where did it all start? The answer to that question lies on a quiet lane just off St Austell town centre at St Austell Brewery’s foundation stone pub the Seven Stars Inn.

Founder of the Brewery Walter Hicks seems to have been a natural entrepreneur. His first venture was as a Maltster in 1851 a business which he later developed before opening a wine and spirits shop which was so successful it drove local competitors out of business, including one belonging to Walter’s own cousin. It is likely that his sights were set much higher very early on, and in 1863 he took the first step towards his goal of creating a network of ale houses and hostelries by purchasing the lease of the Seven Stars.  For this he paid £550, (equivalent to approximately £24,000 today), the purchase only being made possible thanks to £300 left to his wife Emma in her late Aunt’s will.

The Seven Stars did house a small ‘Brewhouse’ which was the norm for pubs in those days so they could produce in house beverages for indigenous imbibers. Within a year Walter had already extended his ambition to acquire the nearby ‘Old London Inn Coaching House’ as the site for his first commercial brewery, (now ‘Tregonissey House’) and after a complicated process he finally managed to purchase the building in 1870.

The 1800s saw a surge in numbers of pubs and brewers and the introduction of the ‘Beerhouse’ and beer shops as a result of the ‘Beerhouse act’ of 1830, which probably played a part in Walter’s success. The Beerhouse act was introduced by the Duke of Wellington’s government as a way of discouraging the excessive gin consumption that had gripped the working classes. Where beer had been taxed making it less affordable, gin was not so affected and hence became the cheap and readily available drink of choice. As a result, the Temperance movement began to campaign for the closure of the ‘gin shops’ and the government’s response was to abolish the beer tax and relax licensing laws. As a further result a Beerhouse special licence was offered to premises selling only beer. Such licences were easy to afford and easy to acquire, and thus the St Austell Brewery came into existence due in some large part to the Beerhouse Act.

While the ‘heyday’ of the British pub is often disputed, and cannot really be defined, the late 1800s is certainly a contender – despite the growing Temperance movement. This period was also one of great changes for St Austell. Throughout the 19th Century the town and surrounding areas had developed to accommodate the thriving China Clay industry and the town centre prospered as a result. One such development was the ‘Charlestown Harbour’, two miles away from St Austell town centre, where much of this clay was exported. Walter’s first little pub was perfectly located at the bottom of ‘East Hill’ on the main route out of town towards the harbour, and was the perfect place to stop while more horses were being added onto heavy wagons of clay.  So, The Seven Stars and Walter’s business were born into a busy, exciting, prospering St Austell – the perfect base for a growing empire. In the days before cars, busses and trains, pub owners were not faced with the common problem of over saturation that we so often see now. St Austell, though it still has its fair share of trade, once had a pub on every street corner.

In general Pubs needed to be within easy walking distance of home and work, therefore demand was high for places to gather for food and drink. The Stars, like other pubs, formed an important and central part of the community; it was a place to catch up with friends and family, find a tradesman or do business. Over time increased mobility and distances between home and workplace has meant that pubs no longer serve this purpose, and the idea of the ‘local’ has declined, particularly in larger towns.

Transport forms an important part of the story of the Stars and of the brewery. It is a poignant paradox that the transport links that saw the decline of St Austell town and the Charlestown harbour are the same links Walter exploited to expand his business down the length of Cornwall through the train lines. The new pubs he snapped up were cleverly dotted along these transport routes, allowing the business easy growth.

The Seven Stars was renowned for breaking licensing laws and earned names such as ‘the pub that never shut’, ‘the backdoor pub’ and ‘the ‘postie’s pub’, as postmen would come in through the back door to drink at the crack of dawn when pubs were supposed to be closed. I was told a morbid story about an unlucky gentleman who sadly passed away whilst sat having a drink early one morning. Of course, had the authorities been notified at the time the Stars would have been caught serving outside licensing hours, so the man was propped up by the fire and covered in blankets to keep the body warm until the death could safely be reported. Though a sad story, I found this an amusing nod to the way things used to be and the story has become part of this little pub’s history.

Businesses, including pubs, come and go; yet the Seven Stars has weathered the test of time and will no doubt continue to flourish as it has done over the past hundred and fifty years, always there to offer a warm welcome and a nice cold pint.

You can find the fourth in the series on the public houses and taverns of St Agnes here.

Isabel Robinson
Isabel is a 21-year-old History student from the Cotswolds who is about to enter her third year of study with the University of Exeter at their Cornwall campus in Penryn. Isabel informs “I have loved being able to explore some local history, and would like to say a huge thank you to Chris Knight, the PR Manager and Archivist at ‘St Austell Brewery’ and Sara Gibson the current Landlady at the ‘Seven Stars’ for their help with the research for this article.”