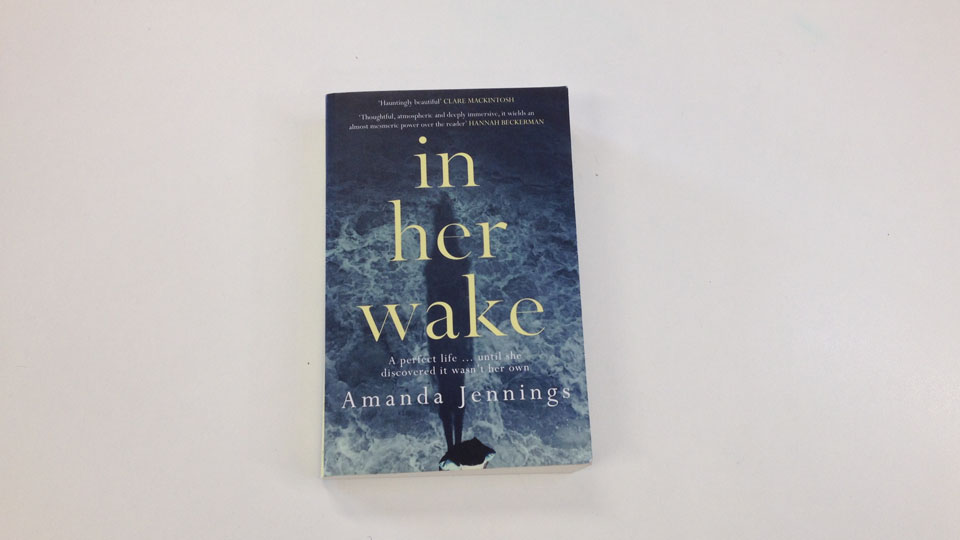 In Her Wake is the third novel from author Amanda Jennings. Join Cornish Story’s editor Emily Ould as she gives a review of the author’s new novel which is set in Cornwall.

In Her Wake not only tells the story of a woman trying to reconnect with a family she never knew, but also takes place in a stunning location like no other: Cornwall. As hauntingly devastating as it is mesmerising, this novel is one to watch and has already been listed in the top five books to read in Heat magazine.

The tagline reads ‘What if you discover the life you’ve been living isn’t your own?’. This alone seems to be enough to draw readers in but the author’s vivid description and haunting turn of events will have you finishing it in no time. What story about Cornwall would be complete without sweeping cliffs, mysterious secrets and a bed of rolling sea on the coast to stir the senses of a reader? This book is no exception.

The author, Amanda Jennings, lives in London while working alongside writing and looking after her three children. She has previously worked for the BBC and is currently a judge for the Henley Youth Festival writing competition. As well as this, she is also a regular guest presenter on BBC Berkshire’s weekly Book Club.

The novel has received a lot of praise all over social media leading up to the book’s release and after. It seems that Cornish readers in particular can find something within this book to make them smile and feel at home, whilst still being in the grips of a good story.

Most of the scenes that take place throughout the novel are set in St. Ives where, at one point, a party on its long, sandy beach is described at night time from the main character Bella’s point of view. Amanda Jennings effortlessly draws a picture of Cornwall in the reader’s head with her languid style of writing, description and, of course, snippets of Cornish language which is practiced by a few local characters, which was a real pleasure to read.

The little hamlet of Zennor also makes frequent appearances in this book and the tale of the mermaid chair is a prevalent theme throughout, while protagonist Bella struggles to put all the pieces of her past together along the way.

This novel is one which any reader of psychological thrillers will most likely enjoy. The author’s detailed telling of a journey which Bella must face alone is one which encompasses the themes of family secrets, personal and regional identity and the struggle to get a true grasp of who you really are, on the outside as well as on the inside.

Copies of the book are available online and throughout bookshops nationwide.

You can also view the author’s website here. She is currently writing her fourth novel, another psychological thriller, which is set in West Cornwall.

Emily Ould
Emily is a student graduating from Falmouth University this year. She is also the Editor for Cornish Story. In her spare time, she enjoys reading, writing, exploring new places and playing the mandolin.