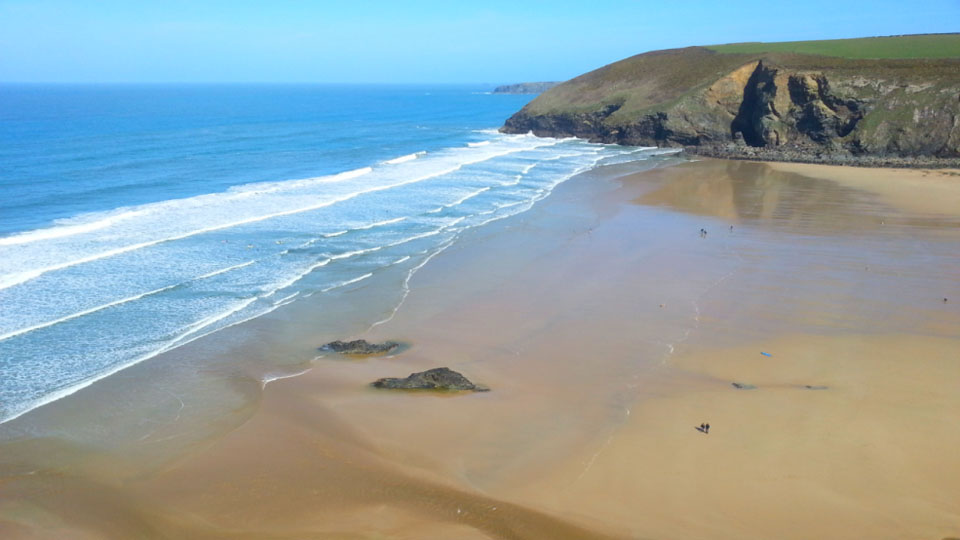 Taken from Elizabeth Dale’s blog, the Cornish Bird Blog, readers are invited to join her in her travels along Mawgan Porth where she delves into the history of mermaids. You can read Elizabeth’s blog here.

I took the opportunity of spending beautiful Good Friday walking along the cliffs at Mawgan Porth.  This stunning stretch of the north Cornwall coast has high cliffs which tower above flat golden beaches and on a sunny day it is a lovely place to be.  But my walk was all in the name of research, of course.

In the summer of 1827 on 3 consecutive days in June there were sightings of something odd in the waters off Mawgan Porth in Cornwall.  The first occurred late in the evening.  A rather nervous young man, who had arranged to meet a friend, came down on to the wide flat beach.  The boys had intended to do some night fishing and were looking for that great favourite of the Cornish dinner table: the pilchard.

On arriving at the beach the boy was unable to see his friend but he heard some rather strange noises coming from a large cave which at low tide is filled with deep pools.  Thinking that perhaps his friend was playing tricks he went to investigate.  What he saw sent him running back up the beach screaming blue murder and telling anyone that would listen that the devil had arrived in the south west.

The boy told the papers that he wasn’t really sure what he had seen, just that it had appeared “part human” and had “long hair hanging about it’s body”.  The next day a group of three men were standing on the cliffs at Bre Pen above the same beach.  They were perhaps on the look out for those flashing shadows in the water which meant there was a shoal of pilchards to be caught.

But it wasn’t fish that they saw, there was something rather odd on the rocks below.  Later they recalled to the reporter from the West Briton that there were 3 of them, sitting together on a rock, just off shore.  Mermaids. 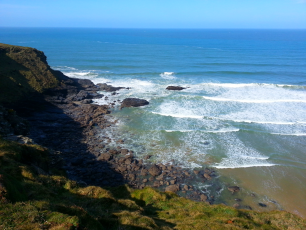 On the third day five more were spotted and the men who saw them this time said that they watched them for more than an hour. The West Briton reported the sightings in 2 separate issues of the newspaper and provided a vivid description for their readers.  The mermaids were said to have had very long hair, perhaps 9 or 10 feet long, which was trailing across the rock on which they had been seen sitting.  Some of them lay in the sun as if asleep, others were swimming in the sea close by.  They all had the upper body of a human, with pale skin, and their lower half was finished with a fin like a fish and was bluish in colour.

So what did they see over those long summer days nearly 200 years ago?  Mermaid sightings are not confided to the rural Cornwall, the legend of half humans, half fish creatures appear in mythology all over the world from Asia to Africa and beyond.  Mermaids are one of those universal human mystery stories like vampires and sea monsters and these myths date back at least 2000 years to the legend of Era, the Babylonian god.  We are all also familiar with Triton, not that I am suggesting that that is what the men of Mawgan Porth saw.

What I do find odd is that the excepted explanation for mermaid sightings is that people have foolishly mistaken a seal or some other water creature for something more extraordinary.  Somehow that doesn’t sit well in this case, the men were in a group, they were, if not fishermen, people who lived by the sea and should have been familiar with its wildlife.  Add this to the fact that the sightings happened over 3 days and they claim to have watched the ‘mermaids’ for prolonged periods and it all seems a bit fishy!

Folklore concerning mermaids has evolved over the centuries.  Not all the stories were of beautiful maidens wearing oyster-shells bras and combing their long blonde hair with a friendly sea urchin as this 19th century drawing perfectly illustrates. The tale of the Sirens who’s song lured men and ships to their doom is frighteningly dark and plays on our fear of the wild unknown ocean.

Strangely the stories of Merfolk still persist to this day, just Google mermaid sightings and see what pops up!

Sadly my walk didn’t bear fruit, there was nothing to see, no mermaids, just the odd surfer.  Maybe next time.

Liked this article? You can see similar writings on Elizabeth’s blog by clicking here.

Elizabeth Dale
Elizabeth is Cornish born and bred with a passion for all things quirky, as well as anything interesting and historical about the beautiful Cornish county.