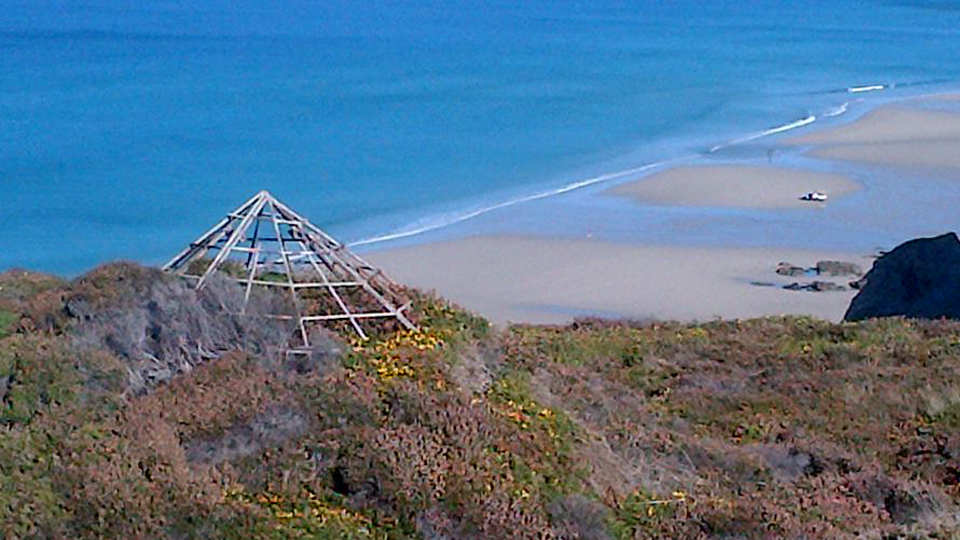 In this regular series of features she will be mapping these kinds of stories onto the physical landscape of the Cornish coast.

On the last Sunday of September we arrived at Chapel Porth. It was so early that the surfers hadn’t even emerged from their camper vans. The Indian summer continued and we climbed towards the ruined mine stacks as a lonely life guard marked out the empty beach. Sunshine gorse still sang summer but purple heather faded into autumnal browns.

High on the cliff top a path of shale and gravel led through a barren lunar landscape. Scattered piles of rocks commemorated the bal maidens who, for generations, toiled on the surface of Wheals Charlotte and Sally. A rusty conical wire frame caged one small heap of stones.

The swathe of smooth sand below stretched out to gentle blue. Crane flies with translucent wings danced among spiralling gwibesen. Cows grazed on the horizon and our path dug deep through glorious weather down to Porthtowan where surf music echoed from the bar.

Fenced off areas of marram grass were transplanted from nearby dunes to trap windblown sand.  Its deep roots kept the sand in place to rebuild dunes destroyed in recent floods. Beach grass can tolerate salt and drought, not boots or paws.

Up on the cliff a shrine of flowers, an urn, a Disneyesque model of a castle, and stones remembered, “A rainbow warrior riding through the crystal surf.”

On the beach, remnants of stone circles celebrated holidays.

The path, now grassy, climbed through purple flowers but passed a dead gull, black and white. Rising above the crows, falling star iris was browning, bog cotton was crisping but blackberries still offered their bloody sweetness.

As grass gave way to shale another rusty cone framed another mound, this time of plant-covered earth.  More of these mysterious frames were grafted onto the land; hut circles or remnants of an alien visitation, or geometric stoppers on capped mine shafts?

Dr Strangelove loomed as the path widened alongside a neat Cornish hedge where notices referred to the Official Secrets Act and stern signs shouted, “MOD Property Keep Out!”

Nine foot high secure fence posts lined up at right angles to the path but there was no fence.  The path led through a series of ruins.

I climbed steps up the smooth concrete roofless structures to enclosed cells with steel grills anchored into the walls.  The site was labyrinthine, constructions dotted around the cliff top. In places, flowers and eyes were painted on the ruins, graffiti to ward off the evil eye.  Initials had been carved into concrete arches and Dennis the Menace and Gnasher adorned the walls of a long-abandoned shelter! We tried to read the past in the marks that were left behind in the haphazard maze.

Below, the deep sea was striped with rocks and shadows. A helicopter shadowed above as we walked around the now intact MOD fence, regular signs reminding us that entry to the area was prohibited.

Beyond the wire, deep steps led down to a sickly green pool. Beeps and screeches reached us from cranes and lorries that were moving around the huge mysterious sphere, always visible along this stretch of coast, yet never reached.

Ignoring the ominous atmosphere, we settled for our picnic on the tufted bank overlooking the sea near an abandoned sentry box.  In front of us, on the very cliff edge, clung a small lichen covered block with a central hole and wire fasteners.  Behind us there were more concrete buildings, diagonally grouped like a blast wall.

Nancekuke, our picnic place, was central to British defence policy during the Cold War. The Chemical Defence Establishment was established in 1950 on the site of a disused World War Two airfield above Portreath.  Its remoteness made it a key site for research into and the production of nerve gasses and chemical weapons.

Production of chemicals, including CS gas and Sarin, continued until the site was closed in 1976 when the buildings and equipment were decontaminated and buried. The site was re-opened as RAF Portreath in 1980.

Stocks of chemicals were either destroyed or transferred to other locations but large quantities of Sarin were stored at Nancekuke to test its shelf life. Sarin is a colourless, tasteless, odourless liquid which can evaporate into the environment. Exposure causes death in minutes. One of the world’s most lethal chemical weapons, it is categorised as a weapon of mass destruction. Little wonder then that the story of Nancekuke was kept secret until 1968 when information was leaked in the press.

In 1998 more information was published, as documents were released after thirty years; local people worried about the long term effects of the work undertaken at Nancekuke.

In 2000, it was reported that former workers at the base had died as a result of exposure to nerve gas and the matter was raised in the Houses of Parliament.

It was alleged that toxic materials had been dumped in nearby mineshafts and pits close to the shore. Although work to cleanse the site began in 2003, the worry remains that chemical waste could contaminate the sea.

Cornish poet, Pol Hodge, however, reassures us that, in spite of humans, the landscape will endure:

“In the harmony of beaches

there is only a tune of seawaves

and words by the winds.”

Liked this article? You can view December’s article by clicking here.