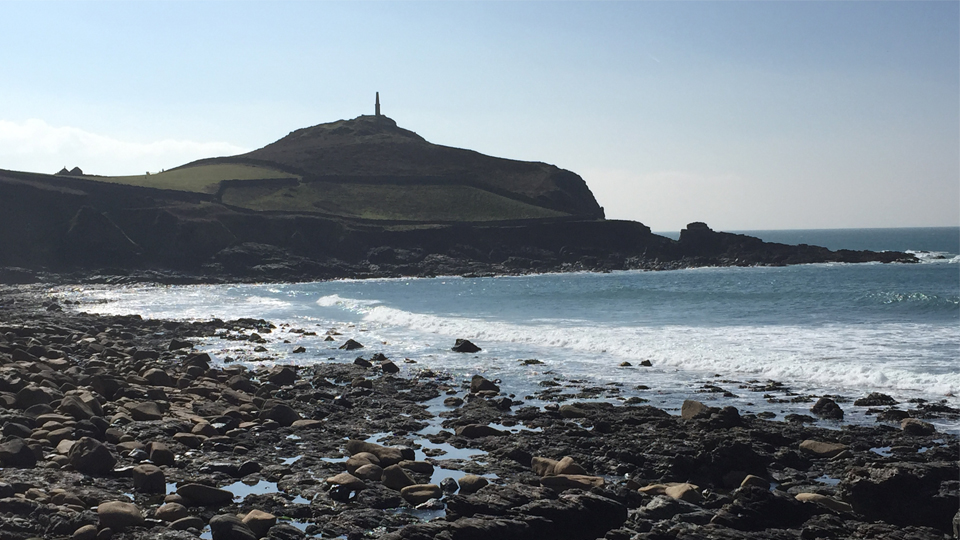 Join Alan Nance as he traces his great, great grandfather’s footsteps from Catalonia, France, to Plymouth. His relative’s old diary, which dates back to nearly 200 years before, accompanies him for the entire journey.

Read on to find out more about Alan’s story.

I arrived in Plymouth aboard the Armorique, he on the William and Amelia. I had walked a thousand miles across France from Catalonia, and had then been ferried across the Channel in just six hours. He had set sail from New Brunswick and had endured thirty-nine days on the Atlantic. His name was Richard, and he was my great, great grandfather.

In 1984, aged nineteen, I left Cornwall for London. There I studied, laid the foundations of a career, made friends and fell in love. When things fell apart I did what countless others have done before me and looked elsewhere in hope.

The choice of Barcelona was not a random one. I had Catalan friends and had spent several summers visiting them and their city. So, in January 1998, I returned there with the idea of spending a year, maybe two. Nothing permanent, just long enough to get back on track.

Richard Nance was born in Roche in 1791, and he was a carpenter by trade. On 14 June 1818 he left Plymouth aboard the Mary, bound for Halifax, Nova Scotia. I know this because he kept a diary of his voyage, a pocket-sized book that passed down the family line to my father.

On the opening page of his diary, Richard expresses the hope that he is going “for a better country, a more hospitable clime where it is possible that I may enjoy the Blessings of life in a far greater degree than I can in my native country”.

He reached Halifax in August 1818, and from there sailed on to Boston, where he soon found work and a small house to rent. On his second day in Boston he wrote in his diary that he believed “the New World to be much better for the labouring classes than the Old”.

The idea of walking from Catalonia to Cornwall came to me a few summers ago. By then I had long since settled in Barcelona, but that year I spent my holiday trudging across the north of England, following a coast to coast trail imagined by A.W. Wainwright.

When I returned to Barcelona I realised that the experience had taught me a lot about what we gain by travelling on foot, not least that it is a way of finding new and deeper meaning in our relationship to place.

Over the years, I had come to call Catalonia home, but this had always had its counterpoint in a longing for Cornwall. By walking between the two, I would follow that thread of longing to its source.

Having recorded his outbound voyage and arrival in some detail, Richard Nance then wrote nothing in his journal for two years. When entries resume, it is clear that the promise of the New World has faded. Permanent employment has proved elusive, and he has decided to return home.

He departed New Brunswick aboard the William and Amelia on 22 July 1821. On 10 August the ship met with a terrible Atlantic storm that lasted four days. In words reminiscent of Psalm 107 my great, great grandfather described the experience as follows: “Now the vessel skims the frightful ridge and again sinks into the deep abyss. In such dreadful scenes as these, horror and dismay seizes the vitals of those who are unacquainted with the wonders of the Lord on the face of the deep”.

Amidst the gales and the mountainous seas, however, he found solace in the purpose of his journey, writing that “the best of all is every heave of the billows wafts us nearer to our native spot endeared to our memory by the ties of love and friendship”.

Although my walk across France this summer was arduous, both physically and psychologically, the seascape on my Channel crossing could not have been more different to what my forebear experienced on the Atlantic. Mizzle fell upon the ferry’s decks as it pulled out of Roscoff under a sky the colour of Delabole slate, but I barely noticed the swell as we headed out into the Channel. Warm and dry inside the giant, metallic cradle I soon dozed off, and by the time I awoke, the early morning grey had given way to white and blue.

When I heard the announcement that we were half an hour from Plymouth I went out onto the upper deck and waited for the land to form. Gulls wheeled above me on the wind, and turning to starboard I spied the yolky head of a gannet skimming seaward.

As we passed the breakwater and entered Plymouth Sound I went and leaned on the portside rails, from where the first villages of Cornwall – Kingsand and Cawsand – could be picked out with the naked eye.

The ferry held a north-easterly course, and then, as it drew level with Drake’s Island, arced ninety degrees west, bringing it head on to the docks. I switched to starboard once more and anchored my gaze on the red and white hoops of Smeaton’s Tower.

Approaching Plymouth almost two centuries ago, my great, great grandfather would also have seen this tower, yet not as a memorial on the Hoe but as a working lighthouse further out to sea on the Eddystone Rocks. Even more than I, perhaps, he would have looked upon that tower as a prelude to home.

After landing at Plymouth, Richard Nance secured passage on a boat that would take him along the Cornish coast to Charlestown, from where he could travel over land to Roche. Due, however, to what he describes in his journal as “contrary winds” he had to wait almost two weeks before making the final leg of his journey home. I know nothing more about his life.

Ten days after my own arrival at Plymouth I reached the end of my walk, Cape Cornwall. I climbed up onto the promontory to where the old mine stack still stands, and there I sat, staring out over the sea, my mind drifting off across days and miles.

Finding it hard to take in, I took out my iPhone and scrolled through the GPS tracks, reassuring myself with hard data that the walk had been more than an act of imagination. The numbers were there – 77 days, 1132 miles – but they only told part of the story.

On the first page of my journal, however, I found something that captured more of what I felt there on the Cape. The day before leaving Catalonia I had recorded some thoughts, hopes and fears about the journey ahead, and among these jottings were some words written by the Spanish poet Antonio Machado:

It was time to go. I started down the path that leads to the remains of St Helen’s Oratory, but before I’d gone more than a few steps I was brought to a halt by a flash of red moving among the rocks. Red bill, red legs. Palores. True to its Cornish name, which means digger, the chough was pecking at the earth, just a few feet away. Of all the experiences I had been gifted during my walk, this unimagined encounter with another returnee felt like the ultimate reward for my efforts.

I thought then of the silence in my great, great grandfather’s journal, of how he wrote in detail about his two Atlantic crossings but very little about what happened in between, as if what mattered most was leaving and returning.

Perhaps he was aware of the Cornish word dehwelans, and of the psychological sting in its tail, for dehwelans means not only ‘return’ but also ‘atonement’. It is in the act of returning, it seems, that a Cornishman makes amends for having left.

Liked this article? Why not take a look at North Cliffs: Hell’s Mouth to Portreath?

Alan Nance
Alan Nance is a psychologist, translator, walker and writer. Originally from Wadebridge, he has lived in Catalonia since 1998. Currently at work on a book about the experience of calling two places home, he also blogs at www.walkinginmind.com and tweets @alanjnance.