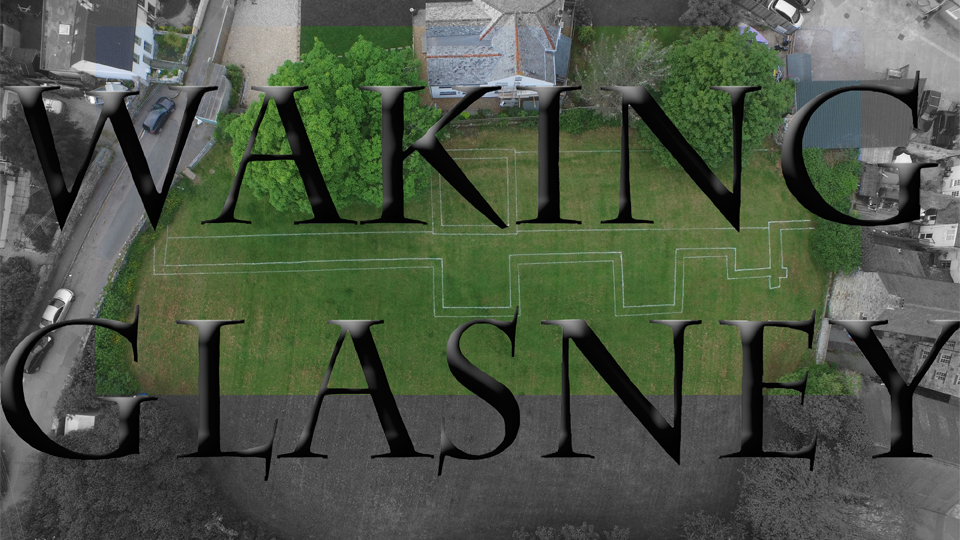 In May this year, Penryn Arts Festival covered the 750th anniversary of Glasney College. Above is a short film on the project by Shauna Osborne-Dowle along with her accompanying film statement.

Below this statement is a short article covering the event, written by Katie Etheridge and Simon Persighetti.

First of all, I need to say that a film is only ever as good as its content and Simon and Katie’s event provided an ideal subject.

As I documented their fascinating creative investigation into the site of Glasney College in the newly prepared Glasney Field, I was certainly not short of content. I was drawn in with great fascination and excitement as the project unfolded.

When dealing with history there is a natural Interplay encountered between fact and fantasy. Traditionally, we are most often working with facts and the proving or disproving of theories based upon these facts. This is the most socially acceptable approach to reviewing our past.

However, I do believe that it is the use of the imagination and creative fantasy which often provides the inspiration and motivation behind the study of a particular subject, and that when this creativity is acknowledged and integrated, it can imbue the subject in such a way to inspire others to quest further, to share knowledge, to seek and learn more, to experience things more deeply.

The relationship between history and the creative imagination while often overlooked exists currently in the form of modern day experimental archaeology, historical re-enactment and cultural ritual. Its main appeal is that it is experiential and therefore allows the participant to transcend time.

Simon and Katie’s project is a fantastic example of how fact and fantasy can meet and how, together, they can create something of ‘culture’ which then spreads out into a community and which will endure.

In my role as the creative documentary film-maker, I constantly embraced this interplay between the creative art of successful ‘story-telling’ and the responsibility of ‘correctly’ documenting a contemporary event, recording history effectively and capturing those moments in time, preserving it for future reference.

When making films I am aware that I am literally editing the facts, to create the story, which best captures the event to my mind.

I do this guided by the awareness of:

a) the attention span of the audience

b) the clarity of the information contained

c) the Aesthetics of the work itself.

In the editing process I am literally compressing time, fully aware that I am choosing to prioritise one thing over another.

In the case of Waking Glasney I managed to compress an event which took 4 days of real time into a 15 minute viewing experience. The making of the film Waking Glasney took longer in real time than the actual event it was documenting (except in preparation)..

It came to my mind that both history and film-making are dealing with fact and fantasy; also with time and documentation. Documentation and film-making both facilitate the preservation of the story and the sharing of knowledge, so now I’d like to share my film with you.

In May 2015 in Penryn, Cornwall, artists Katie Etheridge & Simon Persighetti created a series of public participatory events on the site of the former Glasney College, to animate, awaken, and map the ‘invisible’ building in the 750th year of its founding.

Two thirds the size of Exeter Cathedral, Glasney College was established in 1265 as a secular rather than monastic institution, a powerhouse of culture and learning which is believed to be the place where the 14th century series of Cornish miracle plays, The Ordinalia, was written. These plays form the repository of the Cornish Language.

Following the destruction of Glasney in the 1540’s, only a small fragment of the material fabric of the College remains visible above ground today, in the form of a wall in the corner of an open green field in central Penryn.

Hidden under the grass lie the extensive foundations of Glasney Collegiate Church. Last excavated in 2005, the site of the College is protected as a scheduled monument.

Commissioned by Penryn Arts Festival 2015, Etheridge and Persighetti’s project ‘In Polsethow shall habitations, or marvellous things, be seen’ saw the artists joined by special guests and experts for three days of performance, learning, and celebration; including an outdoor lecture, an archaeological drift, Cornish language readings from the Ordinalia, walking and dancing the outlines of the building, and visions of Glasney’s missing stones seen in the field at dusk.

The project was formed of two major elements. The first element was the creation of a large-scale installation on the ancient site of Glasney College. Using sports pitch marking, Etheridge & Persighetti drew a full scale 1:1 chalk outline of the footprint of Glasney Collegiate Church, working from plans drawn up by Archaeologists during the most recent excavations of the site.

With the assistance of cartographer Caroline Robinson, and equipment loaned by St. Gluvias Cricket Club and Penryn’s mayor Mark Snowdon, they were able to create a detailed life-size blueprint of the College buildings that made visible what is currently hidden underground.

The installation lasted for several weeks. Hundreds of people saw the artwork during the Festival week, and many more saw the fabulous aerial shots captured by Cornish Drone.

The second element of the project was a series of live participatory events conceived to awaken the mapped site and its outlined rooms.

During Penryn Arts Festival, the installation was activated with performance, ritual, learning and celebration. Etheridge and Persighetti worked with over 30 guest artists and participants including musicians and dancers (Tros an Treys and friends), Cornish language bards from Gorsedh Kernow, cultural historian Michelle Brown, and artist-researcher Lori Diggle, to deliver 6 live events.

All events were free and open to all.

Audiences included at one end of the spectrum Penryn residents who were visiting Glasney College Field for the first time, and at the other, those who had been engaged in the 2005 Archaeological Dig and were able to stand in the field exactly on the spot where they had worked.

The mapping project helped Festival visitors and residents to visualise and interact with the site. For example, people began to play with the space by walking along, or dancing the ‘invisible’ walls.

One of the projects intentions was to facilitate relationships between people who live in Penryn, and the tangible material evidence of its extraordinary history. For example, the small child who was invited to handle a stone from Glasney, and then started to explore every stone in the field, asking – “Is this Glasney? … Is this Glasney?”

The live readings from the Ordinalia, in Cornish with an English translation, elicited perhaps the strongest reaction. The involvement of Gorsedh Kernow in the project was significant, and something that developed from an open invitation to be involved, into a co-created event that had a real resonance for participants and audience.

Many visitors commented that prior to encountering the project they were unaware of the long-term influence and significance of Glasney College, particularly with regard to the Ordinalia and it’s importance to the Cornish Language.

The physical marking of the footprint of the Church has triggered a developing dialogue about the desire to celebrate the Glasney story more widely. It is as if the project, in responding to the history of the site, is also a bit of history in the making.

This article was written by Katie Etheridge and Simon Persighetti.

Katie and Simon are artists, performance makers, and educators based in Cornwall. They create and produce projects locally, nationally and internationally that explore the interrelationships between people and place.

Simon is a core member of Wrights & Sites, a group of performance-trained artists producing international site-specific performances, walking projects, publications, and other art works since their formation in 1997.

Katie is the face behind Faceback, the live art game that has gone viral at Festivals and events across the UK, connecting 1000’s of people who wouldn’t normally meet.

‘In Polsethow shall habitations and marvellous things be seen’ was commissioned by Penryn Arts Festival and funded by FEAST and Arts Council England, with additional support from Falmouth University and Penryn Town Council.

Shauna Osborne-Dowle
As well as making films, Shauna is also the Cornish Audio Visual Archive’s Outreach Officer. She makes and directs her own original films and documentaries and has her own production company, Medial Productions.