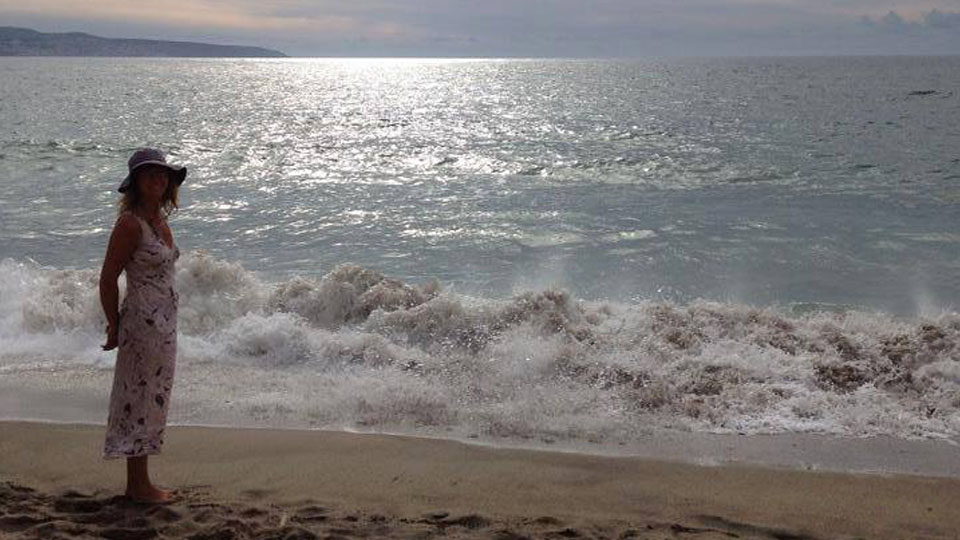 In this new regular series of features she will be mapping these kinds of stories onto the physical landscape of the Cornish coast. Read on to discover more.

The estuary at Hayle is treacherous as the tide rushes in. In 1863, John Harris told a story rooted in popular memory of how a destitute miner had drowned there: “A black-chamber’d wave / Rolls with a roar upon him, the loose sand / Yields underneath”.

At Mexico bay we found a World War Two pill box, low in the dunes, perfect for raking machine gun fire across the beach in anticipation of an enemy invasion.  The only invaders now were bravely riding the waves in black rubber suits, lonely, beating the surges in the slate grey sea; modern selkies.

Walking on, the landscape was desolate; sand blasted palm trees and circling black crows. A man in a faded Hawkwind t-shirt with a fierce dog on a string passed us beside a ramshackle café in a shipping container in a car park. Another man wielded a metal detector over the sands, searching for loose change.

The poverty dramatised by Harris lives on.

Closer to Gwithian, scattered slate markers among the regularly spaced ruined concrete buildings, with arched windows, like in mines and chapels, record the old explosive works here in the dunes, established in 1888 to supply local mines.

Last used in the First World War to supply naval explosives, compacted gravel paths trace the network of single line rails. Deep craters in the dunes, lined with whorls of grass, provide further physical evidence of the incongruous industrial past of this nature reserve.

A jackdaw cawed hoarsely as house martins swooped, catching flies on the wing; already preparing for their exodus to warmer, more welcoming climes as we detoured to visit the tiny Methodist chapel at Gwithian, where the spiritual life of the area can be traced back by a thousand years, although much is buried in the constantly moving sands.

Near a tiny fairy tale cottage by a stream where foxgloves and deadly nightshade cast shadows, not yet sand swallowed, the chapel is the oldest thatched chapel in Britain, wattle and daub, berries and flowers carved into the pine.

Methodists gathered here from 1767, their names on the walls recalling the thatchers and farmers, weavers and tinners who lived and worked and died here. Visiting preachers, so the story goes, still have the right to stable their horses at the pub next door.

Charles Thomas, the local archaeologist responsible for preserving the chapel at Gwithian, unearthed stories about the people who have lived here in the shifting landscape and recorded these stories before they became lost in the sands of time.

In the Parish Magazine, Godrevy Light, Thomas describes Chester Marchant who, according to oral tradition, died in Gwithian in 1674 aged 164! She is said to have been a Cornish speaker who spoke no English, although Thomas speculates that she was a Breton-speaking immigrant and suggests she lived to 104.

In another article, Thomas recounts the story of Benjamin Cock, whose grave outside the Parish Church tells us only that he died in 1812 aged 32. Professor Thomas tells how, as a young boy, he had a conversation with an old man who told him that Gwithian men walked with their toes turned in on account of the sand.

Ben Cock, the old man recalled, was the strongest man in the parish; he could scythe a whole field of corn quicker than anyone and would then go the pub and down half a gallon of ale in one go. He was a giant in size but his fondness for his “mighty ale jar”, kept in a long forgotten alehouse opposite the church, The Farmers Arms, was his downfall.

The Cock family had been in Gwithian since before the sixteenth century. The last member of the family died before World War Two.

It is strange to think that the grandfather of the intemperate Ben may well have encountered Wesley riding through their village in 1757.  It was another relative, Alice Cock, who is remembered as the miser who left a fortune to her six year old grandson in 1843.

We returned to the present and to the coast at Godrevy, drawn, like James in Woolf’s famous novel, by the lighthouse, “ a silvery, misty-looking tower … stark and straight”, both a physical reality on the rocks battered by the cold, grey sea and the idea of a place that endures.

If you enjoyed reading this article, you can read Jackie’s previous entry for last month here.