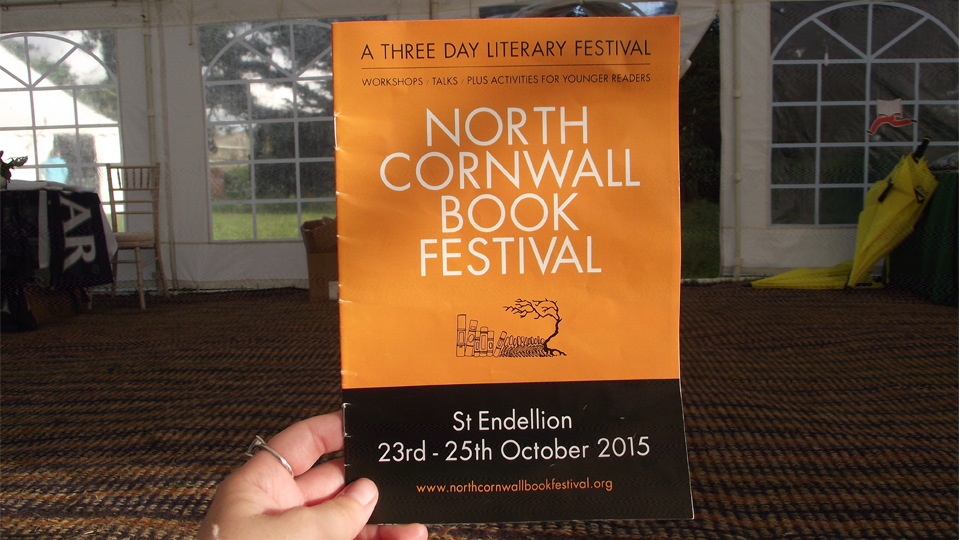 Located in the small village of St Endellion, the North Cornwall Book Festival is one of the most intimate venues for a book festival, just bursting with character and charm.

Contributing writer Emma Gibbs gives insight over the event, keeping in mind what it is that makes this festival so special.

Despite being in its infancy, this being the third year running, the North Cornwall Book Festival never fails to gather remarkable talent across the literary scene – with renowned bestselling author Patrick Gale hosting, I suppose we can expect nothing less.

On 24th October I spent the day at a remote location in Wadebridge, home to the North Cornwall Book Festival. Despite getting a little lost we made it to our first talk in good time. It was bleak outside, but the marquee was warm and inviting with beautiful tapestries of storks and bamboo. There was something very intimate and friendly about the festival. The guests, authors and poets alike, were very accessible – they may have even sat next to you in the audience.

Our first talk was with romance novelist Alison Mercer. Patrick Gale began with the question that everybody usually wants to know about successful writers, namely where did it all begin – did you always know you would be a writer? Mercer treated the audience to a brief appearance of her first story Solitude, a book about love which she wrote when she was about 9 years old.

‘Although, after university I did stop writing for a time,’ she said. ‘I lost my nerve.’

Patrick Gale responded with a keen observation that sometimes students can be completely crushed by all the genius of the writers they’re studying. I think there is much truth to that – being a creative writing student can be both a blessing and a curse.

Moving on to her debut novel, Stop the Clock, Patrick Gale expressed surprise at the ‘pink and fluffy’ cover which somewhat contradicts the content. On this Mercer humorously responded: ‘Yes, I think in reality it should have had a picture of a screaming baby – the book is packaged as a romance, but it’s really a tough novel about motherhood.’

They concluded that perhaps the romance genre has become conventionalised, much like the young adult fiction that we see on the shelves today.

Mercer discussed how some characters in her book were drawn from real-life, from her time as a student at Oxford admitting that this became a sort of anxiety while she wrote the book.

‘Everybody I know from that time would read it and look for themselves,’ she said smiling. Patrick Gale added rather humorously that writing a novel is like a ‘socially acceptable mental illness – you get to live with imaginary friends.’

When asked about her poet husband, she said: ‘It was his voice that I was attracted to. And I think that’s a key part of being a writer – finding your voice.’ Mercer’s latest novel After I Left You has received glowing reports and is available to buy online and in book stores.

After a quick tea break we were treated to a discussion with Encore Award winner Neel Mukherjee and historical fiction author M. J. Carter. They discussed Carter’s new novel, The Infidel Stain – which she describes as a historical crime fiction set in colonial India.

‘I never thought I’d write fiction,’ Carter began. Carter began her writing career as a freelance newspaper journalist and went on to land a job at Elle Magazine in London. After becoming ill, she left her journalism career to pursue fiction.

Carter touched upon the cult assassins of India, also known as Thuggees, and the disputes over whether or not they actually existed. She also meditated on the nature of history, observing that ‘we have very short memories when it comes to history.’ I couldn’t agree more.

Mukherjee, being born and educated in Calcutta, praised Carter’s attention to detail with Indian culture, such as the water bowls used for bed and piano legs to prevent bugs crawling over the furniture.

Carter said, ‘It’s important to visit the place that you are writing about. I visited India for 2 weeks and it was only by being there that I could experience the effects of the heat and experience the sounds and the smells.’

I have to admit I was so intrigued that as soon as the talk was over I bought Carter’s book.

Last but certainly not least, Patrick Gale welcomed Patricia Dunker onto the stage to give a fascinating insight into George Eliot with regards to her new novel Sophie and the Sybil, where Eliot became the inspiration for the other woman in her neo-Victorian romance. Gale described Dunker’s writing as ‘terribly hard to put into a box.’

During the research process Dunker gave great attention to literary celebrity, citing that ‘you can’t really discuss Eliot without that.’ She introduced Eliot as ‘notoriously ugly’ but also someone that ‘really cared about knowledge’. And it was this, she believes, that made men fall in love with her.

I perked up when Dunker made the somewhat cutting opinion that creative writing should not be taught at university. ‘It’s not a discipline, it’s a craft. You don’t learn anything,’ she said. Dunker was speaking from experience as she taught creative writing at Aberystwyth University for a time.

However, being a creative writing student at Falmouth University myself, I have to disagree. I have learnt a great deal and gained experience and confidence in my writing where I would have struggled to find it on my own. But I absolutely agree that writing is a craft and everyone is entitled to their own opinion on this matter. I digress.

When Patrick Gale asked about her views on the publishing industry today she had much to say about its evolution: ‘I think it’s changed enormously just in our publishing lifetimes,’ she began.

Dunker also voiced strong opinions of the tensions and relationships between the small press publishers and corporate publishers.

‘Original thinking, visionary thinking does not exist in corporate publishing,’ she began. ‘It’s a culture that likes what everyone else likes. It’s extremely annoying when a small press does the work presenting a new, risky author and then it’s taken and stolen by the big presses.’

She went on to discuss the digital revolution where Gale reminisced on a discussion with children’s author Jill Murphy who was baffled by all the school students that turned up to the festival with digital tablets instead of physical books.

‘I like the physical experience of the book,’ said Dunker – something which I and many book enthusiasts can always agree with.

At the end of the day I think it’s safe to say we went home feeling inspired and a little more intellectual!

I am sure next year’s festival will be just as enthralling as this one, and I cannot wait to see which literary figures will appear on the program. For all literary enthusiasts, whether you live in Cornwall or not, I can strongly recommend the North Cornwall Book Festival.

If you enjoyed reading this article, why not take a look at Gig Rowing in Cornwall?