Nancledra has been called Nancledry, Nancldrea and Nancldery in the past which probably means ‘valley’ in Cornish. This profile of Nancledra Wesleyan Chapel has been compiled by Val Thomas of St Ives Old Cornwall Society with additional information from Jean Nankervis of Wicca and Mr Sherwood of Wheal Kitty. 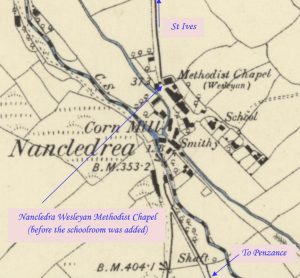 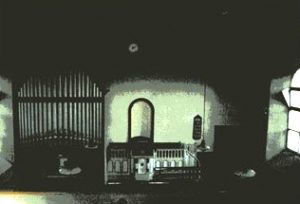 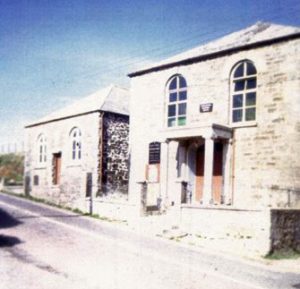 1836 Mr John White, the miller, placed his barn at the children’s disposal as a Sunday School. He was appointed Sunday School Superintendent and for eight years his barn was carefully swept and cleaned, and forms placed ready for the children every Sunday. The site was believed to be above the shop, which is now closed.

1844 The Sunday School was an established and thriving part of the village community, so much so, that the St Ives Wesleyan’s decided to include Nancledra in their circuit. The Nancledra Wesleyan Chapel was built and the Sunday School transferred to it. Lighting was with candles until oil lamps were used. For a time the singing was unaccompanied but later they had a fiddler. Next a harmonium was used which was later augmented by two brass instruments, a bass and a trumpet. Finally an organ was installed. In 1844 there was seating for 210 people.

1851 William Burgess was the minister (he completed the returns on many local chapels).

Later, a separate building was erected for the children beside the chapel. Eventually this proved to be inadequate for all the activities going on.

1870 July. Mr. Magniac presented a petition to the House of Commons on behalf of the Wesleyan Chapel Nancledra, St Ives, in favour of the Permissive Prohibitory Liquor Bill.

1894 September 6th.  The Cornishman newspaper carries an advert for a harmonium player. Apply to Thomas Eddy or William Mitchell, chapel-stewards.

1899 Tenders were invited for painting and decorating the chapel on or before 22nd April: Particulars to Thomas Eddy at the Post Office. In August the Tolverth choir gave a service of song. Miss Carbis accompanied on the harmonium and the collection was good.

1904 The front porch was added. The Cornishman newspaper of Thursday September 22nd reports: 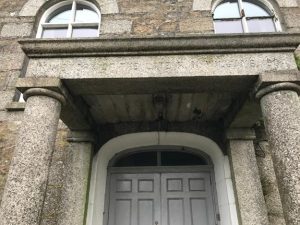 1905 A successful mission was held by Mr Binks.

1906 The Band of Hope entertained in the Wesleyan Chapel, assisted by the choir. Mr T. Osborne presided.

Services were held on Christmas Day in both the afternoon and evening. Towednack brass band played carols throughout the village during the day.

1912 The Cornishman reported a procession of 120 children from the united chapels of the Nancledra Area. This Sunday School Treat on Easter Monday was a much-looked-forward-to event and led by the Towednack Brass Band. The children, faces washed and tidily dressed, proceeded around the district with banners flying before going back to the Sunday School for tea. This always consisted of a 16oz. Saffron bun for each child and tea with sugar. Lots of emphasis was put on the sugar, so maybe this was a treat in itself. After tea they went into the adjoining field to let off high spirits with fun and games.

1917 August. The St Ives Platoon V.T.C. attended the morning service. They were joined on the march by the Lelant, Zennor and Towednack sections. An excellent sermon, befitting the third anniversary of the war, was preached by Mr. John Vivian, J.P. 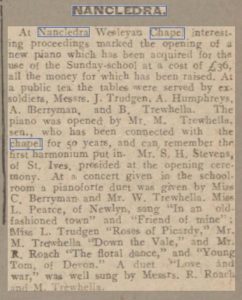 1922 The chapel formed part of ‘The Gilbert Estate’, West Cornwall and was offered for sale on 18th May at St John’s Hall Penzance. ‘No 11, A Wesleyan Chapel & school. Nancledra, Towednack, leased for 1892 + 99 years to Thomas EDDY’.

1932 The chapel became Nancledra Methodist Church. In June large congregations attended the chapel anniversary services. Mr T. J. Matthews of Paul was the special preacher. In the afternoon a musical service was given by the Newlyn Prize Male Quartet who performed gain after the evening service. Mr Williams accompanied. Mr. T. H. Eddy was the steward.

1934 Nancledra Chapel was registered to perform marriages. One of the first couples to be married there celebrated their Golden wedding anniversary at morning service in October 1984. They were Kathleen and Willie Osborne, now living at Ponsandane in Penzance.

1944 The harvest festival services were held over the last weekend of September. It is now called Nancledra Methodist Church. The first service was on Friday evening and there were two services on Sunday – morning and evening, which were well attended with a concert following the evening service after which there was a sale of fruit and vegetables.

1947 On June 12th The Cornishman newspaper carried an advert inviting people to the chapel to hear one of the two concerts by the CLIMAX Male Voice Choir. The Chairman for the afternoon was Tolfree Parr, Esq, Penzance and the evening Rev. C.H.S. Buckley, Gulval.

Further information can be obtained from Kresen Kernow: 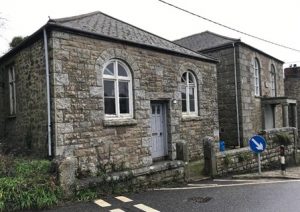 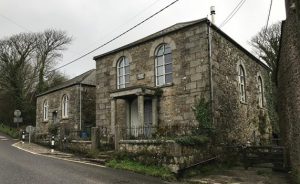 *The Chapel and front courtyard walls, gate piers, gates and railings are all Grade 11 listed.

The following information is from Jean Nankervis who remembers the inside of the buildings:

It had wooden pews and wooden kneeling planks. Inside the porch was another porch where you could take off your coats. Stairs led up to the balcony which was very steep and you could look down on those below. The sun shone in through the big, rounded windows on the white walls during morning services. The organ was on the left at the front, as in the photo. The pastor entered from a door on the right. The communion things were kept at the back where a corridor joined it to the school room. The schoolroom had a stage and I remember the WI doing refreshments when we met there but the kitchen was very small.

One of the early recorders (Morton Nance?) thought Nancledra meant the valley with a dwelling on the slope. Oliver Padel thinks it is probably the valley of Clodri. 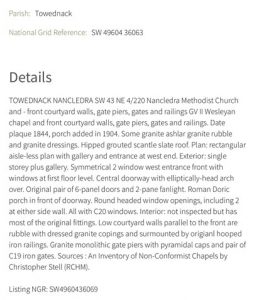 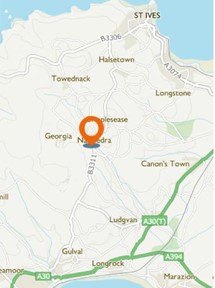