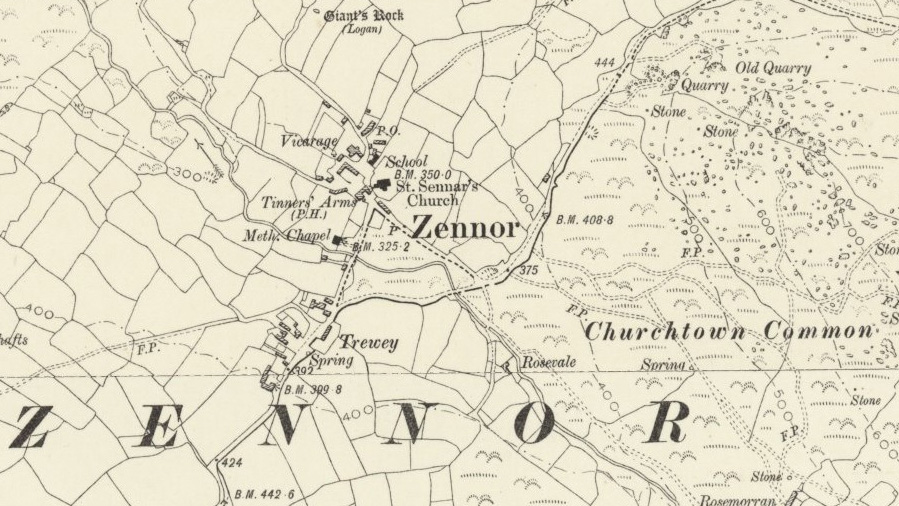 Zennor lies on brooding, rocky and windswept moorland a few miles from Lands end on the coast road to St Ives. The village is steeped in history. D H Lawrence wrote that “…it is the best place I have ever been in, I think.” People have been living here since the Bronze Age. A large stone by the road which leads into the village is thought to have once been used as a pulpit by Wesley. St Ives locals are called ‘Hakes’, there are ‘Towednack Cuckoos’ and ‘Zennor Goats’. Zennor Churchtown Wesleyan Chapel profile compiled by Val Thomas, St Ives Old Cornwall Society.

Image: Malcolm Osman from ‘St Ives, no bones about it’. “The view is taken from the B3306 road from St Ives to Morvah which winds it way past the road into the village. In the photo, the hill to the left is Carn Galver – home to witches etc if local legends are to be believed.” 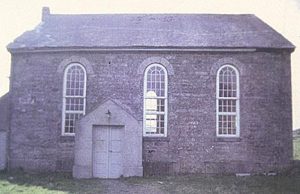 1743: Charles Wesley initially preached at Zennor on Wednesday 20th July, and expressed, with unqualified optimism, the belief that the parish had ‘Come in, to a man, at the joyful news. Some hundreds of the poor people, with sincerity in their faces’ received him. At 8a.m. the next morning, Thursday 21st he preached on the subject of the Good Samaritan (Luke 10:29-37) but he “could not proceed for pity to the poor mockers”. Wesley “Urged and besought, and with tears even compelled them, that God might grant them repentance unto life.”

On the 7th September Wesley preached to 200 – 300 people at Zennor: he found much goodwill in them, but no life.

1744: On April 10th Wesley records in his journal that he walked over to Zennor, and, after preaching, settled the infant society. Charles Wesley returned to Zennor on Sunday 22nd July when Wesley accused the Rev. Symonds and his drunken companions of ‘scurring’ against the Methodists!

1746: Wesley again rode to  Zennor, before the church service began, and preached near the churchyard.

1747: Wesley accused, in a letter, William Symonds, rector of Lelant and William Hoblyn of this place (St Ives and Zennor) of having to be led home at one or two in the morning in such a condition as he dare not describe.

1748: The Wesleys in Cornwall says that “Wesley once more attended church service at Zennor on Sunday 25 September 1748, and after listening to a ‘close, awakening sermon’, he sought to enforce the message by his own words on Mark 12:34.”

1750: Wesley again addressed a ‘great multitude’ at Zennor following the evening service on Sunday 19th August. On the following day, Monday, he conducted a general meeting of the Methodist society stewards and held ‘a solemn watch-night.’

1760: “Sunday 14th September, he began to preach there as soon as the church service concluded, noting that ‘scarce six persons went away’ and focusing his attention on individuals in particular.” etc.

1768: John Wesley’s final visit to Zennor occurred at noon on Friday, 2nd September 1768, when he preached to “an earnest company”. The book also says that Wesley never appeared to have developed a deep commitment to or involvement with, the people of Zennor, even after a dozen or so visits to the place.

1881: The Wesleyan Sunday School celebrated its anniversary. The Wesleyan choir from Crowlas was present. Mr Pascoe presided at the harmonium. Funds being much needed for carrying on the important work of the Sunday-school, the collections were good.

1882: Tuesday October 3rd: a Harvest Thanksgiving was held. Large numbers not only from adjacent places, but also from distant parts of the circuit were present at the repast which followed the service in the chapel. In the evening a public meeting was held in the tastefully decorated chapel. The mayor of St Ives attended.

1884: The interior of the Wesleyan Chapel was tastefully renovated by Mr T. H. Williams of Penzance and St Just, house decorator. The painting, graining, varnishing, gilding etc was done to the satisfaction of the trustees. It was reopened on Sunday 17th August. 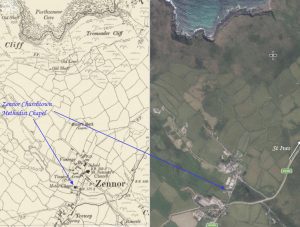 1891: Dec 10th A ‘service of song’ was given by the choir. Miss Rachel Williams was at the organ. The proceeds were for the Sunday-school. 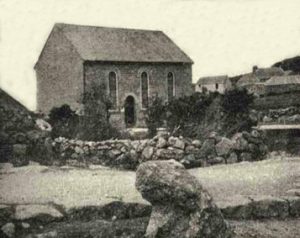 Zennor Chapel taken by Henry Hawkins in about 1896

1902: In July the annual children’s tea was held on the Saturday with music provided by the St Just band. Headed by their beautiful banner the children marched in procession to Boswednack, Kerrow, Tremeadow and back to Churchtown. A large number sat down to tea, during which the brass band rendered selections of music. Sports and games were played until dark. The Sunday services were in the afternoon and evening.

1896: The Sunday-school treat was held headed by Pendeen brass band a procession of teachers and children paraded to the principal villages in the parish.

1899: Miss Asford, a well known evangelist in connection with the Weslean home-missions, commenced a fortnight’s mission on Sunday next. Services were at 11 and 6 on a Sunday and during the week at 7pm.

1901: 25th September A public tea was held on Saturday afternoon in connection with the harvest festival. In the evening there was a service of song’.

1923: The West Briton and Cornwall advertiser of Thursday 17th May  said:  “Zennor Chapel re-opened”. Zennor Wesleyan Chapel, after being closed for several weeks for reapirs and re-decoration has just been re-opened, the ceremony being performed by Mrs Foster of Eagl’s Nest. The service of re-dedication was conducted by the Superintendent minister, Rev. J. Colliver Williams, who remarked that at Zennor there was a true spirit of unity, wider than the anticipated Methodist Union. The sum of £79 8s had been spent on the work and the chapel has re-opened free of debt.”

1973: Kresen Kernow holds the manuscript for the sale of the Methodist Church. MR!HY/105 . The chapel was turned into a backpackes hostel and cafe. 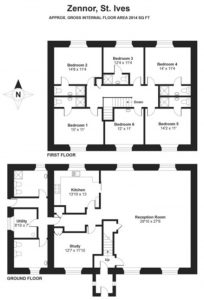 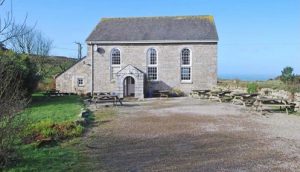 2021: The Chapel is again up for sale and the floor plan and photo are from the particulars on ‘Rightmove’.

Rightmove: sale particulars for the chapel

A History of the Parishes of St Ives, Lelant, Towednack and Zennor – John Hobson Matthews.

Find my Past newspaper reports.