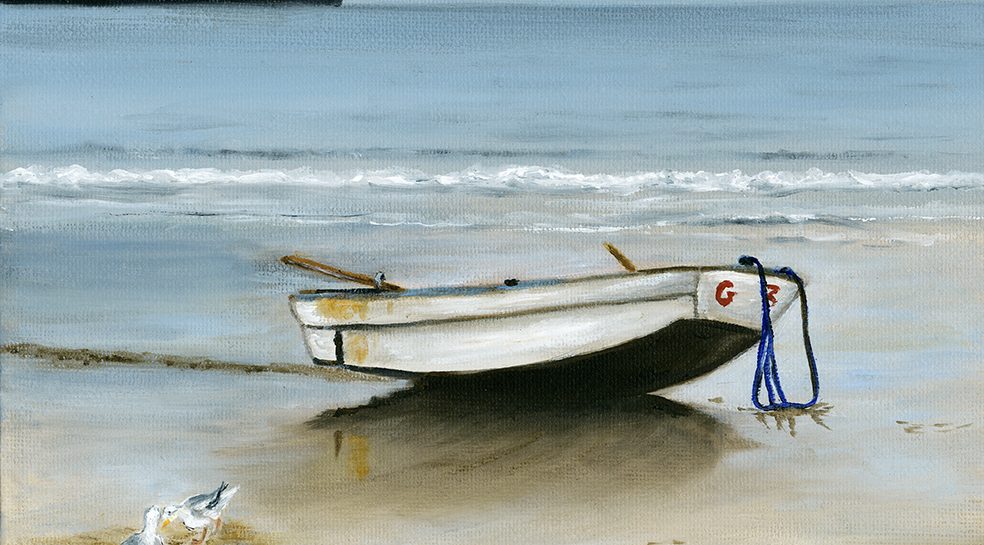 Thomas J. Kennedy is a sub editor with Cornish Story Online and an active contributor to the cultural research of the Institute of Cornish Studies. In this article he focuses on the charming art work of the Probus-based Cathy Stringer as the first instalment of a new series highlighting the work of present day Cornish artists. 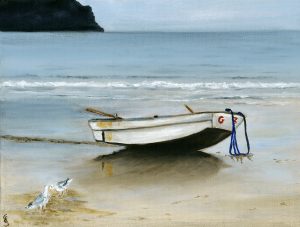 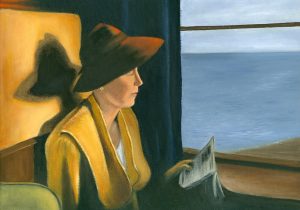 Cathy, has lived in different parts of Cornwall for the greater part of her life. As a human and animal portrait painter Cathy, informed;’ I am in awe of the unique, wonderful light, which illuminates the natural world about Cornwall, This aspect’ she added ,’coupled with the eclectic variety of  available subject matter, be it be, either  human or animal, ‘for me’ is  an idyllic combination.”

Cathy interestingly concluded that  she particularly enjoys painting children on the beaches of the Cornwall. ‘As such paintings’, she implied, ‘can be timeless, reminding many people of their own childhood.’ 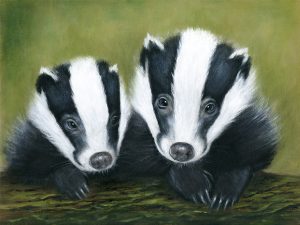 Painting Cornwall’s wildlife and domestic animals that have a particular quirky character is another of Cathy’s favourite genres. Her art for example, can be seen in the TV  Arla Milk advertisements which features her painting of a Cow on a pub sign. Cathy’s works other than those illuminated in this article can be seen on her web site (www.cathystringer.com). In addition her work has been on permanent exhibition for many years at The Print Gallery, in the Cotswolds village of  Broadway

Cathy’s work has been frequently exhibited in Cornwall at venues such as the Barn at the Lost Gardens of Heligan. Her paintings are also frequently shown for the enjoyment of patients, staff and visitors alike at Treliske, Cornwall’s largest hospital.

However as previously stated some of Cathy’s most evocative images are those depicting children at play on Cornwall’s beaches. To categorise the works of Cathy Stringer and file them in a single pigeon hole, labelled with a specific tag, would be unflattering, however her ability to capture an image of one moment in time allows that there are elements of Impressionism in her work as originally fashioned  by J M W Turner, RA (1775- 1851) then developed by impressionists such as Oscar Claude Monet (1840 -1926)

Both Turner and Monet painted outdoors (en plein air) to capture the appearance of the light as it flickered and faded while they worked. It is interesting how often viewers of art works overlook in paintings such elements as shadows, which can give a fair estimate of time scales, as does a Sun dial show the shadowy passage of time, similarly  shadows cast by both animate and inanimate objects in an artist’s work do the same thing. For example, in Cathy’s works the position of the shadows in her paintings would, to an avid nerd Sun dial horologist, pin point the time she painted her studies. This is clearly evident in the Confrontation visual narrative in the painting depicting a cute little girl and a gull. The gull casts a menacing shadow in the child’s direction as she presumably digs for sand crabs or worms, and the gull, as scavengers do, seeks to steal the fruits of her labour. As to element of light this is shown in the Confrontation, simply and effectively demonstrated as  the silver rippling  wavelets’ glisten as they move from the deep blue sea to the shallower wet green foreshore. Needless to say the Confrontation image paints a thousand words. 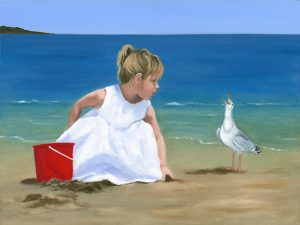 The contrast of how light effects the mood of a painting and its viewer can be illustrated  by comparing the image of the Confrontation (plate 4) and the Boy on Pendower Beach (plate 5).

In the painting of the boy the image is more sombre than that of the poppet confronting the gull. The image of the boy may ask the viewer, to interrogate the activity of the boy more closely, given he is without company all alone on a dull day. 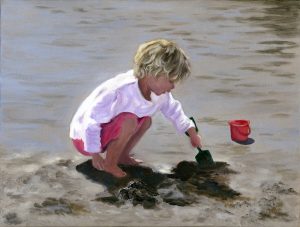 The painting of the girl in the sun hat (plate 6) again shows how subtle changes in the sea’s reflective nuance changes the mood of the overall image in that the surface of the sea is not too blue and not too grey, an analogy with Goldie Locks porridge may perhaps be made, not too hot not too cold, a perfect state for reflective thought. Yet it is not just children Cathy depicts on the foreshores  of Cornwall’s beaches, as plate 7 is a portrait of the Cornish bard Mac Waters tending his pots. 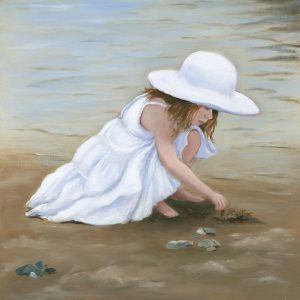 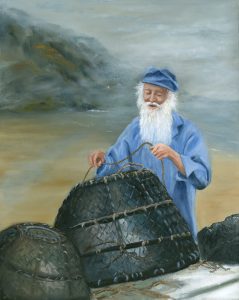