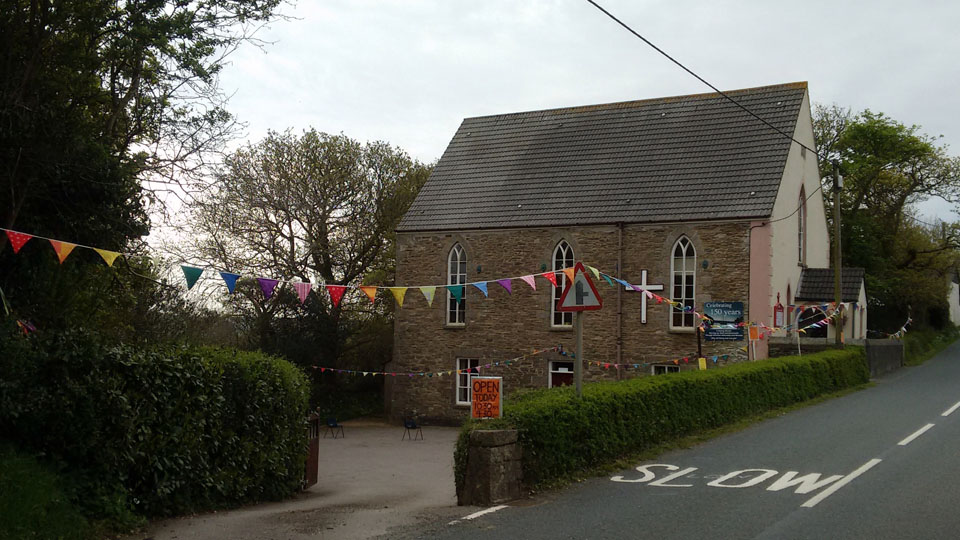 This month features a short history of Feock Chapel to coincide with its 150th anniversary.

Over the past few centuries Cornish history and Methodism have been intrinsically linked. There are few communities in Cornwall that do not have a Methodist Chapel – whether still used as a Chapel or repurposed into a dwelling or other use. This year, Feock Chapel celebrates its 150th Anniversary.

Methodism was brought to Feock by Elizabeth Tonkin in the 1780s. Originally from Gwinear, near Hayle, Elizabeth converted to Methodism at the age of 16, thirty-five years after John Wesley’s first visit to Cornwall. After moving to Feock in 1782 and discovering no Methodist Society in the area she started one in a house at Sandoes Gate, on the road to Trelissick House.

Elizabeth went on to become one of the first female preachers in Cornwall and founded seven Chapels in and around the Roseland area after her marriage, whereupon she moved to Veryan.

The Society in Feock grew and a new meeting house at Sandoes Gate was registered in 1807 – sadly nothing remains of this building today.

In 1819 a new Chapel at Goonpiper was registered, in the location of the present building. The congregation grew and by the 1860s it was necessary to construct a new building. Completed in 1866, seating for 250 was available in the Chapel and gallery, and below it a Sunday Schoolroom, vestry and stables were contained.

Structural issues meant that the gallery was removed and the roof lowered in 1881, but since then the external building remains virtually the same.

Where the building provides a meeting place, it is the people inside it that keep the Christian message alive. Feock Chapel congregation members have always had a strong family-like bond, a trait that continues to this day. Through historic documents, photographs and personal memories there are names, characters and families that are reoccurring, recalled with fondness countless times. Like Elizabeth Tonkin, these people have provided a foundation stone of faith for many. Generations of families have, and continue to, attend worship here.

One of the most recognised Methodist institutions is the Sunday School, providing values and education to children through the years. Feock Chapel has a history of an active, well populated Sunday School, and due to this has far reaching friends and connections.

To mark the 150th Anniversary of the current building in 2016, the Chapel was transformed as the celebrations culminated in a day long exhibition. It is estimated that about 180 people visited the ‘Walking through the Decades’ exhibition celebrating the history of the Chapel and its fellowship. A variety of photographs, memorabilia and stories through the life of Feock Methodist Chapel were displayed.

A history book and selection of memorabilia has been produced, and a variety of other celebratory events are being held throughout the year. For more information, please visit: www.feockmethodist.org.uk

Jessica Hodges
Jessica Hodges is a Cornish Methodist whose family has attended Feock Chapel for at least 5 generations. She is a history graduate from Cardiff University.