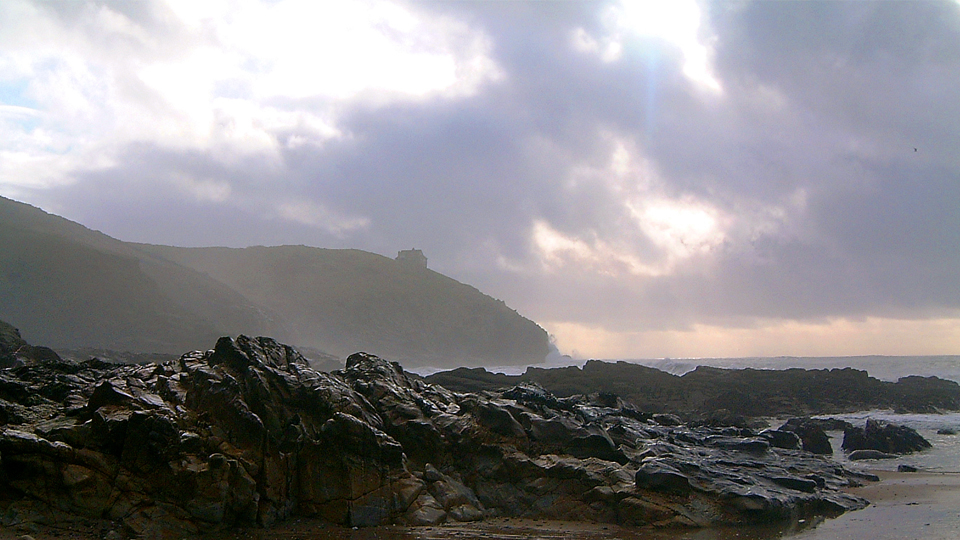 English with Creative Writing student Enya Nwaegbe reveals her reflections on the Cornish weather, contemplating the possibility of another severe storm, similar to one three years ago.

I came to Cornwall three years ago to attend university and I never gave much thought to the Cornish weather. But now I personally believe that Cornwall has its own weather system compared to the rest of the country.

It seems that by the time the weather has travelled from South West to South East it evens out. Cornwall appears to get the brunt of the weather given its position on the Atlantic coast. I have heard many people say that ‘the Atlantic Ocean is the most violent on our planet.’ I guess this is true because, about three years ago, Cornwall got the brunt of a violent storm.

This storm was the first real storm that I had ever experienced. Yes, I have been in thunder storms before, but they were nothing compared to this.

I was in my first year of university when the storm hit the South West. It was about three o’ clock in the morning and I woke up to the sound of the rain; torrential rain pounding and pelting against my dorm room window. There was a really loud noise and the ground shook.

My first thought was, ‘oh my God, is this an earth quake?’ I debated with myself for a minute whether I should get out of bed and hide under my desk. I realised that it was a storm after I saw a bolt of lightning streak across the sky. I couldn’t calm myself down – for the first time in my life I was scared that something bad was about to happen. My heart was pounding in my chest, but I was relieved that it was just a storm.

When I woke up the next morning I was expecting to see a lot of damage on campus but there wasn’t any, apart from some fallen branches on roads and pavements. There were blue skies and the sun was shining – the calm after the storm is how I would describe it.

The rest of Cornwall, however, wasn’t so lucky. Towns that were right on the water front had damaged roads; flooding, trees fallen down, and boats destroyed. But what really showed me the ferocity of this particular storm was the damage done to the train lines at Dawlish in Devon.

The foundation for the train track had been completely washed out to sea, and the actual track was just a floating platform.

I knew storms could be really destructive. I just didn’t know how much, as it is really different watching the news and seeing what is left behind after a storm. It is not until you live through one that you actually understand how dangerous and destructive storms can really be.

For the past two weeks or so, the Met Office has issued weather warnings to different parts of the UK, as we are getting the tail end of what they are calling Hurricane Abigail off the Atlantic.

Just walking to university the other day was a battle, as the wind was so strong that it could push you backwards. I do wonder whether we will see another storm like the one three years ago.

Climate change has affected our planet and our weather system so much that I would not be surprised if we get another huge destructive storm, and at some point I think it is going to be worse than the previous one.

The weather in Cornwall can be very unpredictable. Now that we are in winter I spend about fifteen minutes deciding on which coat to wear out of the house. I want to wear my nice warm wool winter coat, but because I don’t know whether it is going to rain, I pick up my light weight rain coat.

Sometimes, it is no use looking at the weather forecast as the weather can change at any minute here in Cornwall. I can tell you from experience that an umbrella is completely useless in Cornwall as when it rains here, it is usually very windy, so an umbrella is not very good at keeping you dry.

However, don’t get me wrong, it is not always wet in Cornwall. When the sun does grace us with its presence the weather is lovely. I spent a day at Gyllyngvase beach a year and a half ago and it was beautiful and sunny. Even though it might’ve been a little cold, it was a lovely day out.

But Cornwall, despite having unpredictable weather and storms that can crash over shore lines, is a stunning place to be, come rain or shine.

If you enjoyed reading this article, why not take a look at Memories in Cornwall: Then and Now?