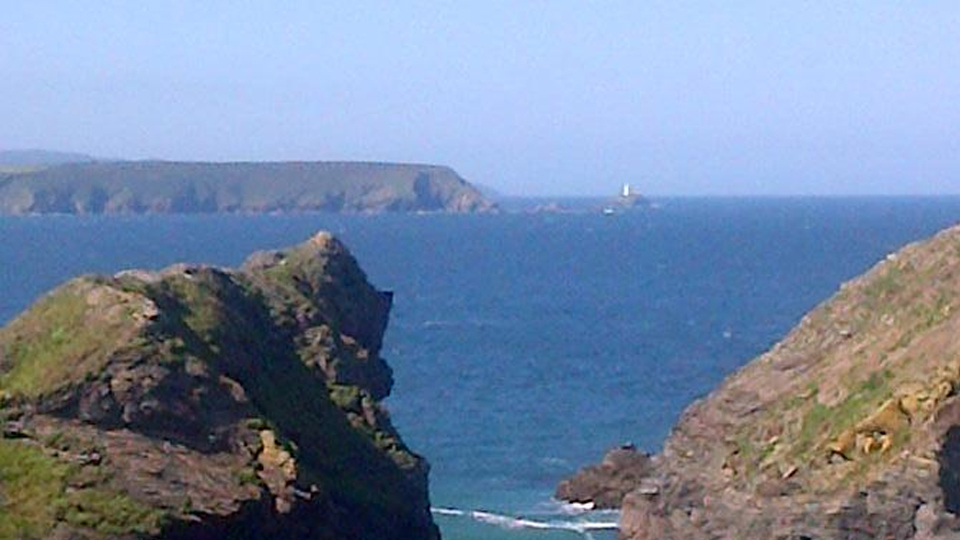 Jackie Harding relates her journey of walking from Hell’s Mouth to Portreath in late August earlier this year.

In this regular series of features she will be mapping these kinds of stories onto the physical landscape of the Cornish coast. Read on to discover more.

On the last morning of August we set off from Hell’s Mouth, rock teeth and jutting cliffs in a silver sea. It was to be a day of contrasts; the biting wind soon gave way to a summery breeze as we followed the slippery path snaking through a purple and gold carpet of heather and gorse.

Two weeks earlier we feasted on sweet wild strawberries and tiny wild raspberries while walking along a disused railway track in Scotland. We picnicked at a beautifully desolate place, the memory of Riccarton Junction Railway station.

There has never been a road to Riccarton; when the railway was closed the town was not just abandoned but completely dismantled. All that remains is a sign and a signal box – and the wild fruit ripening in the Scottish summer. Here on the rugged coast at the opposite end of our island, unripe berries in the shade alternated with deep blood-red gouts in the sunshine. Thistles grew here, too, heady honeysuckle and pink campion. The approach of autumn was suggested not only by blackberries but also by fairy ring champignons and field mushrooms the size of dinner plates, pink gilled and shaggy.

On the horizon loomed the Basset obelisk, a memorial to the hubris of the wealthy landowner who required labouring miners to contribute to its cost; miners who did not receive fixed wages. The miners were “tributers” whose income, as explained with a striking lack of editorial comment in West Briton in 1873, depended almost entirely on the quality of mineral discovered; “If there be no mineral, there is no remuneration.”

Nineteenth century miner and poet, John Harris, emphasises the iniquity of the system in a similarly matter-of-fact tone; “If found, he flourished, if not found, he fell; / Nor fell alone, fell wife and family.”

The Basset family, in contrast, had six pools cut into the rocks in the area around Portreath to facilitate easy sea water swimming whatever the tide. Basset’s Cove commemorates this one family, lords of the manor during the lucrative years of the mining industry until their estates were dissipated on the card table and the mines desolated on the foreign exchanges.

Deadman’s Cove, however, reminds us of the countless un-named miners and fishermen and sailors who lived and worked and died here.

Terraces of gorse and heather led down to the green blue sea. Bees struggled briefly in a building breeze. Gulls rose on the thermals and swallows swooped and soared over pink stubble fields, gleaning the ripening winter wheat, gathering for the long journey ahead.

To our left, ramshackle chicken wire fences were fighting a losing battle to protect regimented rows of spring greens from marauding rabbits. Overhead a Royal Navy helicopter buzzed, and then a bargos. Below, dark rock pools contrasted with white spume in the shadows of the cliffs.

We walked down to the beach where children splashed in the stream and dads flew kites, oblivious to the cove’s story as Cornwall’s most important port. By 1840, seven hundred ships a year were exporting copper ore and importing Welsh coal to work the steam engines in the nearby mines at Scorrier and St Day, connected by the mineral tramway from the harbour to the mines, hauled by earlier generations of working ponies at Portreath.

A network of tunnels, caves and arches led us over sea-washed sand. Like Nancy, in Virginia Woolf’s novel inspired by the lighthouse behind us at Godrevy, we explored the rock pools where “smooth rubber-like sea anemones, […] were stuck like lumps of jelly to the side of the rock.”

As shrimps darted away from our shadows I recalled Woolf’s beautiful description of how her character “cast vast clouds over this tiny world by holding her hand against the sun, and so brought darkness and desolation, like God himself, to millions of ignorant and innocent creatures, and then took her hand away suddenly and let the sun stream down.”  As anemones sucked and surged among pink and green fronds the cold, clear pool became a microcosm, and l too was momentarily “hypnotised” by a sense of “that vastness and this tininess” and, suddenly, was aware of our significance and insignificance.