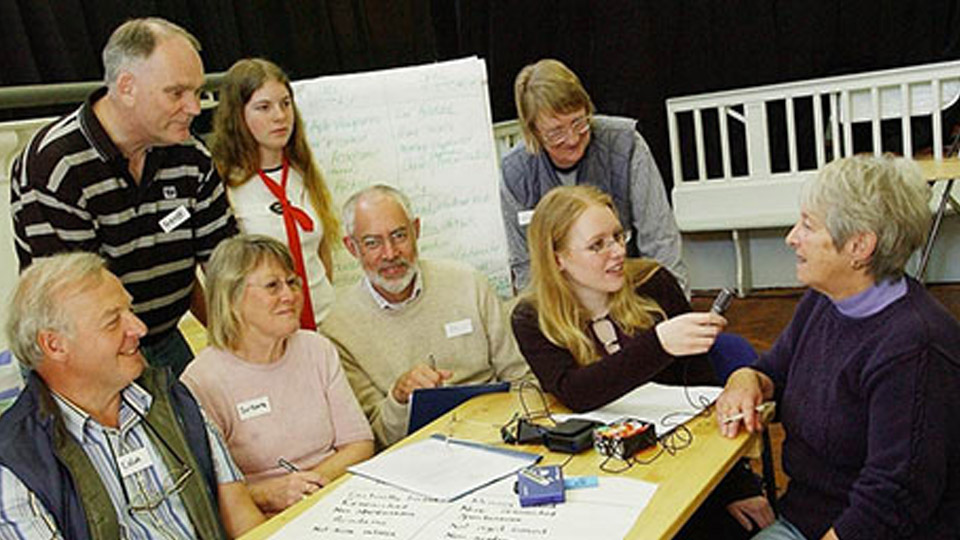 As part of a series of articles based on the varied Archives held across Cornwall, this is the second feature which focuses on the South West Film & Television Archive.

Author Shauna Osborne-Dowle also recounts her time working with the Archive in 2006 with a specific focus on Cornish content.

The South West Film & Television Archive (SWFTA) collection comprises mainly of programme libraries from Westward Television and Television South West, with the addition of a significant number of amateur and professional donated film collections dating back to the early 1900s.

SWFTA was established in 1993 and is an independent registered charity and a non-profit company limited by guarantee. It’s staffed by a full time Archivist, with  professional archive and technical support personnel, along with a strong cohort of volunteers.

SWFTA is also the official film and tape repository for the South West (which holds the largest regional film archive in the country) and is recognised as one of the UK’s most significant screen heritage collections. It is also a member of Film Archives UK and is a key partner with the Plymouth History Centre Project.

So what do they do?

SWFTA supplies footage for public exhibitions and screenings, while also providing H.E workshops; working with film makers and broadcasters, as well as providing copies of news items or programmes from the television collections for members of the public.

The majority of Cornish film content at SWFTA originates from either daily or weekly Cornish news reels for the entire South West region.

These news reels are in original format 16mm film and start from 1961. The reels begin as monochrome and progress to colour a few years later. Any major or local news event may be worth investigating further to those interested, however farming is well covered.

In 2006, I myself pursued work experience with SWFTA during my M.A when studying Television Production at University College Falmouth (now Falmouth University).

I wanted to source film footage to use in my M.A project, ANKOR; a musical collage of Archive footage accompanying one of my own original folk songs. The film was set in the port of Falmouth and portrayed the maritime industries through the ages, from the timeless perspective of a woman waiting for the safe return of her loved one.

You can watch the video here.

As it turned out, my work experience at SWFTA was a mutually beneficial arrangement as my film structure needed lots of separate clips from many different sources, so it would have been a very labour intensive order for the Archive to process. But I was fascinated and only too willing for the hands on experience of sourcing film material for analogue film editing.

Initially, I used the computer search database to research what shipping related records were held for Falmouth and then made notes of all the relevant references and formats.

On my following visits, I sourced the 16mm film cans from the Archive and was then initiated into the use of the Steenbeck editing machine. I very much enjoyed viewing the films, most of which were on the news reels from the 1970s and 1980s. I must have seen so many of them as a child when watching the local news in Cornwall.

Through watching them, I couldn’t help but wonder if the formats used today will last in the same way that these films have. Formats are a real issue for the Archive. It has all the formats that regional television has ever used and, alongside them, all the relevant equipment required for viewing and ultimately for transferring to the digital formats required today.

The equipment collection at SWFTA resembles almost a museum of television. In this way, the Archive does not only serve to document a history of local events as captured in the films themselves, but also keeps a record of how those events were recorded and which technology was used at the time.

Once I had selected my materials, I worked my way through a huge pile of film cans.  On the Steenbeck machine, I set the time code to zero at the beginning of each tape, then jotted down the edit in/out points of the clips that I wanted.

After that, I set about cutting the selected film clips out and created a new film reel of all the segments. This was then put through the telecine machine and played out onto a digital DV tape. The ensemble film reel was then dismantled and the clips were carefully returned to their original film reels.

In 2008 I created another film using SWFTA content for the Networks of Design exhibition in Falmouth. I was working with the students on the M.A in the 20th Century Art & Design course at Falmouth University. These films were sourced by Ann Roberts and also used in my Archive collage, Revisiting Cornwall.

The oldest Cornish footage I know of in the SWFTA collection is the Great Western Railway promotional film from 1910. Eleven minutes in length, it is monochrome and mute, containing images of a steam train on Saltash Bridge; Polperro boats, bathers on Newquay beach with bathing machines, boat trips across the River Fal, Great Western Railway charabancs, St Michael’s Mount, Land’s End and St Ives, plus almost all stops along the Cornish Riviera line.

Then from the 1930s is the private tourist film from the Elizabeth Collins Donated Archive. Lasting 30 minutes, it is monochrome, mute and was shot by H. Carveth. It contains images of Penzance; Jubilee Pool, St Ives and artists, Helston Furry Dance, King Harry Ferry, houses at Veryan, fishing, China Clay and stone quarrying.

This is closely followed by a newspaper promotional film on the opening of Jubilee Pool in Penzance, 1935. It is 2 minutes in length, monochrome and mute. It documents the celebrations of the day, including posing girls, swimming races and a diver.

There is also some colour documentary footage about the China Clay industry in Cornwall. This has sound and is about 30 minutes in duration. It includes images of the white China Clay landscape; horse drawn haulage carts, clay workers using monitors (water jets), workers eating pasties, the processing of the clay and a brass band performing on a bandstand.

SWFTA have also re-mastered a Leach and Hepworth colour film documentary from the 1960s and 1970s. It’s one hour in duration and contains images of Bernard Leach talking about his pottery, as well as the eastern and western potting techniques.

There is also a small collection of privately shot Super 8 films dating from the 1960-70s which are for the most part unsorted, so specific content would therefore be hard to identify. But one could hazard a guess at the personal nature of these family, holiday and personal memories. Time and locations are perhaps of interest here amongst these universal themes.

This is just a little selection of the Cornish content which I have used in my film-making from SWFTA. It’s a subtle negotiation between the research preparation or what you want to look for and what actually exists in the collection itself that might be fit for your purpose.

Ultimately the differing purposes for originally making or creating films need not be influential in your own application of the same content. SWFTA is a fantastic resource for anyone using a little imagination in their own research projects.

Shauna Osborne-Dowle
As well as making films, Shauna is also the Cornish Audio Visual Archive’s Outreach Officer. She makes and directs her own original films and documentaries and has her own production company, Medial Productions.