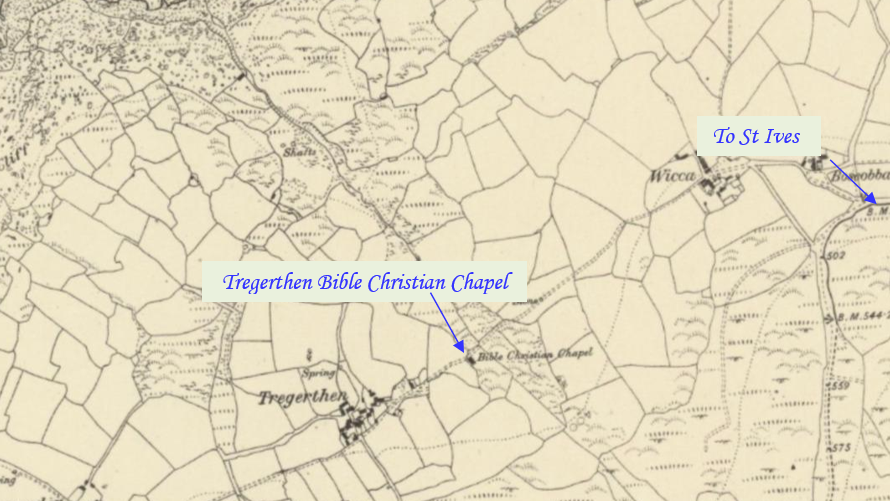 Tregerthen is a farm on what is known as the Zennor ‘Churchway’. The ‘Churchway’ leads from Hellesveor, at the top of St Ives, to Zennor and on to Pendeen, and was supposed to be a coffin path from Church to Church, but this is debatable. ‘Tregerthen’ means ‘rowan-tree farm’, the rowan tree or mountain ash being a significant tree in ancient belief, although there are few, if any, hereabouts today. The steep, boulder strewn hillside rising above Tregerthen is Burn Downs, the site of the Midsummer moot of all the areas witches and where the Witches Rock once stood… ’This information came from Craig Weatherhill’s book: oliverscornwall.co.uk. However, The History of St Ives – John Hobson Matthews says it means ‘the habitation of the enclosure’. This profile of Tregerthen (Tregarthen) Bethesda Bible Christian Chapel, Zennor TR26 3BP has been compiled by Val Thomas, St Ives Old Cornwall Society.

1833: The chapel was recorded as being in existence and having seats for 135. It was built on the boundary between two farms with no other road or lane leading to it, other than the Zennor Churchway.

A Google search reveals Tregerthen Bethesda Wesleyan** Chapel, Zennor. 1833-c1918.      ** It is possible that it was built as a Wesleyan Chapel and subsequently switched to being Bible Christian; either that or the reference to it being Wesleyan is an error.

1841: Counting the census return for Higher Tregerthen and Tregerthen, which is close by, there were 75 people listed. Most men were tin miners or farmers.

1861: The census return shows only 39 people and 4 unoccupied properties. 2 of the men class themselves as butcher/farmers.

1870: In May the “Cornish Telegraph” advertised a ‘Delightful Summer residence, to be let or to be sold – Tregerthen Cottage’.

1883: Kelly’s directory of Cornwall 1883, Zennor says: “there are three chapels for Wesleyans at Trendrine, Porthmere and Church town, and one for Bible Christians at Tregerthen”.

1891: There are only 36 people living there with 6 occupied and 1 unoccupied home.

There is no mining mentioned on the census!

1892: The freehold estates of Tremeader, Tregerthen and Foage were bought at auction by Mr Alexander Berryman who then sold them to Mr J.R. Branwell of Penzance for £2,900. 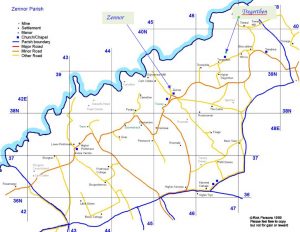 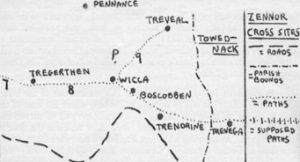 Image: peterpool.co.uk. This map shows the position of the cross at Tregerthen which apparently was removed to be used on the Borlase grave. The base stone with a carved niche in it remains.

1916: D. H. Lawrence rented the ‘Tower House’ at Higher Tregerthen to live in.

*I could find no newspaper articles. 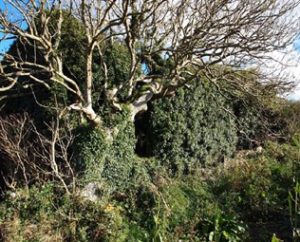 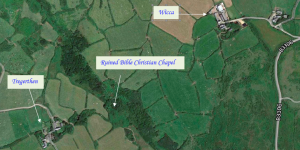 From Google Earth – you can just see the footpath

To access the site of the ruined chapel you need to get onto the ‘Churchway/coffin path’. This can be done at Wicca. You cannot drive any closer to it, and Wicca is off the B3306 road. 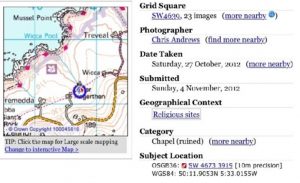 Find my Past for newspaper and census details.