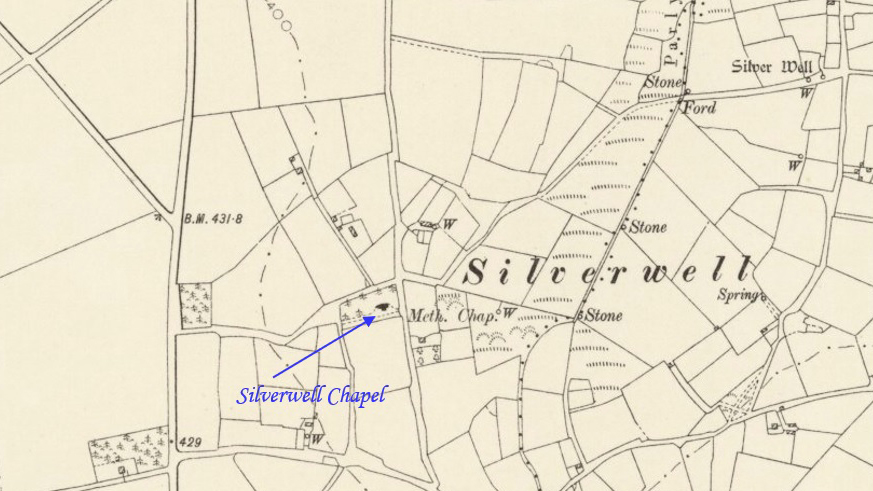 Silverwell is a scattered village in the Parish of St Agnes. The first Wesleyan chapel was built in 1824. This profile has been compiled by Clive Benney & Tony Mansell.

1817: Wesleyan Society active and probably met in a temporary place of worship or in someone’s house. (Bill Morrison)

1840s: Chapel with a capacity for 140 hearers built but our feeling is that the earlier date is probably correct.

1890s: The building was said to be in a dangerous condition and beyond repair. It was demolished and the material sold.

1890s: Form of Application to the Wesleyan Chapel Committee in Manchester sought permission to erect a replacement chapel on the site of the demolished building; it was to have sufficient capacity for 300 people. The application stated that there were 65 regular hearers out of a neighbour population of 200, they were said to be “Farmers and Labourers.” No schoolroom was proposed at the time and the estimated expenditure for the Chapel was £325. The lease was for 99 years at a rent of five shillings (25P) per annum although the Trustees hoped to buy the freehold in due course.

1898 – May: Included a number of chapels for which the freehold had not been purchased; some were subsequently obtained while others remained under lease. (Leasehold Property Return for St Agnes Circuit) At that time the lease expiry date for Silverwell was 1972.

Replacement Chapel built on the site of the old one.

1900: “In aid of the Silverwell Chapel Building Fund a highly successful concert was given in the Goonown Schoolroom on Friday evening…” (Royal Cornwall Gazette – Thursday 25 October 1900)

The construction cost was less than estimated but a dispute with the builder, John Symons and Son, for “extras,” rumbled on for many years. When it was eventually resolved the Society had to pay its own costs which meant that the building of a schoolroom had to wait until more funds could be raised.

Mr. Duke said the action to recover £l40 10s, balance due under the building contract for the erection of Silverwell Wesleyan Chapel, St Agnes, and for £33. 7s 10d. extra to the contract.

The real question was whether the defendant and his co-trustees ought to pay that balance. The contract was made on the 18th of June last year to build the chapel for £310 10s. Some small additions were ordered during progress of the work, in respect of which the plaintiff claimed £33 10s. The defendants had paid £l70. Some carious transactions occurred in the course of the matter. In March of last year the defendant and his co-trustees went to Mr. John Symons, and told him they wanted to build a new chapel. They told him what they proposed to spend, and he drew a sketch. They were pleased with it, and asked him to prepare plans. He also drew out a rough draft of a specification, and some amendments were afterwards made. This action was tried there, and not before an expert, because the trustees alleged, and persisted in alleging, that Mr. Frank Symons made away with the true specification in this case, and had sought to put off upon the trustees a false specification. The plaintiff therefore sought not only to recover the money which said was due to him, but also wanted to clear his character of serious Imputation.

Mr. John Symons was unable to attend, owing to age and infirmity, and his depositions were read. Mr. Frank Symons stated that in 1896 the business of John Symons and Sons, belonging to his father, was assigned to him. His father assisted him for his amusement and for exercise, but had no share in the business. His father prepared plans, but could not write with a pen, owing to an infirmity of his right hand, and used a pencil. His father wrote the specifications in pencil in March 1900 in his own house, and told witness what to put in the ink-written document produced. In May tenders were issued for the erection of the building. Plaintiff sent in a tender of £3l0 10s, and on the I8th June last year signed the contract for the building. Stone was used in place of brick in the orchestra arch, because it was found to be better and stronger. Langdon, the clerk of the works, accused witness in the course of the work of having tampered with the specification. Witness called upon him to withdraw the insinuation, or he would not recognise him on the works. Langdon replied, “I didn’t quite mean that, and if you take exception to it I will withdraw.” At a subsequent interview witness complained to Langdon of the reports that were being circulated about his contract to the effect that he was saving much on the slates used, and that the chapel would come down at one end in consequence of there being a stone arch instead of brick. Langdon said he should not take any notice of reports. Witness replied that the reports were damaging to his character and reputation. In some further conversation Langdon said witness could bring an action against him if he chose, and that he was quite prepared to defend himself. Witness made application for further payment on account of the work, but did not get it. Subsequently, when he handed over the complete building, defendant said they had now a very good chapel. He was sorry there had been any dispute, and wanted it settled up. Other trustees complimented him upon the way he had completed building.

Mr. Foote did not contest the point that the work was good. Mr. Duke said the issue had been narrowed down to this charge, the parties had agreed as the parties had agreed to the amount owing on account of the contract. Mr. Frank Symons. In cross-examination by Mr. Foote, said there had been good deal of country gossip as to his tampering with the specifications. The accusation was made against him on oath that he had done so, but he had not replied to it by affidavit because he did not know that it was required. There were two specifications, one made by his father in pencil, and one by himself in ink, taken down him from his father’s dictation. No alteration except to the arch was ever made to his ink-written specification. He tendered for £40 or £6O less than the other contractors, and got the tender. Every alteration he made was before the contract was signed. Mr. Foote said he agreed. But he suggested that the alterations were made after the tendering, and before the specifications were signed. Plaintif, in re-examination, swore he never wrote anything into the specifications except in the presence of his father and at his father’s suggestion. He made no alterations after his contract was accepted. Plaintiff was in the box five hours. Charles Carveth, foreman of works at the chapel, in the employ of plaintiff, said he worked at the job from the beginning to end. He worked from the specifications. Mr. Langdon. the clerk of the works, had a conversation with the plaintiff as to the specifications, pointing out to him that they provided for a brick arch, and not an arch of stone. Mr. Langdon said the specifications had been tampered with. The plaintiff called upon the clerk of the works to withdraw the charge, which he did. The plaintiff took the specifications, and in presence of the clerk of the works, altered the wording of the arch from brick to stone. Samuel K. Tonkin, J. H. Harris, Thomas Truran, and Walter Durant were called for plaintiff, and the case was adjourned.” (Royal Cornwall Gazette – Thursday 20 June 1901)

The case became very protracted with the accusation of fraud being referred to Bodmin for a Jury to decide. Judgement and costs there was awarded against the plaintiff but the trustees were described by the jury as being unbusinesslike. (West Briton and Cornwall Advertiser – Thursday 23 January 1902)

The settlement of the claim for outstanding payment was eventually dealt with by arbitration. 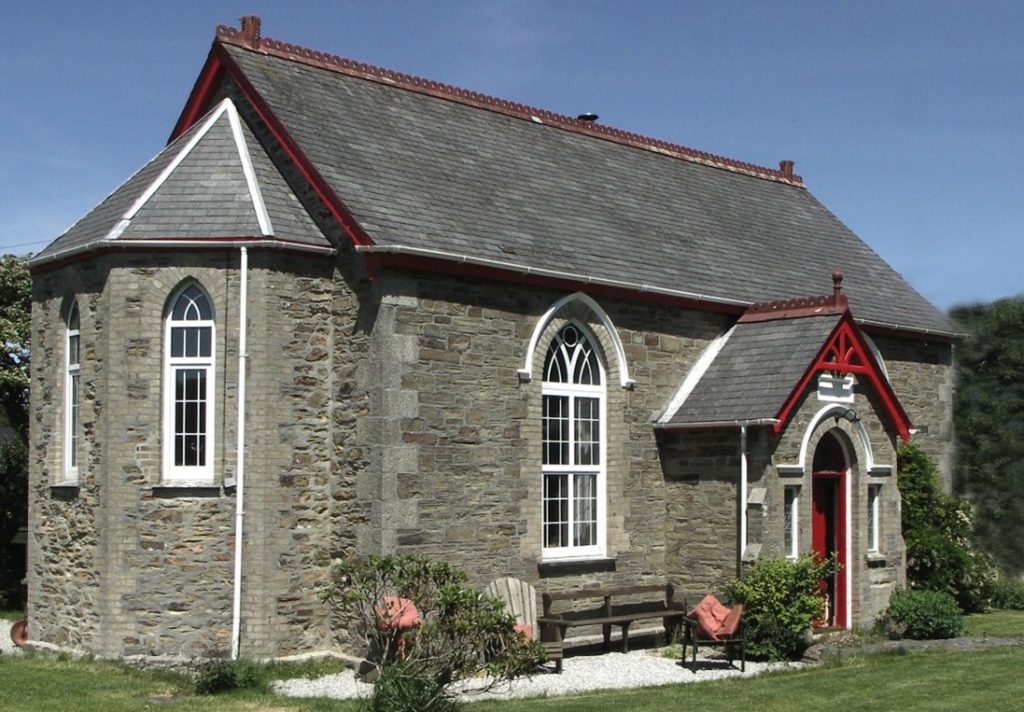 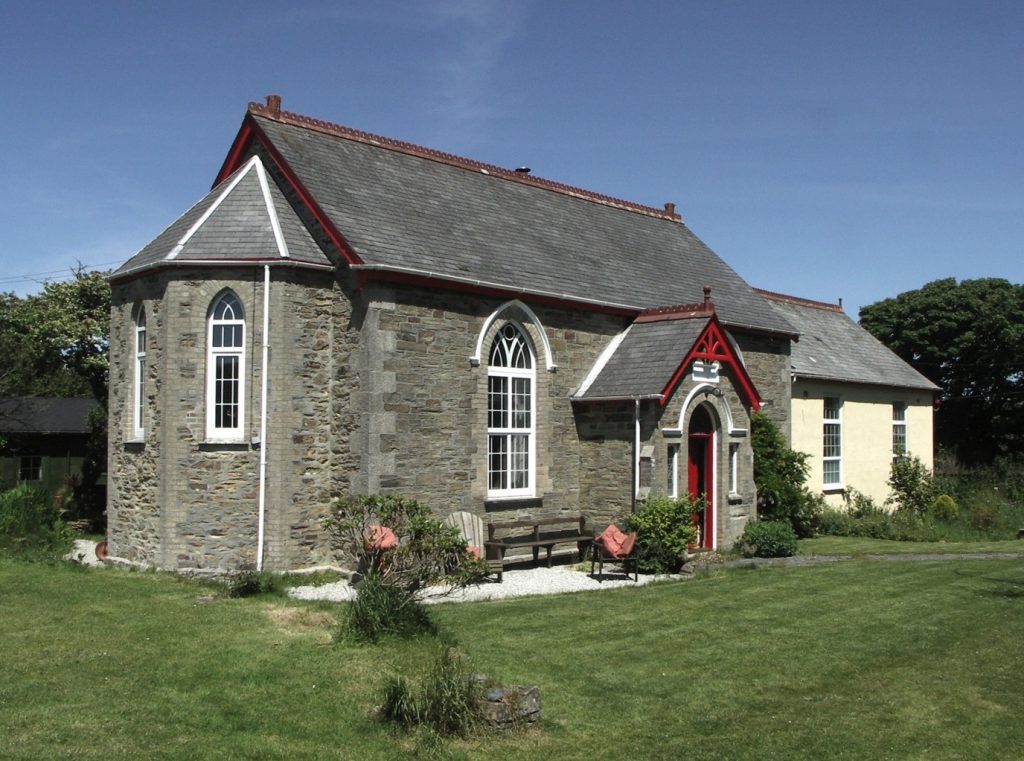 Like so many societies, Silverwell Chapel was built and paid for by the Methodists in the village and there was much consternation when it was discovered that the Methodist Church Model Deed meant that the local Trustees were only acting on behalf of the wider society. Edward Lawrence, a local dairyman, was often heard to complain, “They took it away from us.”

“As Methodist minister in the Perranporth and St Agnes Circuit from 1957 to 1962 I had charge of eight chapels including Silverwell and have fond memories of it. It was a very good building situated in a beautiful setting although somewhat isolated. So isolated, in fact, that one minister from Newquay, appointed to preach there one day, couldn’t find it and had to return home.”

The lane that passes the old Silverwell Chapel, and continues on its way to White Street, was once a main thoroughfare. It was the preferred route, and in ancient times probably the only one, from Mithian to St Peter’s Church for funeral corteges. So, although Silverwell Chapel appears to have been built in a strange location it was once alongside a busy lane. 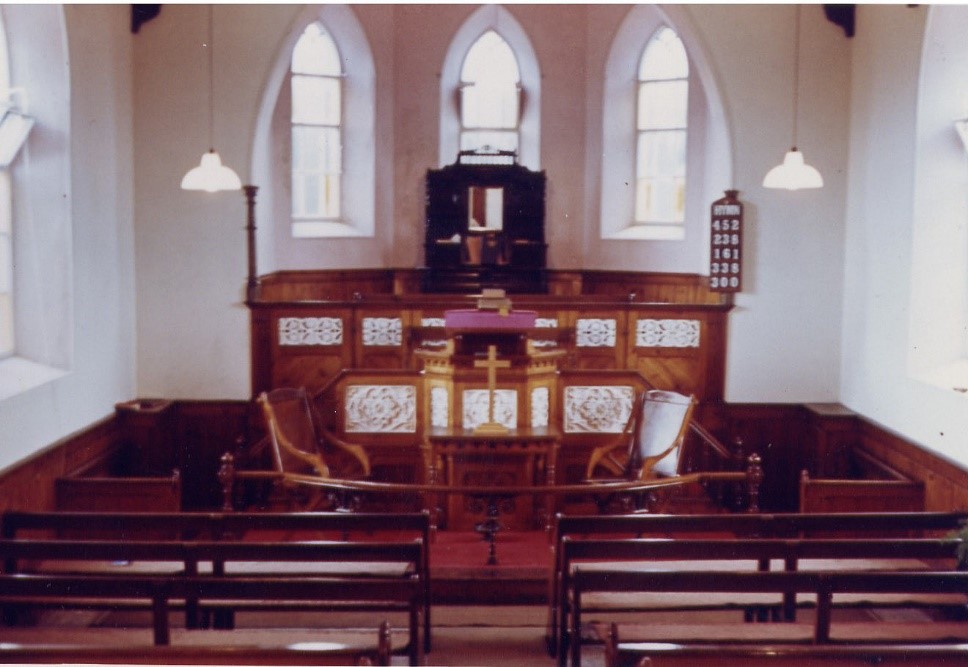 The interior with the pulpit and choir stall which remained in place after it became a dwelling. The cross was made by Douglas Mansell, and disappeared when the chapel closed (Photo: courtesy Tony Mansell)