Blackwater is a village in the parish of St Agnes between Truro and Redruth. The village lies on the old course of the A30 north of the current course which bypasses it. The original denomination of the Methodist chapel was Wesleyan which was built circa 1810. This profile has been compiled by Clive Benney & Tony Mansell.

Anecdotal evidence suggests that the Blackwater Wesleyans first met in a small building attached to the Blacksmith’s Shop, on the site where the Passmore Edwards’ Institute now stands. The smith himself was a member of the Society and may have taken a leading role.

1810s: The first purpose-built chapel built. The building was small with cob walls, thatched roof and was located to the rear of the existing Chapel building. It was basic and simply furnished with forms for the congregation and a desk for the preacher.

1821: The chapel suffered a lightning strike and was destroyed by fire. The congregation had just dispersed and no one was injured but according to Thomas Shaw in his book “Methodism in Blackwater,” one resident said, “Twas no wonder the God Almighty should strike the Chapel weth lightnen, the people were so dead and dull!”

1825: Following the destruction of their little Chapel the people of Blackwater built a replacement. It was a little to the south of the first and, as with so many Cornish chapels of this time, local miners, farm labourers and tradesmen of the congregation provided the labour; “The Cornubian” described them as “Plain men of the village.”

1825: The chapel was formally opened. It had an earth floor and the men sat on one side and the women on the other, on uncomfortable backless forms. Tallow mine candles provided the light with a number of them set in a chandelier. There was no heating so in winter the congregation’s faith must have been severely tested.

1832: Gallery added and seats let to those who could afford them. It seems to have been the preferred place to sit if your pocket could run to it.

1841: New pews with backs were placed in the centre of the ground floor with the few remaining backless ones used by the poor as free seats.

1889: The old Sunday school demolished and a new schoolroom built. 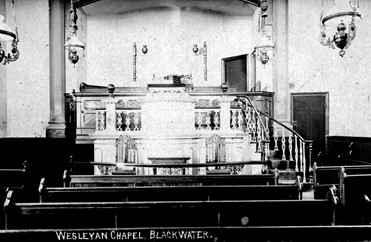 1874: Coach house added to visiting preachers having to use the stabling facilities of local taverns. 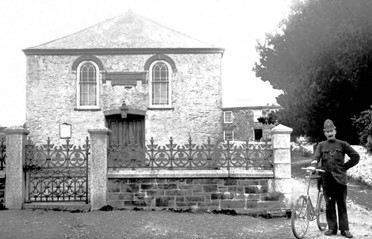 Thomas Shaw described the chapel as very plain with a battle-scarred roof caused by German action in the Second World War.

1985 – October: At auction the building failed to reach the reserve price. It was eventually sold and the building became an office, then an auction room and finally, a dwelling. 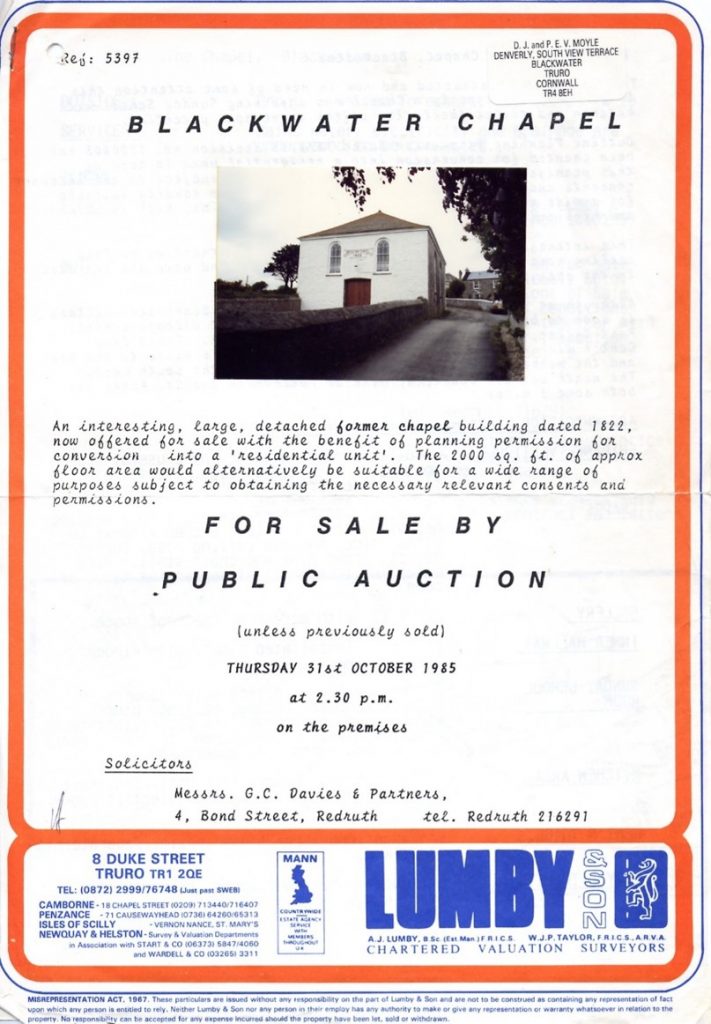