Malcolm Gould writes about the historical impact of mining on a remote area that has been totally deindustrialised with the passage of time.

By the 13th Century the Cornish tin industry was already an important part of the local landscape within the area surrounding Gunwen and Helman Tor. A substantial amount of tin came from streaming, right from medieval times through to the mid 1900s [1]. By the 1700’s Cornwall was producing well in the region of 2,200 tons annually. However, streaming had started to decline and this process continued down to the twentieth century. Breney Common was worked through to the 1960s. Valleys had been turned over in search of the tin and this applied to Breney Common and Redmoor with rich tin-bearing rocks being broken away by erosion from the parent ‘load’ this lay with in the valley floors under a mass amount of overburden. The overburden would have been accumulations of peat and leaf mould over hundreds of years. Once the overburden had been removed water sourced from streams flowed over the tin bearing ground to release the tin ore.

The word ‘Streaming’ is probably where we get the Cornish dialect saying “Streaming leaking wet”!

At the turn of the 20th century Breney moor was being dredged for tin by Redmoor Ltd.  And as a result a blockwork had been established using the washed sand from the dredging operations and this continued as a small business into the 1970s.

Other forms of mining existed within the Gunwen area. To the North West of Gunwen there were underground tin workings at Clanfurze in the Parish of Lanivet in 1856 where the remains of the workings with its chimneys can still be seen [2]. Near Little Gurtla farm had been Ebenezer stream works but after years of ploughing nothing remains. Bodwen was worked for tin underground from 1873 to 1903 while close to Bodwen was Wheal William at Lockengate from 1864 to 1866. There is now nothing above ground to show that tin mining ever existed in these locations, no evidence of the iconic deep mining Cornish beam engines all for the exception of one, which would mean these works would have been adit workings.

Gunwen lies on the eastern side of the Hensbarrow granite mass of the China Clay area. The closest China clay workings are in the Bugle and Rescorla area. Whilst there is no winning of the clay here in this area now, there is still a modern drying complex at Rocks China clay works, that has a rail link down the beautiful Luxulyan valley to Fowey.

Luxulyan is the home to Tregarden quarry where a rare type of granite – Luxulianite – is to be found, noted for its shade of pink crystals of orthoclase and an example may be seen in the Duke of Wellington’s monument at St.Paul’s Cathedral London [3]. The quarry along with other quarries in the area are now flooded and no longer working.

[1] The Royal Cornwall Gazette reported on 16 March 1899 that ‘there were some veritable “streamers” at work each winter on the flanks of Helmen Tor’.

[2] Garry Tregidga noted that in 1851 the ‘number of people engaged in mining in the vicinity of Gunwen was twice the number specifically listed as farmers’.  See Garry Tregidga, Gunwen: A Journey through Time, Friends of Gunwen in association with the Institute of Cornish Studies, 2019, pp. 34-35. 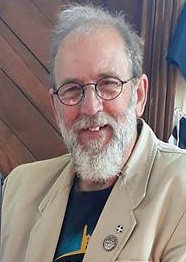 Malcolm Gould is a Cornish Bard (Map pry gwynn). He has worked in the china clay industry at Imerys, formerly English China Clays, for the last 45 years. Having grown up in the clay district it was the thing to do. He became a member of the China Clay History Society not long after its formation, volunteering at the archive and being asked to understudy one of the members, Harry Woodhouse, Cornish Bard, who looked after the film archive. With work commitments it was difficult to attend the archive on weekdays so he now volunteers at Wheal Martyn Museum in meeting and greeting, giving guided tours and driving an old 1934 ERF lorry. He also visits local groups giving clay related talks and showing films from the archive.