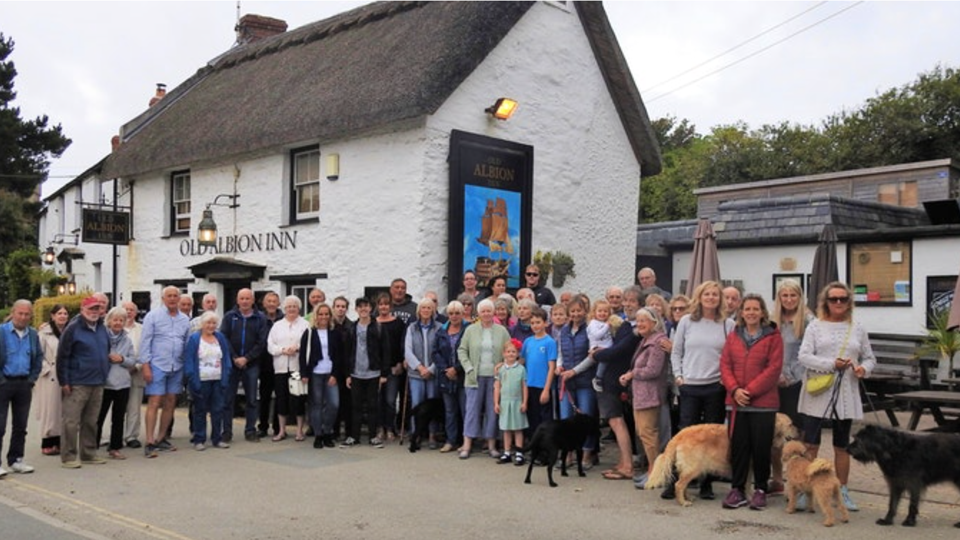 Crantock Parish Council are on a mission to raise funds in order to mount a Judicial Review against Cornwall Council to stop over-development in the village. Read on to learn more and find out how you can support their quest for justice.

After four years of working closely with Cornwall Council, Crantock’s Neighbourhood Development Plan was overwhelmingly approved (86%) by referendum on 24 May 2018. The Plan was pro-development with a 20% increase in housing stock and the delivery of 45 affordable homes, against a current housing register listing of 30.

On 11 June 2018, Cornwall’s Central Sub-Area Planning Committee approved, by a majority of one, a planning application for a rural exception site consisting of 22 houses located on land which was outside of that previously identified for development in the plan. During the determination of the application, the Council’s Case Officer advised the committee members that “Crantock’s current requirement should be treated as 30 despite extant permissions to deliver 45 affordable units which have not yet been ‘built-out’, but which are eminently deliverable”. The Officer also considered that the proposal would offset the affordable housing requirements of the adjoining parishes of Colan and Cubert despite that ‘need’ being non-local to Crantock. Further, it should be noted that Phase 2 of the Goldings development in Colan had already been approved for the delivery of nearly 300 houses.

After the Planning Committee voted to approve a new development in Crantock – which was clearly outside the limits of the approved Neighbourhood Plan – it was decided that we needed to obtain specialist planning advice regarding whether there was a justification for challenging Cornwall Council through the Judicial Review process. A planning consultant and solicitor were selected and a local appeal raised around £3,000 to finance their review of the case. A ‘call to arms’ was circulated in the village, which within three days, resulted in subscriptions to meet the cost of the exercise.

The review concluded that the Parish Council had grounds to challenge Cornwall Council’s decision to approve the planning application. The challenge is based on the failure of the Case Officer to accord the necessary priority to the Neighbourhood Plan and, in particular, to present an accurate account of the affordable housing needs and planned commitment within the Plan.

In order to mount a realistic challenge to the decision, the Parish Council consulted their legal team in order to gauge the potential costs of mounting a Judicial Review. Clearly, the need to employ both solicitors and Counsel are expensive compared to the budget of a small coastal parish of under 500 households. The Parish Council took the decision to exploit crowdfunding as a potential source of raising the necessary “war-chest” and selected the CrowdJustice platform. On their advice, a preliminary target was set at £12,000 which was exceeded within a week, during which most of the networking was focussed on the parish.  An extensive list of potential contacts has been compiled that includes Cornwall and Cornish Associations across the UK and world-wide.

Since deciding to challenge this planning decision we have succeeded in gaining publicity through local television and newspapers. There appears to be continuing interest, but we are yet to make in-roads into the national press.

Our campaign has highlighted a number of key factors:

Crantock Parish Council considers that the Council’s decision is wholly inconsistent with the housing policies in our Neighbourhood Development Plan. The housing policies in our plan are rendered redundant by the decision. The decision is contrary to Government policies on devolution and localism and makes a nonsense of the democratic processes through which the Neighbourhood Plan was created and approved. Further, it sets precedent for unnecessary developments across Cornwall and the rest of England.

The community of Crantock would be grateful for your support in fighting this cause. Please share far and wide on social media in order to raise as much awareness as possible. Donations can be made on the CrowdJustice website by clicking here.

Dr Ben Dobson
Dr Ben Dobson is an associate of the Institute of Cornish Studies, an organisation closely linked with Cornish Story.