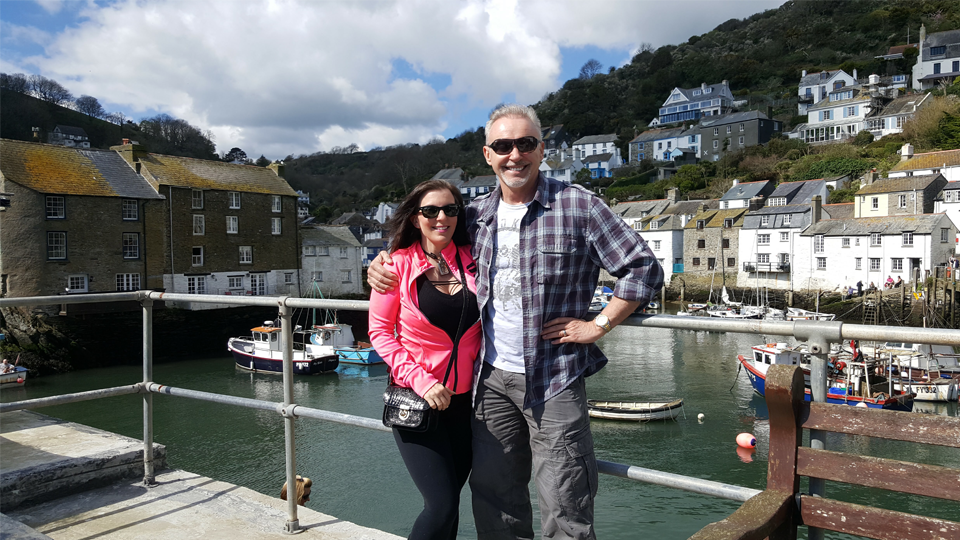 Join Helen Renée Wuorio as she explains the extraordinary role that a small village in Cornwall played in her Alaskan Cornish love story.

My incredible journey, and my Cornish story began in a place called North Pole, Alaska, and yes, there really is a town in Alaska called North Pole.  Back in 1981, my parents decided to move our family from Northern Minnesota, where I was born, to Alaska, ‘The Last Frontier’.  The plan was that after we had moved to Alaska my father was going to follow his dream and become an Ice Road Trucker, just like those portrayed in the popular TV series.  This had been his dream job for a long time, and he eventually decided to take the plunge.

We had been living in Alaska for a couple of years when one day a random traveling salesman came knocking on our door.  My mother was never the type to buy anything from a random “door-to-door” salesman, so you can imagine my surprise when we got home from school and she proudly showed us the beautiful foil prints of a quaint little fishing village.  I remember her saying that even though the salesman had lots of pictures for sale, for some reason she kept being drawn back to one particular picture, and its companion.  As soon as I saw them, I immediately fell in love with both of them.

Having never experienced anything like the quaint images portrayed in the pictures, I simply assumed that the depictions were some sort of fantasy fishing village that were perhaps at best, loosely based on somewhere real.  For the entire time we lived in Alaska, my parents always had both pictures proudly displayed on the walls of our home, and I have no idea why I found both pictures completely fascinating.

Such was the strength of my attraction to them that I would say that I was almost paranormally drawn to them.  I would gaze at them for hours on end while I was lounging around relaxing on the sofa after school, and as I did so, I would often daydream about walking through the beautiful village streets.  I would envision every step, the feel of the uneven cobbled streets under my feet and imagine myself gazing over the harbour wall.  I swear that there were times I would stare at those pictures and I could almost smell the fresh ocean breeze, and the newly budding flowers in the window boxes of the perfect cottages.  The place in those pictures was the special place of my teenage years, in fact it was my secret place.

Many years later when we were all living back in our home state of Minnesota, my parents decided to downsize and move to a smaller house up North.  While they were deciding which things to keep, and which to give away, I seized the opportunity and asked my mother what she was going to do with the ‘fantasy’ fishing village pictures.  Since my mother knew how much I loved them both, she gave them to me and I was absolutely overjoyed.

In 2015 I was living ‘the dream’ of a country girl, and I had my own home in the big city of Minneapolis, Minnesota.  More importantly, and by this time I was on a second date with a handsome gentleman from Manchester, England called Brian Sterling-Vete.  After our first date we already knew that we were strongly attracted to each other, and we had many things in common, so we weren’t going to be short of conversation.

I was training to compete in my first Bikini Fitness Bodybuilding Competition, and since I found out Brian was an acclaimed exercise science expert, I was going to pick his brains about exercise and nutrition.  When he dropped me back at home that evening, I invited him inside to discuss the meal plan I was on, and the vitamins and supplements I was taking.  While I was explaining my supplement regimen, I noticed that Brian had become distracted and had become transfixed by the foil prints on the wall of my “fantasy” fishing village.

I asked him if anything was wrong.  He then turned to me with a look of utter amazement on his face, and asked, ‘Why do you have my fishing village on your wall?’  I was stunned.  He then proceeded to tell me that this was the first place his Mother had taken him on holiday as a small child, and the last place he had taken his Mother on holiday before she passed away.  It was his parents all-time favourite place, and it was his too.  He had been visiting this village on holiday almost every year since he was a small child.  The picture he was staring at, a place that for years I had believed only existed in fantasy in the minds-eye of the artist, was apparently real. It was Polperro, in Cornwall.

I was stunned to find out that the place I loved was in fact real, and Immediately looked at him and said ‘well if that isn’t a sign!  You might as well put a ring on it now!’, while semi-jokingly holding my left hand up, with my wedding ring finger extended.  He immediately said ‘YES!’ and we both laughed.  Six months later we were married, and naturally we visited Polperro for our honeymoon.  In fact, we’ve been on holiday to Polperro multiple times and it still is our favourite place to be!

We even wrote about our Cornwall Story and our light-hearted Anglo-American relationship differences, and other fun anecdotes in a book dedicated to Their Royal Highnesses, The Duke and Duchess of Sussex.  Amazingly, we even received a letter from Her Royal Majesty, The Queen which mentioned our book and her appreciation!  This was another incredible moment for me as a small town American country girl who seems to have discovered that, for her at least, all things seem possible thanks to our magical ‘Cornwall Connection’.  Being American Married to a Brit is available on Amazon https://amzn.to/2sOQ9SS.

If you enjoyed An Alaskan Cornish Love Story, you can find more in our Global Kernow range here. You can also follow Cornish Story on Twitter and Facebook.

Helen Renée Wuorio
Helen was born in Minnesota, USA, spending much of her childhood in Alaska. She has been a Mom and competitive Bikini Fitness Athlete.

Brian Sterling-Vete was born in Manchester, a true Mancunian, he holds a Guinness World Record and is a martial arts instructor and fitness expert. The couple met when their paths crossed one day in Minneapolis.