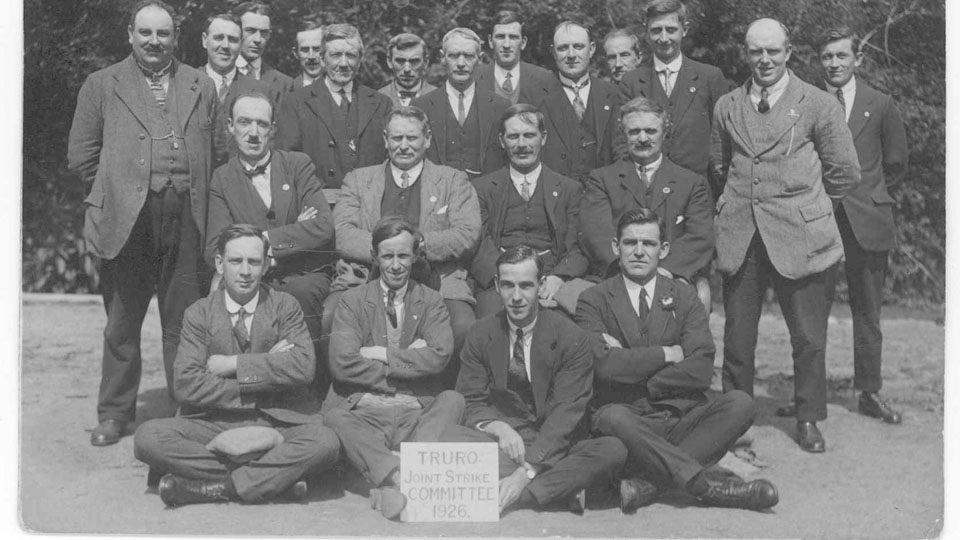 Veronica Kelly returns with the final part of a three-part series looking at the history of the two Great Western Railway housing estates, ‘Little Moscow’ and ‘Moscow Row’ in Cornwall. You can find part 2 here.

The first time Green Close tenants took industrial action as a community was in the 1926 General Strike. Four months after both housing associations were registered. The delayed Chy An Mor was still being completed. However, we know from the records that its first committee met 29 August 1925 and these same committee members were active in the General strike.  For example, George Thomas, who moved into Chy–An–Mor, was a   member of Penzance Strike committee along with the pacifist Dora Russell.  George was also founder member of Penzance Trades Council and would eventually become Chairman of Ludgvan Parish Council (Jenkin 1970). The importance of strike committees should not be underestimated. As a group they were responsible for Communication, feeding centres (if necessary), food, transport, picketing  and the daily issue of strike bulletins (Mowat, 1969:40)

The industrial action of railway workers in 1926 and the demonisation in the press of those who took part in the General Strike would suggest a time when and a reason why the ‘Bolshevik’ label was attached to both estates. Overall, two million trade unionist members were asked by the Trades Union Congress (TUC) to stop work on the 3 May (1926) in defence of the coal miners who had been locked out of their pits by their employers. Railway workers were major players during the General Strike and their solidarity was denounced by both the government and press. The Railway system during the general strike was immobilised throughout the country, GWR stations had posters in all the stations asking’ Whom do you serve’ (Skelley, 1976:34). In Cornwall it was reported that the rail service ‘had come to a complete standstill’ (Cornishman, 5 May 1926, p.4, col:5) and in the Gazette ‘No Trains Of Any Kind’ (Gazette and News, 5 May 1926, p.4, col:2).

‘In 1926, it was the railwaymen who were the main body of strikers. They maintained a very effective solidarity, which was… remarkable because they were …a small minority of the total Cornish population and subjected to tremendous obloquy’ (Jenkin, 1970).

The context, within which the General Strike occurred, was one in which the Baldwin government had returned to the gold standard and devalued the pound sterling. Employers in exporting countries were faced with a need to cut costs, which led to a cut in wages by ten per cent. This had already caused a major dispute in 1925 and the situation had changed little between July 1925 and May 1926 when the coal miners’ lockout began (Mowat, 1969:6). The TUC agreed to support the miners and when negotiations were broken off on 3 May the General strike began.

There had been a threats of General Strikes since 1918. That threat became greater after the 1921 miners strike when three of the county’s biggest unions united under a ‘Triple Alliance agreement’. The possibility of an alliance had haunted the minds of British Statesmen since Armistice Day (1919) (Skelley, 1976:34). Alarmed by this threat, the government had made contingency plans, such as the country being divided into twelve regional divisions responsible for emergency food supplies and public law and order. It also used constitutional issues as propaganda to malign the reputations of trade unions leaders and members.

‘Sooner or later, this question has to be fought out by the people of the land. Is England to be governed by Parliament or by a handful of trade unions?’ (Laybourn, 1990:33).

The TUC had hoped the Samuel Commission would be able to offer a compromise, which was agreeable to both unions and mine owners. There had never been any plot to bring down the government (Laybourn, 1990:121). Many in the country however, ‘saw the hand of Moscow behind the struggle and feared a revolution was being planned’ (Taylor, 2006). This aroused even stronger emotion from the press towards trade unions, which was already tense and hostile. Speeches from the Conservative and Liberal political parties denouncing trade unions were regularly reported in national papers.

In the four months leading up to the Strike, The Royal Cornwall Gazette circulated headlines such as ‘Communist Flirting’ (RCG, 28 January 1926, p.2, col:4) and ‘Constitution At Stake’ (RCG, 29 April 1926, p2, col:4). In the same paper a report speech from the Conservative Primrose League warns Newquay members about tolerating Socialism, including its foul ally Bolshevism, which was trying to undermine and destroy the Empire. Two other headlines call Socialism a ‘Virus’ and ‘The Common Enemy’ (WB, 29 April 1926, p2, col:4). This partisan coverage by the press portrayed labour supporters and trade unionists as communist sympathisers. It would plant in the publics’ consciousness the idea that all trade unionists were militants.

‘It is remarkable how frequently the critics of the [areas called] Little Moscow used pathological metaphors of virus and inoculation’ (Macintyre, 1999:15).

Therefore, it is not surprising that Green Lane and Chy-An-Mor estates were labelled Bolshevik communities.  Despite newspaper criticism, there was some sympathy in Cornwall for strikers. Three of those interviewed remember the Green Lane strike committee successfully selling flags and miniature miners lamps for 6d each from a cart outside the Independent Labour offices (IPL) in Truro (Allen, B. Interview ), Boynes, M.  Interview 11 April 2006), (Bowden, V. 27 July 2005). Paradoxically, while sympathetically collecting for the miners’ fund all the interviewees remembered the financial hardships that their own families endured.

‘My father was on the local strike committee. It was a hard time during the strike, there was no strike money’ (Sloman, D. Interview 2 June 2005).

This hardship could also be attributed to the enforced reduced pay and reports that an estimated 65 men were still not reinstated as late as 26 May, two weeks after the strike had ended. Those who were reinstated looked after those still unemployed (Gazette and News 26 May 1926, p.5, col:6).

During the nine-day strike, very few newspapers appeared. There were however, some emergency editions in attenuated form, which reported updates of the situation. Some speeches were also published, such as the one given by the Truro Labour Party Prospective Parliamentary Candidate, F. J. Hopkins. In his speech, Hopkins asked for sober and restrained language to be observed throughout the strike. He also expressed admiration for the railwaymen who had come out in support of the miners. All strikers were invited to a special service of intercession in the cathedral on 6 May (RCG, 5 May 1926, p.1, col:2). The speech given by Sir Montague Rogers, President of Camborne Unionists, is in direct contrast to that of Hopkins. Rogers accused the strikers of allowing the communists, aided by Moscow, to engineer the strike (RCG 10 May 1926, p.3, col:4).

The strike ended on the 12 May, the day after the ship builders and engineers officially joined the strike. Herbert Smith acting on behalf of the mining executive rejected the Samuel Memorandum opposing the TUC decision to accept it. According to W. Milne-Bailey (1934:60), after nine days the general council reached the unanimous conclusion that ‘the government could hold longer than the workers’. Moreover, the danger of civil strife grew as long as the strike continued. J.H.Thomas, secretary of the National union of Railwaymen, had no alternative but to order his members back to work. This decision meant defeat for all those on strike. In Cornwall, solidarity amongst the railwaymen had been remarkable (Jenkin, 1970). It was the solidarity and loyalty to the miners that prompted Milne-Bailey (1934:61) to call the strike a ‘brilliant failure’.

Oral history testimony from ‘Little Moscow’ and ‘Moscow Row’ tenants about the actual strike is scarce. Most of those interviewed were children at the time and recall their parent’s hardships. We know from union records and newspaper reports that the railwaymen on ‘receipt of the strike being over’ marched back to work singing hymns under their union banners (RCG, 19 May 1926, p.2, col:3). We also know that many railway workers were victimised and that wages were reduced by ten per cent (Tucket, 1976:309). George Thomas, in an interview with Albert Jenkin (1970), remembered how ‘he and other Penzance railwaymen marched in procession back to work proudly under their union banner’ (WB. 17 May 1926, p.3, col:1).

‘The Striking stationmaster…is singled out for individual consideration and not even the support of other men can save him from ignominious exile’ (Morris,1976:356).

Because anti–trade union newspaper editorials generally became even more vitriolic after union leaders called off the strike it prompted the Bishop of Truro, Dr. Frere, to write to the Gazette that the ‘press was now largely an instrument of the people who owned it’ (RCG. 9 June 1926, p.4, col:5). More outspoken was the Rev. Jack Bucknall of Delabole who wrote that the Church England Bishops, during the strike, had been ‘gagged’ (RCG. 9 June 1926, p.4, col:1). Controversial, headlines however, and political hostility towards the strikers did not stop ‘large crowds’ attending  and ‘warmly greeting’ the miners secretary, A.J. Cook, on his ‘fund raising tour’ of Cornwall in June 1926 (RCG. 16 June 1926, p.3, col:5-6).

It is only fair here to mention that fundraising took place all over Cornwall. In some areas, they became huge rallies.

‘Cornwall Women’s Demonstration,…headed by Falmouth Town Silver Band…hundreds of people from all over …[gathered to hear] Miss Susan Lawrence MP…her speech was greatly enjoyed…At night another great gathering was held and addressed by Miss Lawrence and Mr Donovan of the Transport and General workers Union’ (The Labour Woman. 1 July 1926:109).

To many commentators, the General Strike was a failure for strikers. However, for the ordinary trade unionist, it was a success. Their union leaders capitulated. ‘Their unconditional surrender had amounted to a terrible betrayal of the working class’ (Taylor, 2006). As a result, in the immediate aftermath, trade union membership fell and membership in the Communist Party rose (Weinbren, 1997:79). There is no evidence of this trend on our two housing estates. They remained loyal to their trade unions and socialist beliefs despite the defeat and continuing ideological criticism  from the press and other sections of society. I suggest that it is this criticism that influenced the original labelling of both communities as ‘Little Moscow and ‘Moscow Row’. ‘A term thought to have been coined in the 1920s and aimed at those thought to be militant, in an effort to belittle them’ (Macintyre, 1999:13).

From the oral testimony, we heard the ‘Bolshevik’ label of the communities grew out of a close association with the railway unions and newly emerging Labour Party. The shared expectations of promoting Socialism on both estates gave many a lifetime of commitment to serving their own immediate community and the wider community at large.  Their shared experience of unions and politics created what Daniel Weinbren (1997:76) calls a ‘sense of the personal in the local, embodied first in the family and second in the neighbourhood’. There were differences between the two communities however, which deserves further investigation. To conclude I leave the last words to one of my interviewees, Vera Bowden, ‘Little Moscow’ brought us together. ‘We were an example of solidarity’.

I hope you have enjoyed reading the article, you can find the latest in our series on Cornish pubs and Hostelries – Public Houses and Taverns of Truro here.

Veronica Kelly
Veronica Kelly joined CAVA in 2004 and worked across various projects, notably the Cornish Labour Movement Project in 2005 presided over by Tony Benn. This article is a tribute to the men and women connected to Cornwall’s railway industry.