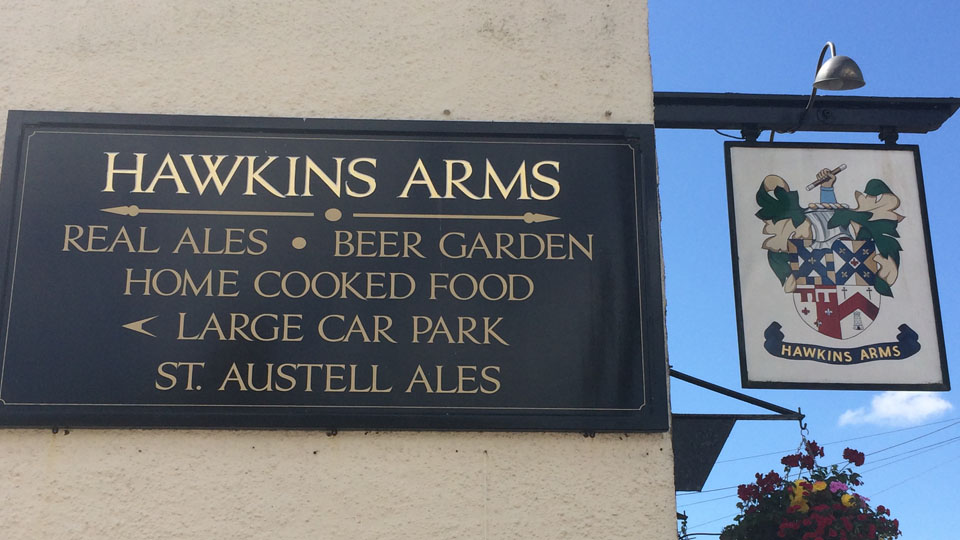 In the first of a series covering the history of Cornish pubs and ale houses, join Tom Kennedy as he reveals a brief history of the Hawkins Arms in Probus and how much (or how little) the pub has changed since it was first built.

The purpose of this script, in principle, is to look at how and why the “Hawkins Arms Probus” originally came to be. The history of the establishment is well documented from the time it was purchased from “Trewithen Estate” by St Austell Brewery in 1910, details of which are to be found in the brewery archive should a reader wish to garner further information relating to the pub from that period. The first record of a pub/inn on the current site is listed in the will of Sir Christopher Hawkins (29 May 1758 – 6 April 1829) of “Trewithen Manor” in Probus. In deeds the original name of the property (“The Queens”) was held in said deed at the time of its acquisition by Trewithen and, although the name of the property changed during the life time of owner (to the Hawkins Arms), it remained titled in the deed with its original name.

Villages such as Probus over centuries attracted individuals and business from outside its boundaries and thus had a far better chance of surviving harsh times than domains which relied solely on their parochial inhabitants for its income. As a consequence of a broad picture philosophy the stable core population and allied wealth of a village such as Probus would not diminish in general (over centuries) except in times of death due to pestilence. From the time of the Restoration of Charles II (1660–1685) until the advent of temperance and the firm establishment of Methodism in the county, circa 1850, during that period the Inns and allied trades did comparatively well, free of ecclesiastical related constraints thus they prospered unhindered. As a result, a public house became a community focal point, a place to conduct business as well as being utilised as a social and recreational outlet. It was near the latter end of that period that the Hawkins Arms attained its present day title.

The United Kingdom Census of 1841 recorded the occupants of every UK household on the night of 6 June, 1841 which was described as the “first modern census” in that it was the first to record information about every member of the household and because it was administered as a single event, under central control, rather than being devolved to a local level.

The census recorded that the landlord of the Hawkins Arms was registered as one Amos Weekes Jr. His predecessor at the Hawkins is identifiable as his Father Amos Weekes who in 1826 was in a surrender and admission of tenant for a house (“The Kings” next to the church yard) at the home of said Amos Weekes senior, the Hawkins Arms. The implication is Weekes senior gave up the “Kings Arms” in favour of the Hawkins. The question is why? Conjecture in part now has a role to play in this potted history yet such speculation is based on actualities. At this juncture it is necessary to look at where the pub acquired its name from and how it came about.

It was common practice in the 18th Century for the landed gentry to purchase as many trading outlets within their domain as was viable and in the case of the purchase of an inn or hostelry it was also common practice that they would stamp their mark on such establishments by displaying the family name and shield on a sign outside the house, as did Sir Christopher Hawkins.

A hostelry at Probus was not the only one to be labelled Hawkins in the county, given Sir Christopher Hawkins held vast tracts of land in Cornwall which he administered from his estate at Trewithen in Probus. Sir Christopher inherited considerable estates from his father, but assiduously purchased additional lands and properties, eventually claiming that he could “ride from one side of Cornwall to the other without setting a hoof on another man’s soil.” And wherever he took over an Inn so his name would appear above the door as in Zelah, Pentewan, Relubus, St Hillary, Newlan East, Cubert and, of course, Probus.

However, like all men of his ilk, it was not just vanity that led him to purchase businesses; he expected to charge a good price to any tenant who wished to trade from his property and in addition to this, ale houses and such could not function without a supply of good quality supplies from a “maltster.” An art and skill fundamental to the brewing processes and Hawkins employed one or more maltster to supply his tenants for a consideration.

A suitable brewing/malt house for ales and the distillation of Cornish Whisky probably went along with the tenancy. The Hawkins Arm’s 18th/19th century malt house is noted on the Probus tithe map 1840 (g1062). Its location today is off Ladock Road on the street facing the playing field steps. Mr Weekes must have deemed the Hawkins Arms to be a complete package, especially if by studying the structure of the current pub this writer postulates it was newly built (circa 1790) on the site of the Queens.

In addition, a well to the rear of the Hawkins, now occupied by the smoking area, would provide ample supplies of water for both domestic, equine and coach valeting requirements. It was probably for those collective reasons that Weekes Snr moved from the Kings. Sir Christopher Hawkins must have considered the viability of the site of the prospective Hawkins Arms prior to committing himself to any expense. The population of the village in respect of its wealth by the trading done by the village outside its domain was a consideration. Ample grounds to the rear of the Hawkins would allow farriers and coachmen to go about their business and the presence of a blacksmith shop some few hundred yards from the Hawkins was another plus point. The blacksmith’s shop was situated just past the village square facing the Helland, Ladock road on the right hand corner of which stood the site of the “Bell Inn” (1808) to be renamed the “Cornish Mount” (H.L.D), as can be identified by its tall chimney in the illustration plate.

The Hawkins was in the perfect location on the village’s main thorough fare. The old coaches followed a route out of Truro which hauled up “Michell Hill” turning left at its top before passing the present day crematoria, then turning right at the Ladock valley sign emerged by Ladock Church. The option for the coach was then to carry on toward Mitchell and the “London Inn or go straight across onto “Grampound Road” and the “St Austell-Roseland” link or, alternatively, turn right onto the “Heland” road and what is now “Chapel Street, Probus” where a coach would to come out facing Probus blacksmith’s shop. Traffic heading to “Truro” from St Austell and The Roseland would pass the Hawkins doors, as the descent down “Truck Hill “out of the village was far less arduous for the horses pulling the coaches and the route to Ladock was far less circuitous going in the direction of Truro. In a nut shell, the Hawkins was situated at the gateway to Roseland and on the only viable route between St Austell, Truro and beyond in both cases.

This highway ancient road and pathway connectivity would explain how a monastery at “Golden”, Probus was founded in pre-Norman times. The present Church at Probus’s construction began during the 14th century with the tower completed circa 1535 and, last but not least, fairs founded at Probus in 1321. These elements served to bring people into the village from surrounding areas to trade. This pattern was to be continued until the Hawkins family became ensconced at Trewithen.

An additional attraction also pulled people into Probus. A record of County wrestling matches show that Probus was a renowned centre for such sport and its gatherings of thousands of spectators. Yet there were occasional downsides; H.L. Douche informs that in 1757, due to intense poverty in the communities across the county, the event would be cancelled at Probus in June of that year, the reason stated being that for the lack of funds attendance would not warrant the expense of holding the event. Yet it was not long before the Status quo was restored. One William White interestingly gave a good description of wrestling and “the taverns at their worst” during a visit to Probus in the 19th century (H. L.D).

“White informes. A little excitement was apparent in the village (Probus); expectant loungers hung about, heads projected from open windows; a stall covered with lolly pops and nuts stood at the door of each of two taverns (one of which was the Hawkins), between which a hasty messenger came and went. It was as one of the loungers that told me it was ‘wrostling day’ the sport having begun the day before but having been interrupted by a fierce dispute was to be resumed at two o’ clock and, if possible, settled […] there was an hour to wait […] so I strolled around the church and then peeped at the rival parties in the taverns, where they sat in noisy talk, drinking bad beer and worse cider and as I thought, in anything but the generous mood supposed to precede a fine manly exercise (wrestling). At the first note of the drum and clarinet I walked to a field where a ring was formed […] where each tavern had an improvised tap, with casks of ale, bottles of spirits […]. A considerable number of spectators were already seated on the forms round the ring. And a few lying in drunken sleep in the ring […] the wrestling at Probus seemed to me to be more a speculation of two tavern keepers than the emulous recreation of a Parish.”

Thus the answer to the question as to how the Hawkins Arms came to be and how matters have evolved or not, has hopefully been answered.

Next month Cornish Story will be looking at the history of The White Hart pub in St Austell. Want to know when it’s published? Look out for an update on our Twitter page.