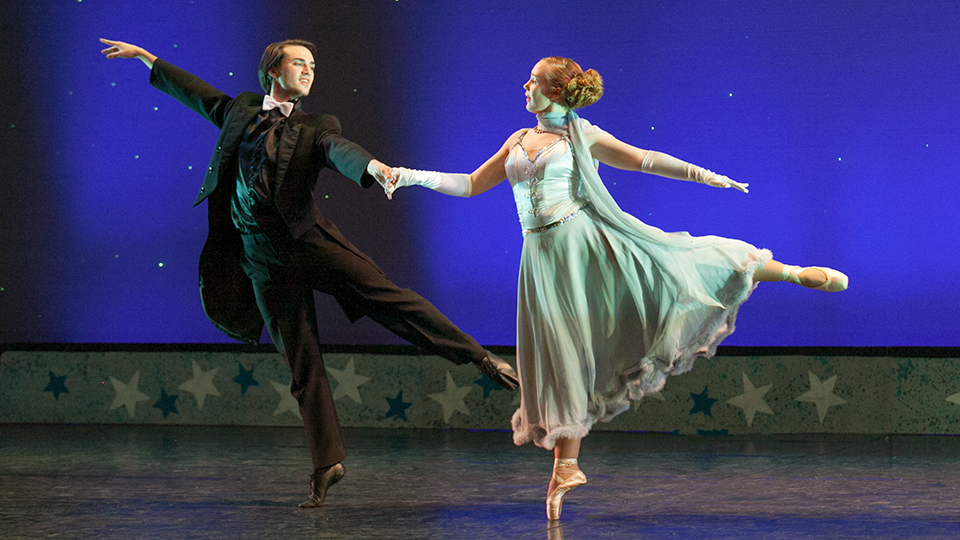 On the 11th March, I was treated to an evening of ballet at the Hall for Cornwall with Duchy Ballet’s much anticipated performance of The Snow Queen and Stepping Out to Gershwin.

Ballet is something very close to my heart and although I have seen many of the classics, including The Nutcracker, Giselle and Swan Lake, I had never seen The Snow Queen, so I was rather excited.

The moment I sat in my seat, with a great central view of the stage, the lights dimmed and the curtain went up. The audience was immediately introduced to the cold world of the feared Snow Queen, performed by Laurie Miners, donning a bright white and glittery dress and an angular crown while the younger dancers shivered in their furry coats.

The Snow Queen follows the tale of two friends Kai and Gerda. When Kai is consumed by the Snow Queen’s power and taken to her icy palace, Gerda ventures by night and day through woodlands and enchanted gardens in search of her lost friend, encountering many magical creatures and characters along the way.

What I loved about the performance was the beautiful mix of the icy scenes of winter with the warmer, earthier and fiery tones of spring and summer. The set, costume design and choreography beautifully complimented and captured the different seasons. The fire cave scene donned black dresses with red, glittery material that impressively mimicked the appearance of flickering flames when the dancers swayed. The stage was completely drowned in a deep red light, while the scenes in the Snow Queen’s icy palace were bathed in a blue hue.

I particularly enjoyed the Enchanted Garden with the beautiful, calming harp music and the butterfly dancers flapping their weightless wings, almost floating across the stage. It was truly magical to watch.

After a short interval it was time for the second performance of the night: Stepping Out to Gershwin. A musical theatre performance inspired by American composer, George Gershwin, and his 1930s melodies.

This performance brought a more lively tone to the stage with tap, singing, and of course ballet. There were a number of glitzy scenes in make-up rooms and jazz bars, with one or two divas for good measure and stunning vocals from Farran Roland and Stephanie Johnson, as well as one of Duchy Ballet’s younger performers Emma Clarke. I loved the part where the music cut off for a moment so you could hear the tapping of the dancers’ shoes!

Part of the unique experience Duchy Ballet offered was the two very different styles in one night, transporting viewers to the icy world of The Snow Queen and the glamourous scene of 1930s America. And there was certainly no lacking in quality or stamina. All of the dancers and singers, both young and old, were on point from beginning to end!

Both performances received a well-deserved round of applause and cheers from the audience.

I cannot wait to see what Duchy Ballet bring to the Hall For Cornwall next year!

If you would like to sponsor Duchy Ballet you can get in touch with the Friends of Duchy Ballet co-ordinator: Friends@duchyballet.co.uk

Emma Gibbs
Emma Gibbs is a student graduating from Falmouth University this year. As a novice gig rower, she spends every weekend on the water and in her spare time enjoys reading and exploring the hidden treasures that Cornwall has to offer.