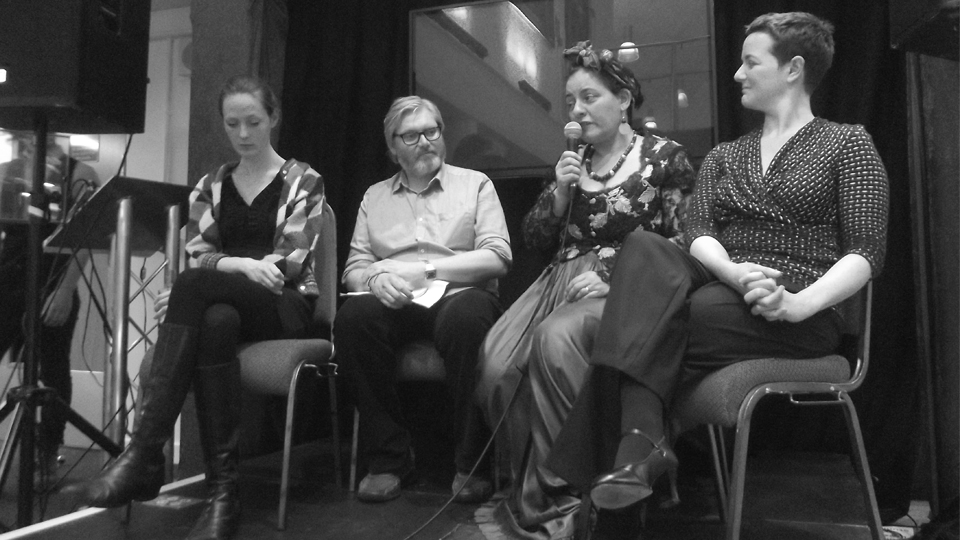 A poetry event hosted by Sun Beats was a storming success earlier in January this year at Falmouth University. Archie Wilson explains more about the evening and what it was like to be there.

Ecopoetry is a term far easier to explain through reading than trying to describe it. It questions our position in nature, what nature is, and how our impact changes nature. It can be political, responding to the relentless drive of industrialisation and globalisation. It can also be internally focused, on personal relationships and interpretations of nature. Ecopoetry can question itself, whether the work exists outside of nature or as an interior response.

In late January, Sun Beats hosted an evening of poetry at Falmouth University to explore and try to explain what Ecopoetry means and how it can be expressed.

Organised by two third year Creative Writing students, Sun Beats 1 was the first in a series of poetry events inspired by Ecopoetry. The poets themselves all had very different journeys to Falmouth, crossing seas, getting a train from London, and returning from as far away as the Arctic Circle.

The two students in charge of the evening, Anna Cathenka and Sarah Cave, explained the inspiration for Sun Beats came from a John Burnside quote: ‘Nature isn’t out there, its continuous within us.’

The suggestion that poetry is not external but continuous is a chief feature of Ecopoetry. Burnside, a professor of Creative Writing at St. Andrews University, is a poet strongly related to the Ecopoetry movement and a key influence for its development today.

The first poet to read was Nancy Campbell. She first described some of her experiences of recent writing residencies at research centres within the Arctic Circle. Then Nancy moved on to reading some of the work inspired by her time there.

Her poems reflected the vast cold of the region evoking an isolation and delicacy. Her soft reading voice added to the experience, capturing the feeling of the landscape and its people. The room was held captivated to hear her reading unique poems of a place so few have visited. They had an intimate personality but also a mysticism of a land where legends still exist and a frozen history that cannot die. Nancy’s Disko Bay is her debut collection of poetry from her time in Greenland.

After Nancy, in bubbling contrast, Sophie Herxheimer leapt onto the stage. Having travelled from London, Sophie brought with her the energy of the cityscape. In her poems she took multiple personas, including her Jewish grandmother first arriving in London.

As an artist as well as a poet, Sophie’s poems are as visual as they are literary. Her poems were written on paper as big as her character and stood out in the performance. Sophie read from her book, The Listening Forest, inspired by a residency that left her alone in a wood for a month to just write and paint. The book stretched out to 30 metres long and was lavish to see with painted forest scenes to compliment the words.

Next was Isabel Galleymore, reading from her pamphlet, Dazzle Ship. Inspired by the Cornish coast, she brought the mood back down with poems about cockles and toads using language informed by the natural word. As well as publishing her own work, Isabel is co-editor of The Clearing, an online magazine that focuses on place and nature writing.

Towards the end of her set Isabel trialled some new poems. These took a more expansive theme, covering global warming, which Isabel admitted she was hesitant to explore given the strong, polar opinions and blaming language the topic inspires. Her poems were a fresh take on the issue, taking a step back from our personal guilt, instead gazing at the effects and the impact.

The last poet to read was Nathan Thompson. Nathan’s poems explored personal interaction, using natural imagery as expression to the themes. He explored philosophical ideas from an individual, experienced point of view.

His words were hesitant reflecting the difficulty of the topics her explored. Nathan divides his time between Jersey and the UK, has a PhD from the University of Salford as well as having published many pamphlets and books. He has recently released a chapbook co-written with Falmouth lecturer, Rupert Loydell, called First and Last.

Afterwards, all the poets took the stage for a question and answer session. The audience was made up of a fairly even mix of university students and local people. Nancy spoke about how the arctic landscape had surprised her by bringing out a human nature to writing, focusing on people of the area, exploring their daily lives and the tools they use.

After a question for Isabel about the difficulty of writing about climate change, she answered with the concept that is difficult to grasp in scale.

All the poets talked about how they approach writing, from disorganised notebooks to rigidly set times of the week devoted to the task. This was followed by a question on how to know when a poem is finished. Sophie described how reading a poem to an audience leads to seeing it in a new light and how stepping away from the poem, with time, helps to finalise them. Nathan felt poems were never finished, even when published, but were constantly evolving.

After this, the mic was opened to the floor and students read their own poetry to the audience. As well as Sun Beats, Anna Cathenka and Sarah Cave also hosted a night of sound poetry called Sausagefish late last month at The Front in Falmouth town and regularly contribute to poetry events.

Following the success of the previous event, they both hope to host another Sun Beats session soon after spring.

Cornish Story will keep you posted for further details!