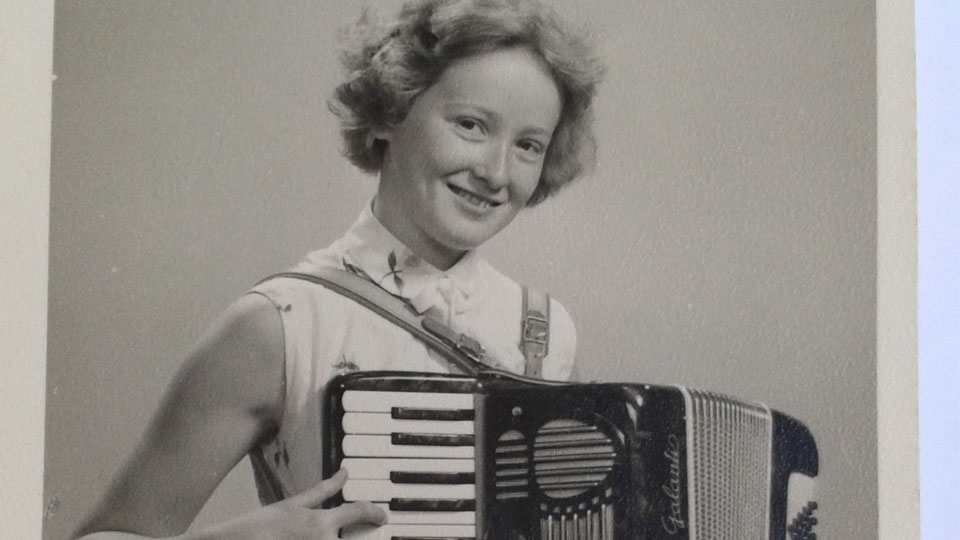 This is the first of a series of articles based on oral history interviews from people around Cornwall.

Eileen Budge (pictured above), who currently lives in St Stephens, was a member of Cornish amateur band The Accordionettes, who played during the 1950s. Here, she recounts the fond memories during her teenage years with the band. The picture above was taken when she was just fifteen.

Q: When did you start playing the accordion?

A: I started playing the accordion when I was about twelve. Where I was living at the time, one of our neighbours had an insurance man round and he was an accordion player. He was the one who taught me and wanted to form an accordion band. So then he started teaching me and a group of others. When the group was set up we all ordered brand new accordions. I played an 80 bass, like everyone else. Our lessons were held in St. Dennis in one of the primary school rooms. For our first meeting, we’d told everybody who was interested to come along to one of those rooms and so we ended up with roughly five or six members to start with.

Q: Did you ever find it difficult to learn?

A: I did at first, but I picked it up as I went along. Really, I had finished with it by the time we got on to more complicated things so I never learned the more difficult pieces.

Q: Why did you stop playing the accordion?

A: I played the accordion from when I was twelve until I was about sixteen. I stopped because I had other interests by the time I was sixteen and around that time I had started seeing my first boyfriend who I am still married to now.

Q: Who was your teacher?

A: His name was Raymond White. He wasn’t all strict and stern like most teachers could be. He made it fun for us so I really enjoyed it. He never let it get too serious! He had his own band before us called The White Aces who all played accordions too.

Q: Was there a group of you?

A: The five or six of us called ourselves The Accordionettes. We played in old people’s homes a few times and we also played in a St. Dennis pantomime once in 1959. The pantomime was called Robinson Crusoe and we enjoyed playing in it. As well as that, we also played in St. Columb church hall for three nights.

Q: Did you ever play on your own?

A: I played on my own a couple of times but I was too nervous and I didn’t really enjoy doing it. I enjoyed it more with the band. I played on my own in Lanjeth chapel and in a talent competition in 1958 where I won either second or third place – I can’t remember exactly. For that competition, I played a marching band song.

Q: What type of music did you enjoy playing?

A: I liked playing contemporary music of that time and marching band songs. I also liked listening to Jimmy Shand.

Q: Did you know any other girls who played the accordion?

A: Monica Oliver who lived next door to me in Burngullow played the accordion with us in our group, and another girl who played was called Gill Osborne. There was also a girl called Maureen Tamblyn from Fraddon, who I still keep in touch with now occasionally.

Q: Did you ever play any other musical instrument?

A: No, I never attempted anything else. It was a pity I gave up really but it was always good fun while it lasted.

You can do this here.