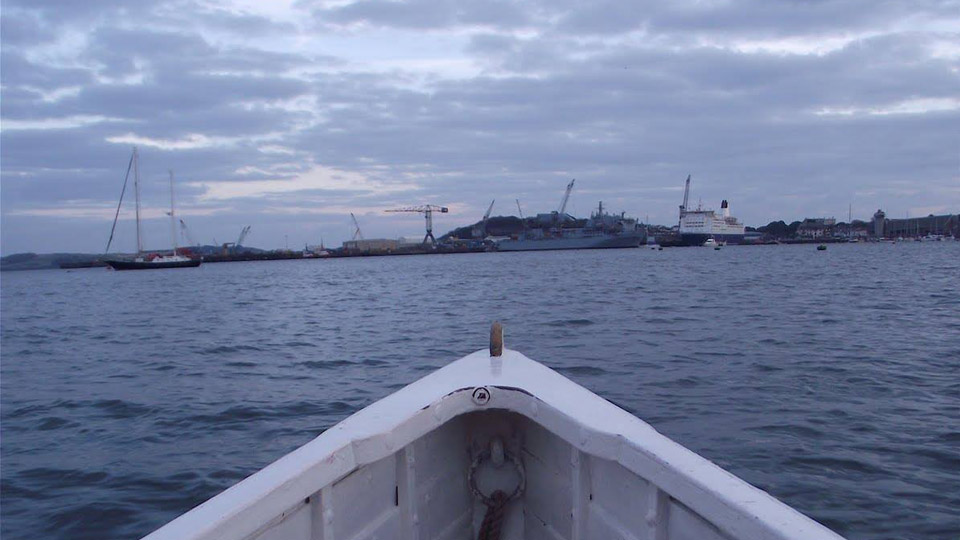 The first time I sat in a gig boat in Falmouth, I thought it would be an effortless float out to sea. However, I underestimated that rowing, like riding a bike – or any other sport for that matter, is not something you can just do. It is something that you have to work at to perfection. After the third time falling off my seat from the force of my oar getting caught in the water (a.k.a. catching a crab), I didn’t think I was strong enough to do it. I thought I should go back to being a ballet dancer – my physique certainly suited this occupation better than pulling a heavy oar through sea water. However, I did enjoy the experience and being out on the sea was too rewarding to give up after a poor start. My friend, a loyal member of the Falmouth Pilot Gig Club, reassured me that everyone starts somewhere, and I knew she was right.

After six months of regular novice rowing, I knew that it would have been foolish to give up. I recently read John Bishop’s memoirs which recalled his participation in a row across the English Channel for Sports Relief. I smiled when he mentioned how he too fell off the seat several times. I could relate to the feeling of letting other rowers down for being inexperienced. But he didn’t want to give up, and neither did I.

It does get easier, and although I can feel exhausted after a row, I know that I gave it my all. Pulling the oar through the water has become second-nature, however there is always room for improvement. It’s rewarding to put aside three hours a week to enjoy a rowing session. It’s a great way to meet new people from a range of backgrounds and age groups, and there is a real sense of team effort. For me, gig rowing helps to relieve the stresses of student life as well as the chance to make the most of living by the sea.

One thing that surprised me was the lack of information on Cornish gig rowing readily available. It appears that one of Cornwall’s native sports slips under the net for those wishing to learn about rowing. This means that very little is known, if anything, about the pilot gig boats of Cornwall unless you become a part of the community yourself.

However, I was fortunate to come across an inspiring blog, ‘Hear the Boat Sing’, which won the 2013 Rowing History Blog of the Year award. For anyone interested in rowing, I can recommend this as a great place to start. Tim Koch, a regular contributor, wrote about the time when ‘gig racing was born’ in the late 17th century. Gigs were originally working boats designed to take pilots to the ships that came into Falmouth docks. Due to the treacherous rocks beneath the water’s surface it was up to a well-trained pilot to navigate the ships to safety. However, just like today, rowing was a competitive sport, as whichever gig boat reached the ship first, got the job.

In Tim Koch’s two-part blog post, ‘The Revival of Cornish Pilot Gig Racing’, I learnt of the decline in Cornish gig rowing; a result of the inventions of engines and sails that replaced oars. However, Cornish rowing was saved from extinction due to interest in the sport in both Newquay and the Isles of Scilly. Ralph Bird was a key individual who revived the sport county-wide when gig rowing had almost died out in the 1980s. Bird designed a standardised model of the gig boat and set up the Cornish Pilot Gig Association. Bird made 29 boats as well as publishing several books, including ‘Devoran and its River: a Photographic History’. His commitment to the sport has proven a huge success with over 50 clubs now members of the association with over 130 gigs registered. According to the CPGA, ‘it is estimated that more than 7,000 people [and counting] are actively involved in gig racing’ today.

Nowadays, the competitive side of gig rowing is hugely anticipated in racing events which take place all along the Cornish coastline, the most famous being the annual ‘World Pilot Gig Championships’ on the Isles of Scilly. I recently attended a race in Gorran Haven, which gave me a taste of the races. My friend, emerging victorious from the boat after winning a race that day, tried to help me visualise the scale of the Isles of Scilly championships. ‘Imagine this,’ she said, ‘but with hundreds more boats lined up on the beach, side by side.’ I really did try to picture it, but it’s difficult when you’re sat on a beach which could not possibly accommodate that many boats. However, one thing I know is certain – the Isles of Scilly is the place to be if you want to experience the Olympic equivalent of gig racing in Cornwall.

I hope that this now thriving sport and community within Cornwall prospers for future generations to enjoy. It seems that Cornish gig rowing is taking a turn for the better, and has reinvented itself from working boats on the brink of extinction into something fast becoming a cultural phenomenon in Cornwall.